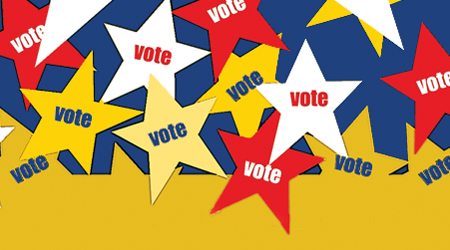 With early voting under way and the Nov. 6 Election Day approaching, the MTSU campus will provide multiple opportunities for those looking to satisfy their political cravings.

Here’s a summary of upcoming university-sponsored events related to the election. More events will be added to this list as needed; check back periodically for updates.

You can learn more about the special screening at http://mtsu.edu/events/election.php.

Viewers can enjoy free food and watch live, up-to-the-minute coverage from the university’s student TV station, MT-10, in the ballroom along with other local and national broadcasts and social media streams.

Read more about the event at http://mtsu.edu/events/electionnight.php. Sidelines, MTSU’s student newspaper, also will be updating election coverage at http://vote2012.mtsusidelines.com.

* Online exhibit featuring political jingles: The Albert Gore Research Center and the Center for Popular Music at MTSU have collaborated to present an online exhibit on “The History of Political Songs and Jingles in Tennessee.”

The exhibit features multiple sections such as “Brief History of Political Songs,” “Early Campaign Songs for Presidents from Tennessee” and “Politics and Music in Tennessee,” among others.

You can learn more about the exhibit at http://gorecenter.mtsu.edu/education/Political_Jingles/Politics_and_Music_in_TN.shtml.

* MTSU Poll results are out!: Republican presidential candidate Mitt Romney will likely take Tennessee. But by how much? Results from this annual statewide survey were released Saturday, Oct. 27. Read more at http://mtsunews.com/mtsu-poll-fall-2012/.