‘MTSU On the Record’ scientist..

President Sidney A. McPhee and other administrators and staff from throughout campus travel thousands of miles and make five overnight trips to recruit students for 2020 and beyond. 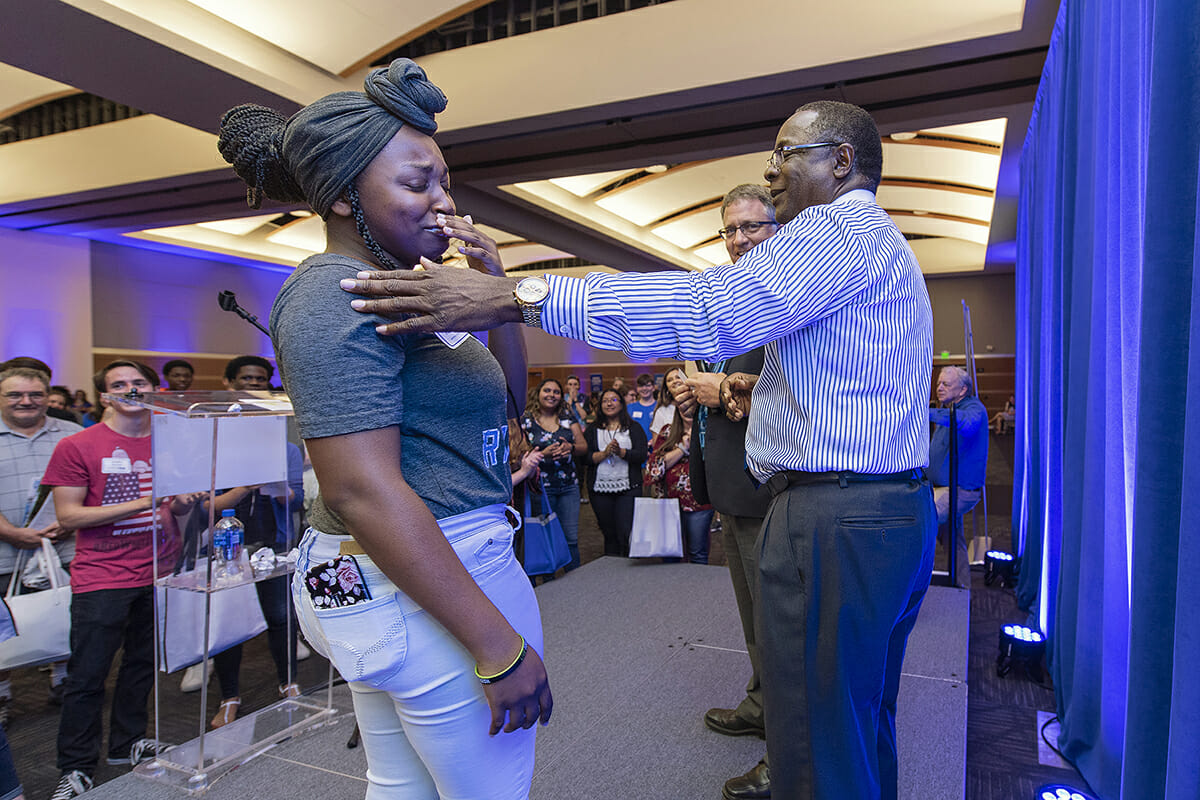 This year’s True Blue Tour kicks off for the second year in Murfreesboro. A student reception in the MTSU Student Union Ballroom  is set for 6 p.m. Wednesday, Aug. 21.

The tour resumes a month later in full-speed-ahead mode as the team prepares for 13 more stops across Tennessee and in the border states of Alabama, Georgia and Kentucky. 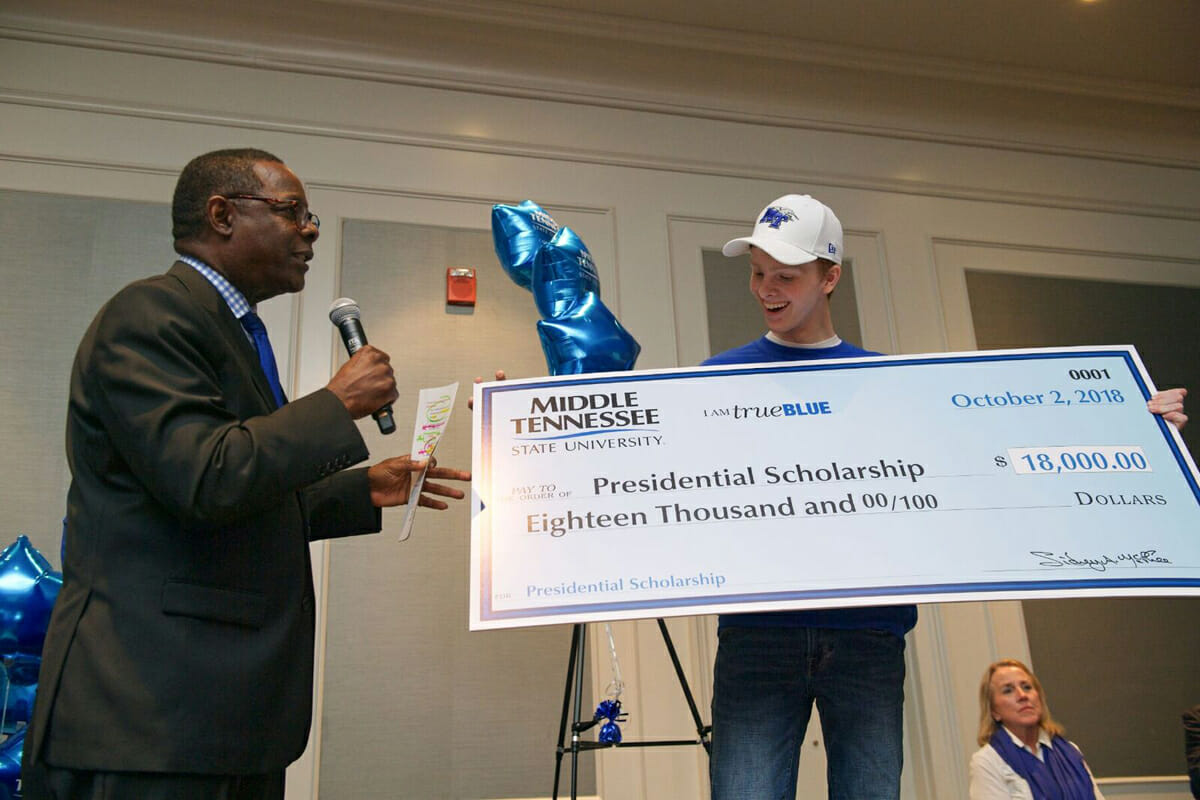 Grant Hampton, 18, right of Thompson’s Station, Tenn., an Independence High School graduate who is now an MTSU freshman, smiles and holds a large replica of an $18,000 check representing the new expanded Presidential Scholarship. MTSU President Sidney A. McPhee, left, announced the increased scholarship in early October 2018 during the MTSU True Blue Tour visit to Franklin, Tenn. On the first 2019 tour stop in Murfreesboro, McPhee will announce the creation of another new guaranteed scholarship that will make a whole new group of high achievers scholarship-eligible for the first time. (MTSU file photo by Andy Heidt)

In 2018, MTSU introduced a new Presidential Scholarship — $4,500 per year and $18,000 overall for four years — for students with an ACT score of 25 to 29 and GPA of 3.5 or higher. That’s the largest scholarship for students in that ability range of any public university in the state.

This year, on the first tour stop, McPhee will announce the creation of yet another new guaranteed scholarship that will make a whole new group of high achievers scholarship-eligible for the first time.

For 25 years, MTSU has been hitting the road to recruit prospective students and meet their parents or guardians, taking that effort to another level with the launch of the True Blue Tour in 2012.

“When I came in 1996 as director of housing,” recalls Dr. Deb Sells, now vice president for student affairs and vice provost of enrollment and academic services, “one of the first things I was asked to do was to hop on a bus with admissions and all the deans, and we drove to Knoxville for a recruiting event.”

Twenty-four years later, Sells still takes the bus, now riding up front, as the recruiting events have expanded in scope and depth. 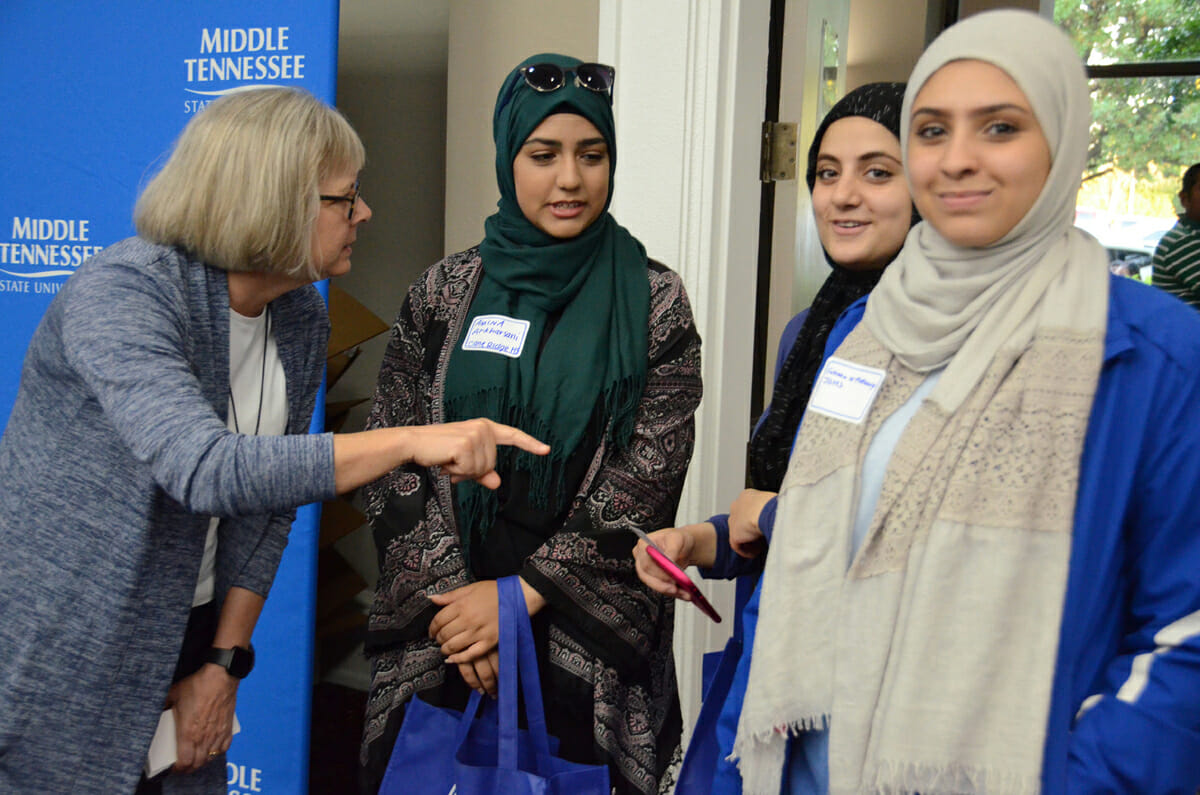 MTSU meets with high school counselors and community college staff for noontime lunches at 12 of the stops and with prospective students and their parents or guardians for two-plus-hour sessions in the evening at every venue.

Led by McPhee, Sells and undergraduate admissions director Linda Olsen, MTSU staff share news about the Murfreesboro university’s 300-plus programs and offerings, facilities and much more as it recruits outstanding students.

“We’re looking forward to another great year on the True Blue Tour,” said McPhee, who began going on recruiting trips in 2001 several months after becoming MTSU’s 10th president. “We enjoy meeting prospective students and their parents each year.”

“It’s a wonderful opportunity for them to hear firsthand from MTSU representatives in their own backyards and receive important information about admissions and financial aid, and the unique educational experience we offer,” McPhee added.

New event venues include The Westin Huntsville in Alabama and TownPlace Suites in Clarksville. 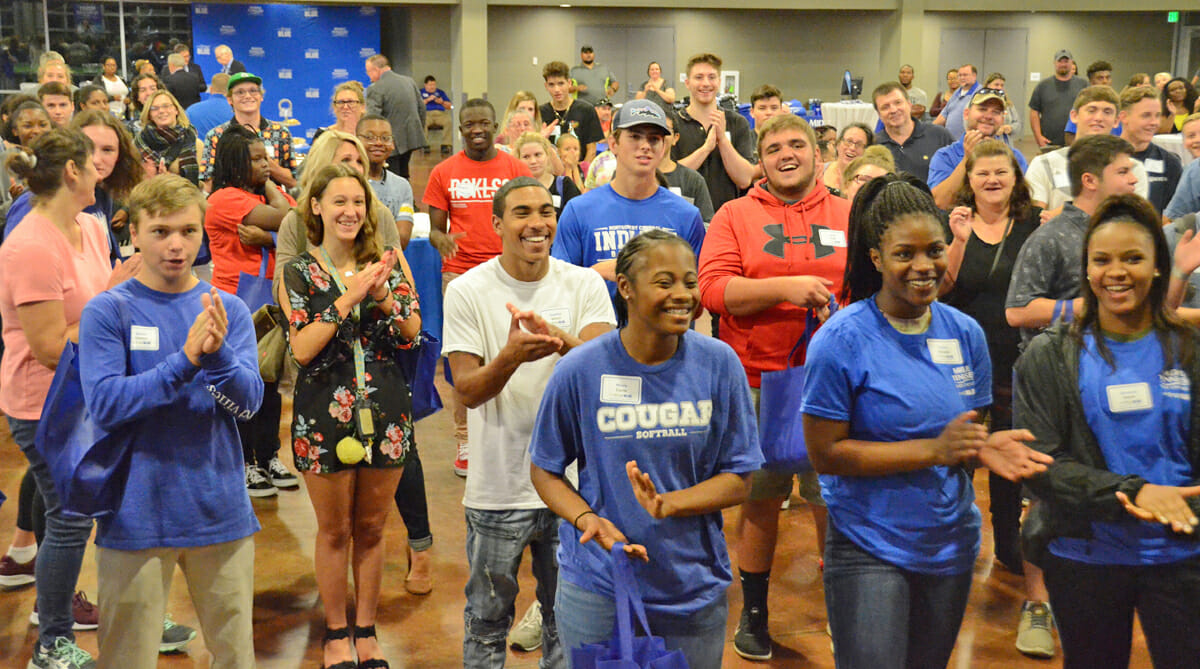 Students attending the MTSU True Blue Tour in September 2018 in Clarksville, Tenn., applaud President Sidney A. McPhee’s presentation of a scholarship. MTSU will bring the tour and an announcement of another guaranteed scholarship back to Clarksville Thursday, Oct. 10, with a luncheon for counselors and community college staff and 6 p.m. student reception, both at TownePlace Suites, 120 Fair Brook Place. (MTSU file photo by Randy Weiler) 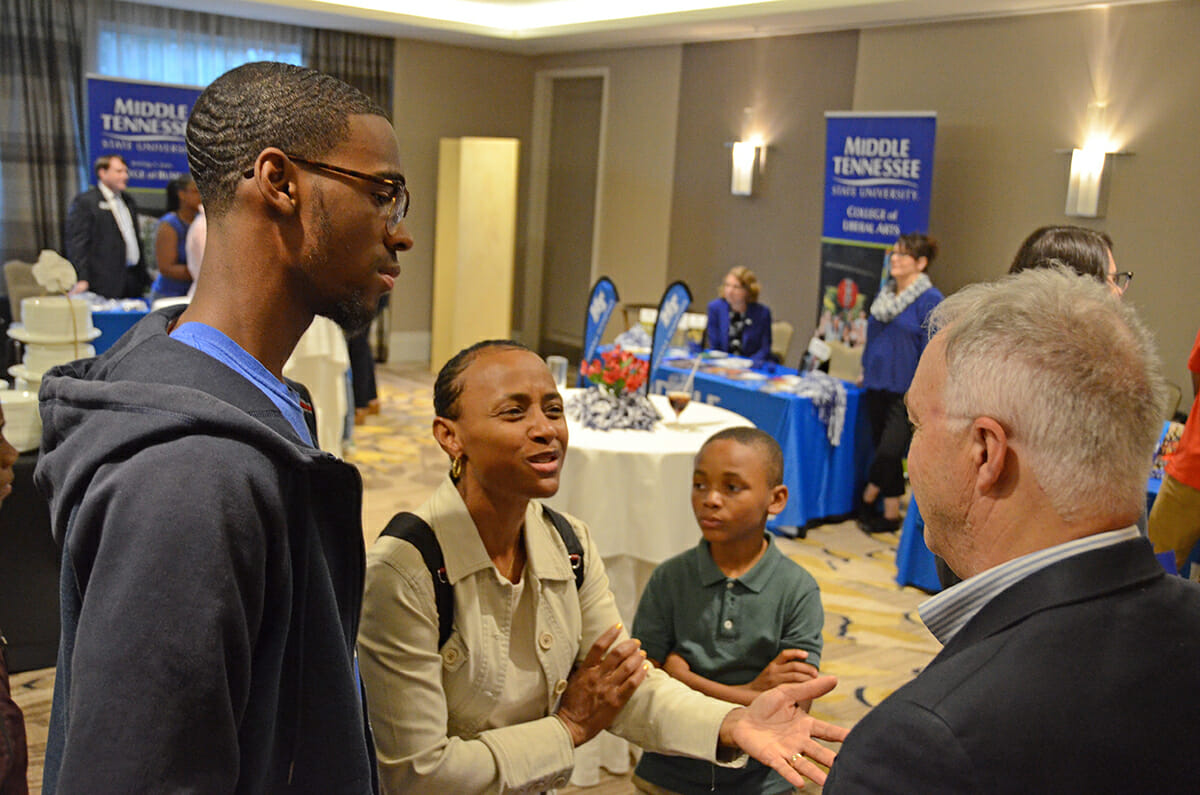 Teresa McKenzie, center, asks questions about the variety of programs within the College of Media and Entertainment while then-dean Ken Paulson, right, and Ryan McKenzie, 17, left, then a junior at Arabia Mountain High School in Lithonia, Ga., listen during the October 2018 MTSU True Blue Tour visit at the Hyatt Regency Perimeter in Atlanta, Ga. Also shown is Rance McKenzie, 9. Ryan McKenzie later won a $1,500 scholarship at the event. MTSU and the tour return to Atlanta Wednesday, Oct. 30. (MTSU file photo by Randy Weiler)