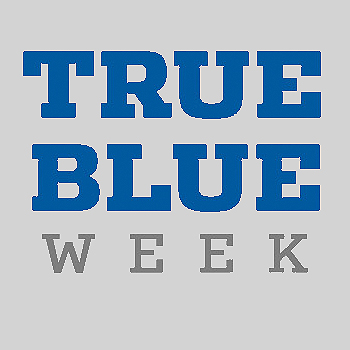 The entire week — which began Monday, Jan. 21, and culminates with the hardwood battles on Saturday, Jan. 26, and Sunday, Jan. 27 — has been proclaimed “True Blue Week.”

Spearheaded by the MTSU Athletics Department, the week’s aim is to build fan support and turnout for the WKU games, which feature a men’s contest tip-off at 3 p.m. Jan. 26 for a national broadcast audience on ESPN2. The women’s contest will start at 2 p.m. Jan. 27.

“The goal is to get as many people as possible to the basketball games on Saturday and Sunday against Western Kentucky,” said Marco Born, MTSU assistant athletic director for ticketing and marketing.

Blue Raider fans should wear blue throughout the week and fly their MTSU car flags. Staffs of local businesses and restaurants around town are encouraged to wear blue, and businesses with marquees outside are asked to promote the games.

“This is possibly the last time or one of the last times we’re going to play Western as a conference rival with our pending move to Conference USA,” Born said. “That rivalry has always been great because of the proximity of the campuses, about 100 miles apart, which has made for great basketball and a great atmosphere.”

As announced in late November, MTSU athletics will be leaving the Sun Belt Conference no later than July 2014 to join Conference USA.

“I think it’s important for our fans to come out to support these games this week,” said Born, who pointed out the “Plus 1” promotional push for season ticket holders to bring one extra fan with them to the games. “If every fan does that, we’ll fill the arena up pretty quickly.”

Click on the image to learn more about being “True Blue.”

The week also highlights the university’s beliefs expressed in its True Blue Pledge, which spells out four core values: honesty and integrity; respect for diversity; engagement in the community; and a commitment to reason, not violence. You can learn more at www.mtsu.edu/trueblue.

All of those values were in focus Jan. 21, when MTSU’s Center for Student Involvement and Leadership and the Office of Intercultural and Diversity Affairs presented the Dr. Martin Luther King Celebration Program in the Keathley University Center Theater.

Members of the MTSU community gathered to honor King’s life and legacy. The theme for this year’s celebration, like the university’s upcoming Black History Month celebration in February, is “At the Crossroads of Freedom and Equality: The Emancipation Proclamation and the March on Washington.”

Other events scheduled this week by the Center for Student Involvement and Leadership that reflect the “True Blue” spirit include:

• A Student Organization Fair , which will be held from 10 a.m. to 2 p.m. Wednesday, Jan. 23, in the Student Union ballroom. Students are being encouraged to visit with all of the registered student organizations on hand and learn how they can be more involved in the campus community; and

• An International Welcome Reception, which is scheduled on Friday, Jan. 25, from 4 to 6 p.m. in Student Union Room 330. New and returning international students will be the guests of honor at this gathering.