Greeks urge MTSU to ‘take the .. 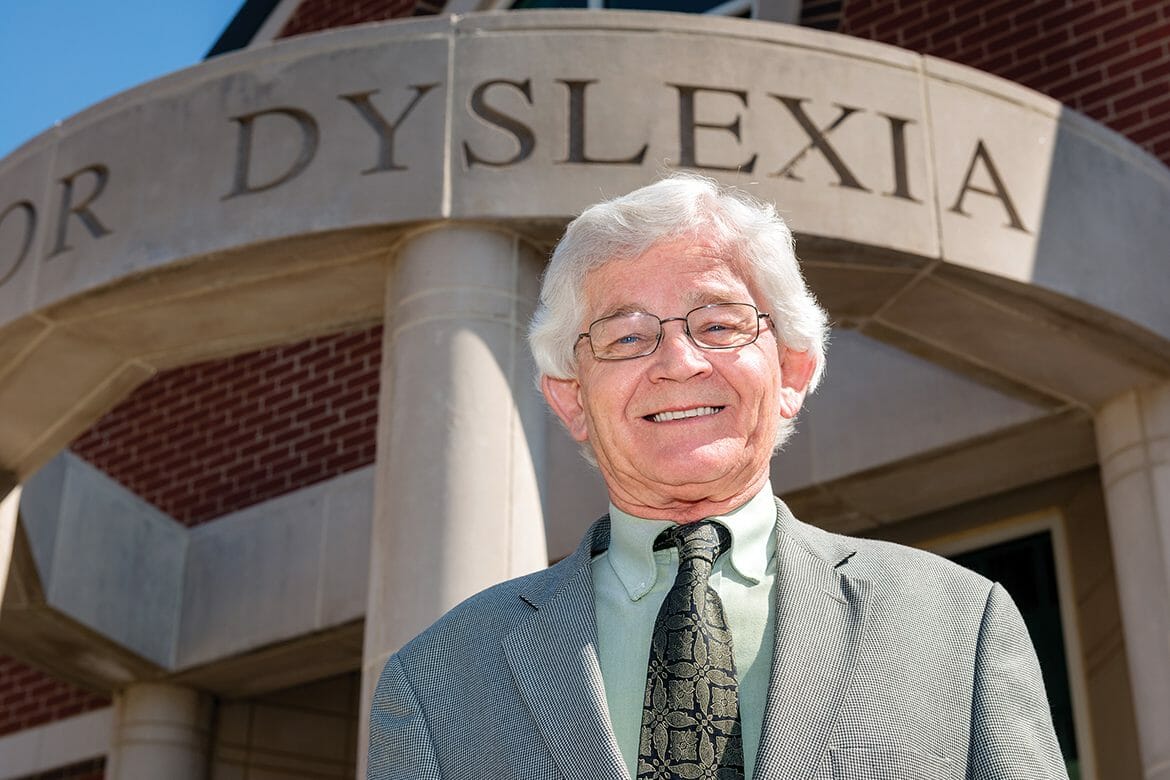 Envision standing near the entrance to a walled garden. Inside is a fascinating place where letters and words take root and bloom into meaning. People happily come and go at will through the gate, but not you. No matter how many times you try or how hard you push, it won’t open. It is embarrassing to have others watch you. You feel discouraged. Eventually, a sense of failure takes root, and you walk away.

While metaphorical, this is a picture of what those with dyslexia regularly experience when trying to read, write, or spell.

Although most of us take it for granted, reading enables us to step outside our own experience, see the world through different eyes, and gain new perspectives that inform our worldview. It isn’t any wonder, then, that a person’s reading ability can prove to be a significant barometer of success in life, whether in academics, a career, or even one’s health.

Dyslexia — which has nothing to do with a child’s intelligence and desire to learn (or even good teaching) — is like the garden wall described above: a barrier to literacy. Failure to clear that barrier can produce negative consequences not just for students but also for society as a whole. Illiteracy often leads to undesirable social outcomes ranging from unemployment to homelessness and poverty.

The good news is, students with dyslexia can learn to read, and they can do so through the types of specialized instructional approaches employed at the Tennessee Center for the Study and Treatment of Dyslexia at MTSU.

Mention dyslexia and most people have some awareness of the term but no clear understanding of its meaning or its impact. Dyslexia affects 10 to 20 percent of the population.

In 1993, the Tennessee General Assembly established the Tennessee Center for the Study and Treatment of Dyslexia, which is part of the MTSU College of Education, to assist K–12 students and their families, teachers, and other professionals grappling with the problem. The work of the center has touched the lives of thousands of people—helping them find new keys to open the gate—in 94 of the state’s 95 counties. 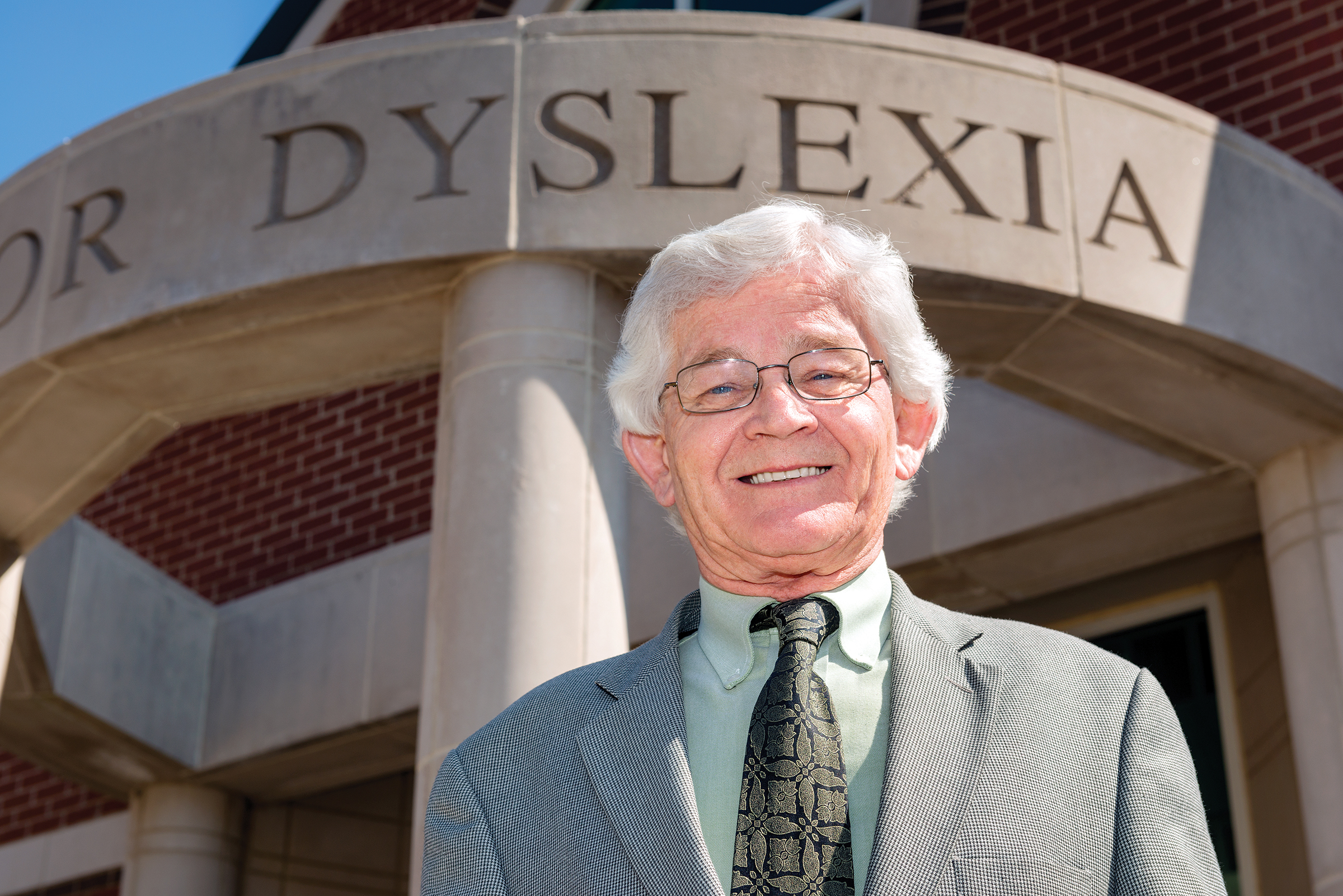 Dr. James “Jim” Herman, director of MTSU’s Center for the Study and Treatment of Dyslexia, pauses outside the center’s entrance on North Baird Lane. (MTSU photo by Darby Campbell)

Dr. James Herman, the center’s director, is enthusiastic about the work being done.

“This is an exciting place,” he says. “We are constantly moving forward. The staff regularly meets to discuss the latest research and cutting-edge technology. We are all working to make dyslexia known for what it is and what it isn’t.”

What it is, according to the International Dyslexia Association, is “a specific learning disability that is neurological in origin, characterized by difficulties with accurate and/or fluent word recognition and by poor spelling and decoding abilities.”Struggling to read hinders vocabulary growth and reading comprehension and can lead to low literacy and poor self-esteem.

It’s important to understand that dyslexia is not a disease; it cannot be cured. Nor does it equate to intelligence; many dyslexics function at an average to above-average level. However, when detected early, dyslexia can be successfully addressed with education, training, and patience.

An example of someone who refuses to let dyslexia define him is Justin Lowe, 22, an MTSU junior from Murfreesboro majoring in anthropology. Lowe’s second-grade teacher at Homer Pittard Campus School recognized his student’s struggle and sent his family to the center for help.

“The people at the center helped me realize I should not focus on my weaknesses but rather my strengths,” he says.

“I can get the same thing achieved by taking a different route, but the outcome is the same. You learn to think outside of the box.”

Lowe remembers being motivated when he learned that celebrated military general George Patton had dyslexia.

“It made me realize that if I put my mind to it, I could do anything I wanted and dyslexia was not going to hold me back,” he says.

Other well-known Americans who have this disability include Jay Leno, Henry Winkler, Tom Cruise, Cher, and Anderson Cooper. Most struggled in school and couldn’t read well and were told they were not living up to their potential or, even worse, that they should quit school.

“Students with dyslexia are always going to struggle, but we can help. It is not scary; it is workable,” he says. “I believe all students can be taught to be successful. There is not one child who cannot be taught to read better.”

The same passion to help children succeed is the motivation that led Murfreesboro resident Kitty Murfree to lay the foundation on which the center was built. In the mid-1980s, she became keenly aware that the needs of students with dyslexia were not adequately being met in Tennessee.

“Dyslexia was a hidden element which families tried to quietly work with at the time,” said Murfree. “Testing was available at Vanderbilt, but after talking with teachers it was evident there was no real place to go for help.”

She responded by endowing the Katherine Davis Murfree Chair of Excellence in Dyslexic Studies at MTSU in 1988.

“Children are my first love. It became evident to me we had a big problem, with few resources,” said Murfree, who has served for years on the board of the Monroe Carell Jr. Children’s Hospital at Vanderbilt. “I have always been a person that if you have a problem, you go after it.”

After a national search, Dr. Diane Sawyer, who was a professor in the Reading and Language Arts Department at Syracuse University, started as the new chairholder and faculty member in January 1990.

“Diane did an absolutely magnificent job,” said Murfree. “This is one of the things that put MTSU on the map. It is a great asset. Nobody else in the state had anything else like it.”

Reminiscing about the program’s humble beginnings, Sawyer says, “My first ‘office’ was half a dorm room that I shared with a part-time secretary and graduate assistant that actually sat on the heating and air unit located
on the wall.”

Shortly after arriving, the new chair was asked to testify before the Tennessee State Committee on Education about dyslexia. Later, to help address the challenges she was encountering across the state, she asked the General Assembly to provide funding to establish the center.
With the assistance of then–state senator Andy Womack of Murfreesboro (who chaired the Senate Education Committee) the money was appropriated in 1993. In January 1994, the Tennessee Higher Education Commision gave the final stamp of approval for the center to be a
permanent part of MTSU. Its first home was at what was then Central Middle School on East Main Street. Sawyer became the first director while maintaining her chair responsibilities.

“Dyslexia was often described as the hidden disability,” Sawyer says. “I knew that the detail and complexity of the work we were doing at the time was unique. It gave me an opportunity to do something that previously didn’t exist.”

Another milestone occurred in 2001, when the current 4,300-square-foot building opened on the edge of campus at the corner of Baird Lane and Elrod Street. The brick building doubled the center’s size and was made possible with assistance from the MTSU Foundation and a $1 million grant from the nonprofit Murfreesboro-based Christy-Houston Foundation.

After years of groundbreaking research, Sawyer retired from the university in 2010.

An extensive annual calendar of professional development is offered to help educators recognize, evaluate, and provide learning options for dyslexic students. This includes the Ron Yoshimoto 40-Hour Orton-Gillingham training in July. In August, Deborah Simmons, a College of Education and Human Development professor at Texas A&M University, will be the keynote speaker for the Second Annual Reading Conference. (The 2013 inaugural conference was attended by 250 individuals with four universities represented.) The annual Fox Reading Conference is made possible through an endowment established by the late Tom Fox and his wife Elizabeth.

Both parents and teachers can attend the Saturday Dyslexia Success Series Workshops, held monthly except during the summer. Also, the staff can customize specific training programs for educators on- or off-site. A search is ongoing to fill the Murfree Chair of Excellence in Dyslexic Studies.

For parents who think their child may have dyslexia, Herman suggests they talk with the student’s teacher or principal or call the center and request an assessment.

“We are happy to work with all parents and their children. When prior testing has been done by the schools, it gives us a broader base of information to help the student,” Herman says.

Once the necessary funding is in place, the director’s plans for the future include:

“We care deeply for each student who comes through our doors,” said Herman. “We’re not just going to talk about what we can do, we’re going to do something about it.”