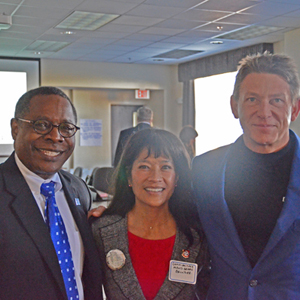 Clarifying its vision and brainstorming about ways to better support student veterans in higher education, the Tennessee Veteran Education Task Force met Feb. 21 at the James Union Building on the MTSU campus.

Many-Bears Grinder, commissioner for the Tennessee Department of Veterans Affairs and the chair of the task force, called for the group to clarify its overall vision based on ideas from its first meeting. After some discussion, the task force agreed that its aim is to help Tennessee become the No. 1 state in the country for veteran educational achievement and employment.

According to the governor’s office, the task force is charged with:

MTSU President Sidney A. McPhee welcomed the group, which  Gov. Bill Haslam created in November 2013 to better assist combat veterans returning to the classroom. The 10-member group is working to find solutions for the sometimes unique hurdles that veterans face in pursuing an advanced degree or certification.

McPhee praised the efforts of MTSU faculty and staff to position the university as a leader in serving student veterans. MTSU has been recognized for its support for student veterans by Military Times in its “Best for Vets: Colleges 2014” rankings and by G.I. Jobs magazine, which placed MTSU on its 2014 Military-Friendly Schools List for the third consecutive year.

“We truly believe at MTSU that our actions mean more than rhetoric,” McPhee said. “We believe that if it’s truly important, then we should invest in it.”

MTSU was the first school in Tennessee with an on-campus representative for VetSuccess, a collaboration between the university and the U. S. Department of Veterans Affairs to provide obtain assistance and peer support for students with military service.

“It’s really important and an honor to hear from our student veterans,” said Grinder, who listened intently as MTSU student Sean Martin, a junior sociology major and only student member of the task force, gave an in-depth presentation on the needs of student veterans.

Martin, a U.S. Marine Corps veteran who also served in Iraq, emphasized that concrete support from top education administrators was critical. Martin, who said he has been researching the issue of student veteran support for more than a year, offered a variety of recommendations for the group, including:

“We’re seeing more veterans coming to higher education, rather than the workforce, to get their degree,” Martin said. “Task forces are extremely vital. They are pretty much the linchpins on your campus.”

MTSU has a standing Veterans and Military Affairs Committee, as well as a student-led veterans group, Blue Raider American Veterans Organization, or BRAVO. Both had representatives at Friday’s meeting; Martin is a member and former officer of MTSU’s BRAVO.

Dr. Hilary Stallings, manager for recruitment and resources for the MTSU College of Liberal Arts, is an adviser to the task force.

McPhee praised BRAVO president and Army veteran Malcolm Stallard for his group’s work in helping the roughly 1,000 student veterans at MTSU with their transition to and progress on the Blue Raider campus. The sophomore social work major, who served in Iraq from 2009 to 2010, alsoattended Friday’s meeting.

The Veterans Education Task Force is part of the governor’s “Drive to 55” initiative to raise the number of Tennesseans with a certificate or degree beyond high school from where it stands today at 32 percent to 55 percent by the year 2025.

The task force, which will present its recommendations to the governor in June, is scheduled to next meet March 28 at Austin Peay State University in Clarksville and April 28 at the University of Memphis.

In addition to Martin, the task force members include: