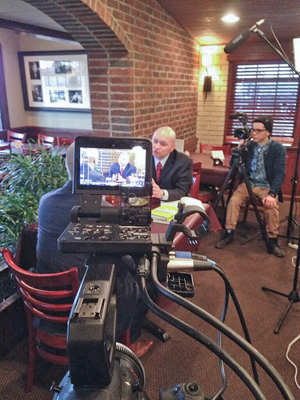 A recent installment of MTSU alumnus Micheal Burt’s reality TV show not only benefits the contestants he coaches in leadership, but also the Boys & Girls Clubs of Rutherford County.

Following its debut on New Year’s Day, the second episode of “Zebras and Cheetahs” aired Feb. 23 on the CW Network. In it, Burt again coaches five contestants in a two-day leadership boot camp on “how to look different, run faster and be agile in today’s concrete business jungle” — to turn them into zebras and cheetahs for 2014.

MTSU alumnus Brock Patterson, executive producer of the show, said the latest episode is different from last month’s pilot in that Burt focuses more on teaching business leadership skills rather than life skills in general.

Leadership coach and MTSU alumnus Micheal Burt, center in sweater, is shown with children and officials from the Boys & Girls Clubs of Rutherford County as well as cast and crew for his “Zebras and Cheetahs” reality TV show during filming at the club’s Murfreesboro facility. (Submitted photo)

“Our initiative was to up the ante in finding people who wanted to do more for their business careers,” said Patterson, who is also an adjunct business communication professor in MTSU’s Jones College of Business. “Our goal was to help position the television show as a business show rather than a life coaching show.”

Contestants again competed three challenges: The Zebra Challenge — trying to understand what makes them unique; The Cheetah Challenge — determining how agile and quick thinking they can be; and The Final Challenge: appearing before a three-person board of advisers to make their pitch.

Raising funds for the Boys & Girls Clubs was the Zebra Challenge. Contestants spent time with some of the children at the club to discover what unique qualities the club offered. The contestants then raised almost $1,900, which local Realtor Kendra Cooke matched. The funds are enough to cover the cost of weekly fees for more than 100 students.

“The lessons that each one of the contestants learned is that they got to see how the money personally helped the children,” Patterson said. “It was incredible.”

Leadership coach Micheal Burt has a “crucial conversation” at Demos’ Restaurant in Murfreesboro with one of the contestants on the upcoming episode of Burt’s “Zebras and Cheetahs” reality TV show. At right is MTSU student John Martinez, an assistant cameraman for the program.

The Cheetah Challenge took contestants to The Ascent Indoor Rock Climbing facility in Murfreesboro, where the fastest climber earned a chance to pitch ideas on increasing the facility’s business to the owner.

All contestants then took their training from Burt and experiences from the challenges to pitch themselves to a board of advisers made up of Midstate restaurateur Peter Demos, Belinda Arender of F&M Bank and Mortgage and Scott Nagy of Reliant Realty.

The show title refers to Burt’s latest book, “Zebras and Cheetahs: Look Different and Stay Agile to Survive the Business Jungle.” It was co-written by Dr. Colby Jubenville, an associate professor in the MTSU Department of Health and Human Performance.

The show’s goal is to shoot seven episodes to make a full season. Taping of the next episode will be held March 21-22, and contestants are already being sought via social media and word of mouth.

“It’s all about network and relationships,” Patterson said.

Engage the show on social media now and throughout Sunday’s show, on Twitter @michealburt, hashtag #ZebrasCheetahs and also on Burt’s Facebook page.

MTSU student Jacob Cleaver climbs the rock wall at The Ascent in Murfreesboro to get into position to film the contestants competing in the “Cheetah Challenge” for the “Zebras and Cheetahs” reality television show on the CW Network. Cleaver works as an assistant cameraman for the program, which aired its second episode Feb. 23.