Tennessee’s arts-focused high school juniors and seniors spent most of June learning exactly how and why the show must go on at the 2020 Governor’s School for the Arts at MTSU.

Normally they’re a bustling presence across campus as they live in dorms and work long days — and nights — collaborating on and refining their art, dance, film, music and theater abilities.

This year’s pandemic-forced changes affected every facet of the summer residency program for the first time in 36 years, except the basics: creating, teaching and learning.

“We found out April 16 that we could go ahead and have our Governor’s School but we would have to be virtual … so we scrambled to get our act together,” said Dr. Raphael Bundage, professor of vocal performance in MTSU’s School of Music and director of the Governor’s School for the Arts at MTSU for the last decade.

“We have a very creative team, and we were able to deliver instruction to all the students in all the areas, so we’ve been sailing along.”

Enrollment at Governor’s School usually hovers around 300 students, nominated by their teachers and chosen by audition and portfolio review, from across the state. Bundage said leaders were thrilled to see this year’s virtual “student body” number 260.

The students, most of whom spent their spring learning online after their high schools turned to remote instruction, followed similar guidelines with their Governor’s School instructors via MTSU’s Zoom videoconferencing connections.

They interacted with their teachers and fellow students in virtual classrooms, then presented their theater monologues, dance rehearsals, instrumental and vocal exercises, filmmaking projects, and sketching, painting and sculpting processes, all online and from their homes.

“Your teachers and your guest artists and I, we’re just thrilled with the progress you’ve made and hope that you feel that too,” GSFTA dance coordinator Laurie Merriman, professor of dance at Illinois State University, told her students.

“We got through all of our online happening and you were fabulous. Dancers, I could not be more proud of you. Thank you so much for making this experience so positive for everyone around you.” 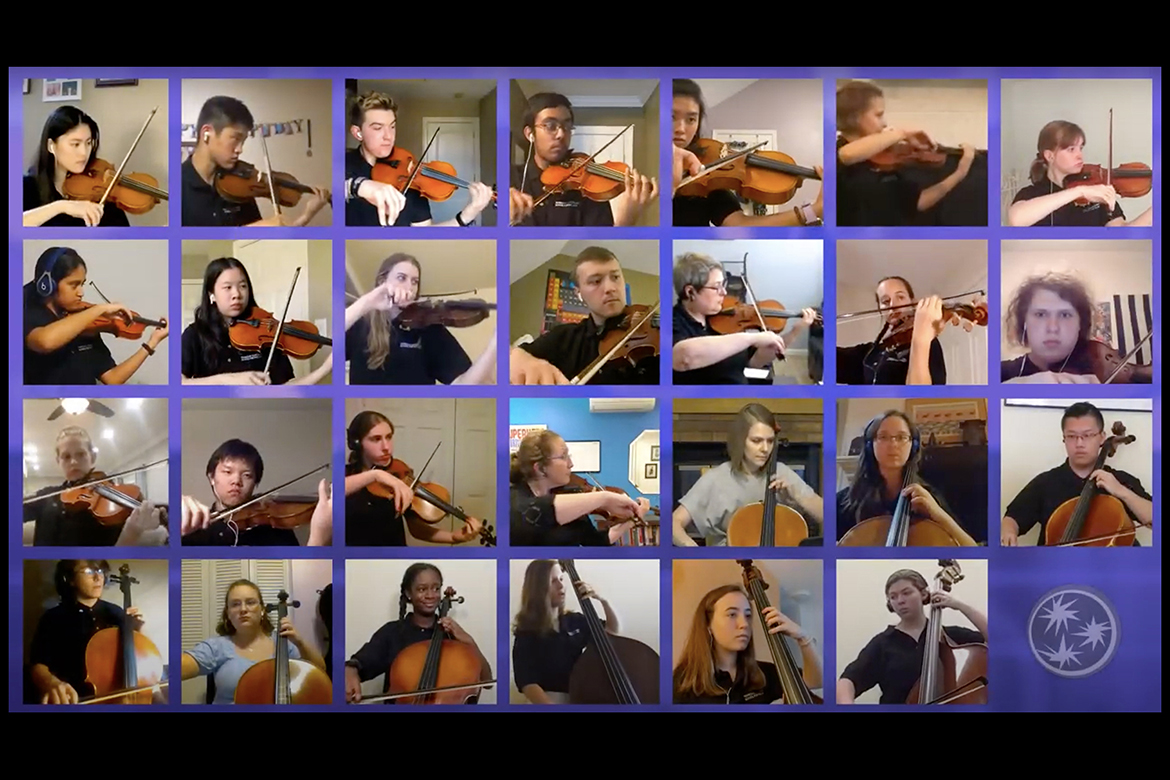 Members of the 2020 Governor’s School for the Arts String Ensemble perform an arrangement of Felix Mendelssohn’s “Sinfonia No. 2 in D Major, III. Vivace” for their final project. This was the first time in the 36-year history of the statewide summer program for high school juniors and seniors that students participated from home, in virtual classrooms and presentations, instead of on the MTSU campus. Click on the image to watch their performance. (Image courtesy of the Tennessee Governor’s School for the Arts)

Tennessee established summer residency programs in 1985 for young people in the arts, engineering and math, and international studies — one for each of the state’s three grand divisions — after encouragement from then-governor Lamar Alexander.

Today there are 11 different Governor’s Schools across the state, ranging from agricultural sciences to teaching, to immerse 11th and 12th graders in their chosen fields for three to four weeks; some give them college course credit, too.

The arts school at MTSU, which served as the Governor’s Schools pilot program in 1984, is Tennessee’s oldest and largest with more than 10,000 alumni. 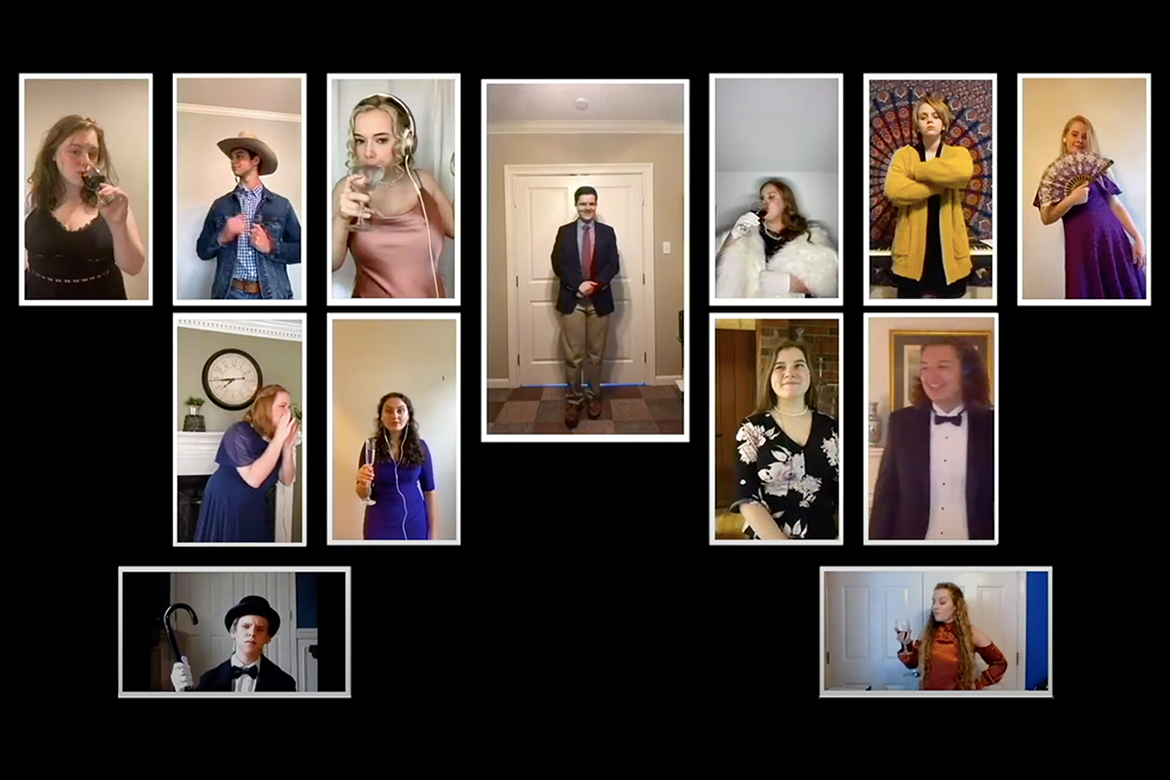 A group of this year’s Governor’s School for the Arts opera students perform “The Billionaire Birthday Bash,” an opera they wrote and recorded, for their final project. 2020 was the first time in the 36-year history of the statewide summer program for high school juniors and seniors that students participated from home, in virtual classrooms and presentations, instead of on the MTSU campus. Click on the image to watch their video. (Image courtesy of the Tennessee Governor’s School for the Arts)

“We have students who were in Governor’s School everywhere now,” Bundage said during the 30th anniversary celebration in 2014, checking off names of respected business leaders as well as “people in U.S. government, singers at the Metropolitan Opera in New York, countless numbers of teachers …

“Not everyone who attends our Governor’s School ends up in the arts. That mindset is there, though, and that creative capacity is there. Whatever field they end up in, that creative spark will be there and can be useful to them.”

Though the first virtual Governor’s School for the Arts has been a success, Bundage said that “nothing can replace live performance” and he’s looking forward to those opportunities again.

“I’ve been with Governor’s School since the late ’80s, and I wake up and go, ‘I should be in the music building. I can’t wait to see my group today!’ And so my ‘a-ha moment’ is they’re not there,” he said.

“They’re in their respective homes and they’re taking classes — in my area they’re taking the classes in music appreciation, in opera, they’re taking voice lessons — but all virtually. I probably have two or three ‘a-ha moments’ a day.”

Jeloux Enriquez of Murfreesboro’s Blackman High School noted that this year’s Governor’s School helped him and his fellow participants set the stage for both new experiences and new opportunities to share their craft.

“Keep in mind, this may not be the ‘normal’ you’ve been expecting, but it sure will be the new normal of tomorrow,” Enriquez said in the GSFTA 2020 Theatre Finale video. “Zoom will now be one of the main breeding grounds for creativity and collaboration in this new ‘newer world.’

“Even though we’re not in the same city, in the same building or in the same auditorium, we still want to connect to all of you using the power that theater possesses and present a whole new side of theater that you’ve never experienced before.”

Finale and other performance videos from the 2020 Tennessee Governor’s School for the Arts are available at www.youtube.com/user/TnGSFTA/videos. More information about the annual event is available at https://gsfta.com. 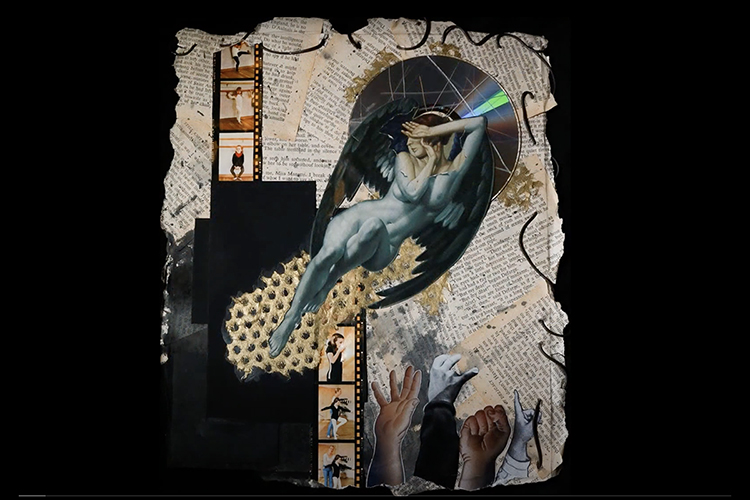 One of the images from students participating in the 2020 Governor’s School for the Arts Visual Arts Program is shown in a video available from this year’s event. This was the first time in the 36-year history of the statewide summer program for high school juniors and seniors that students participated from home, in virtual classrooms and presentations, instead of on the MTSU campus. Click on the image to watch the video. (Image courtesy of the Tennessee Governor’s School for the Arts)