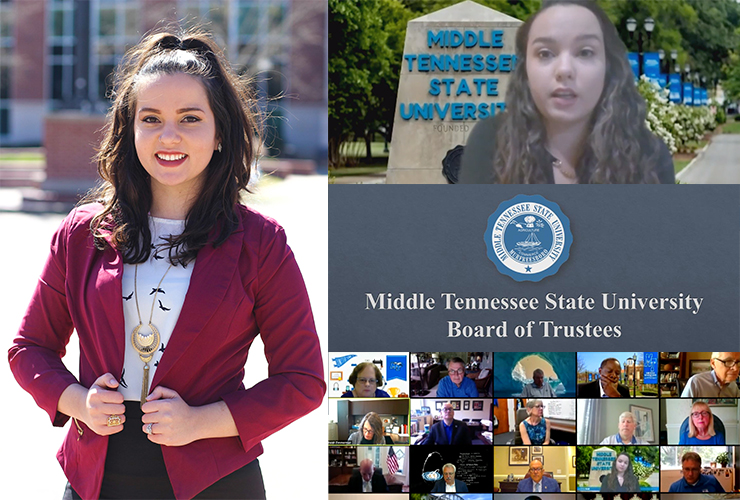 Under normal circumstances, the outgoing student member of MTSU’s Board of Trustees, Samantha Eisenberg, said she knew it would be a “big jump” for her to become a member of the university’s governing body.

Little did she know when she joined the board last year that her service would be underscored by the COVID-19 pandemic, creating an unprecedented set of circumstances for the university to navigate.

“I feel like being on the board, even having all of that experience under my belt, I felt like it was a big jump and a big difference in the kind of discussions being had,” said Eisenberg, a Knoxville area native who earned her bachelor’s in psychology in May 2019 and is now pursuing a master’s in clinical psychology on the Blue Raider campus.

Eisenberg had been a student leader throughout her undergraduate career at MTSU through involvement on various student organizations and the Student Government Association, where she served as an SGA senator, chaired various committees and wrapped up her senior year as the body’s attorney general.

Eisenberg said serving on the Board of Trustees was “a little intimidating” at first. However, she credited her fellow trustees for valuing her input. “It’s good to know that students really are being listened to and they are heard by the people making these really big decisions,” she said.

Discussions and decisions during the spring happened via teleconferencing after the board was forced by the coronavirus pandemic to suddenly transition from in-person meetings on campus to livestreamed Zoom meetings.

Eisenberg, like others, calls this “the new normal” as public health guidelines still recommend social distancing to stop the growing spread of COVID-19.

“We’ve all had to go through this together and learn the best way to do it,” she said, noting that she missed the informal board gatherings and university events where they could get to know each other better. “I was worried about the disconnect, but I feel like overall we did pretty well. At the end of the day, we’re all trying to come together and do what’s best for the university. … That’s the great thing about all of this technology because we found ways to navigate that.”

One big board decision about which Eisenberg is especially proud was the approval of President Sidney A. McPhee’s recommendation that tuition and fees remain flat for the coming academic year. With students and families facing economic uncertainty because of the pandemic, the decision showed that board members “want to do what’s best for the students and the university overall. … that we really need to look out for our students in a time of need.”

She also pointed to the university’s overall strong response to the pandemic such as the decision to allow some students who didn’t have viable alternatives to stay in on-campus housing for the remainder of the semester following the move to remote instruction.

With her term ending June 30, Eisenberg was given the opportunity at the board’s June 16 virtual meeting to share farewell thoughts. Eisenberg, who said she’s always felt her contributions were respected by other board members, took the opportunity to advocate on behalf of the university’s Black students, many of whom have participated in the widespread protests across the country against police brutality and racial injustice. 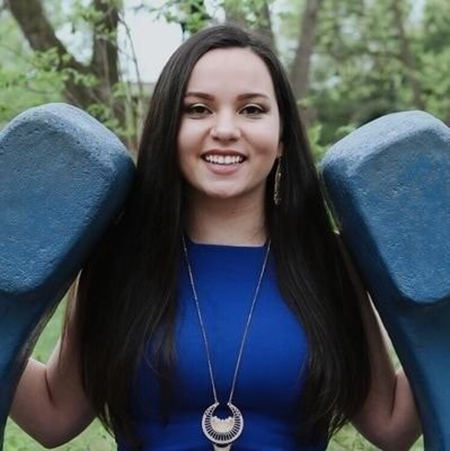 Outgoing Board of Trustees student representative Samantha Eisenberg is shown at the MTSU horseshoe in Walnut Grove in this undated photo. (Photo submitted)

“As leaders of this campus and the Middle Tennessee area, it is our job to listen to the needs of our Black students and make it a priority that they feel the same sense of safety and belonging here that we do,” Eisenberg told the board. “I have always taken pride in how concerned we are with student experience, and the constant innovation in how we improve it each year. It is crucial to use those motivations to evaluate the Black student experience and innovate on their behalf as well.”

In thanking Eisenberg, McPhee said it’s important that the university figures out how to get ahead of some of these social issues and that his administration “is committed to having the conversations that will lead to actions this coming year. … We are listening and we’ll continue to make efforts to make sure this campus is welcoming to all of our students.”

“MTSU has really changed me for the better,” she said.

The next student trustee, Delanie McDonald of Carthage, Tennessee, began her one-year term July 1. McDonald, who earned her undergraduate degree from MTSU in May, is the current student government president, a Buchanan Fellow and a Blue Elite tour guide. She plans to begin her master’s degree in higher education administration and supervision at MTSU this fall.