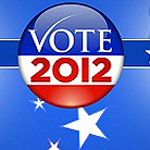 MTSU student journalists know precisely what their professional counterparts know: You’d better have a Plan B.

More than five months of planning for Election Day 2012 live coverage went out the window in just a few hours Nov. 5, thanks to a campus power outage that shut down operations for nearly a day and a half in the Center for Innovation in Media.

Viewers of MT10-HD, the student TV station, as well as an online audience and the audience for WMOT 89.5-FM and WMTS 88.3-FM and those attending a special election-night party Tuesday in the new Student Union Building’s ballrooms, however, were none the wiser.

“We’ve been meeting since July to plan our coverage, and then on Oct. 5, the power went out and we blew a breaker (in the Bragg Mass Communication Building),” explained center director Stephan Foust.

“We were dead in the water. Five months’ planning was out the window. We had to have a Plan B. And it was a great experience for the students.”

University maintenance and information-technology crews scrambled to get the center’s operations back online after power came back on Monday, overnighting replacement equipment from California and restoring systems in time to let the students go back to their Plan A.

“I am so proud of them,” Foust said as students prepared to go live as polls began to close around the nation.

“This operation had the feel of a professional project from the get-go. They’re ready for just about anything. They came prepared to every meeting and they are as professional as anyone can be.”

MT10 reported live from a special set in the SUB ballroom, part of a three-hour broadcast anchored in the Center for Innovation’s Studio 2.

Election results aired in real time on MT10, which broadcasts locally on Rutherford County Comcast Channel 10 and online at www.mt10tv.com, until 9 p.m.

Coverage was simultaneously broadcast during local cutaways on both WMTS-FM 88.3, the student radio station, and WMOT-FM 89.5, MTSU’s National Public Radio station. WMTS followed the simulcast with a live two-hour election news, analysis and talk show of its own.

The event was co-sponsored by the College of Liberal Arts, Student Programming and Activities, the University Honors College and the American Democracy Project. Production Services crews helped prepare the special MT10 set.

“This is the kind of problem you want to have,” said Rich Kershaw, director of student programming and activities at MTSU, as he watched the ballroom crowd elbow their way into prime TV-watching spots and discuss the election results.

“It’s a great collaboration between academics and student affairs to put on a great event. It’s also great that our MT10 is the only station that’s actually talking to real people on the street, people who’ve actually voted.”

Sidelines staffers updated their election website throughout the evening and published a special 24-page election edition of the newspaper Nov. 7.

The student journalists teamed up earlier this semester for breaking daily coverage of the Associated Press Media Editors national conference in Nashville, providing all the multimedia content for the APME blog, a daily video report and a special tabloid.

The APME recognized the Center for Innovation in Media this year for its efforts to converge MTSU student media and foster collaboration across media platforms.

“All this combined far exceeds anything student media have attempted in past elections,” Foust said, “and students, advisers and faculty are excited by the possibilities. We wanted the entire campus community to be part of it.”

You can watch a video on the coverage below.