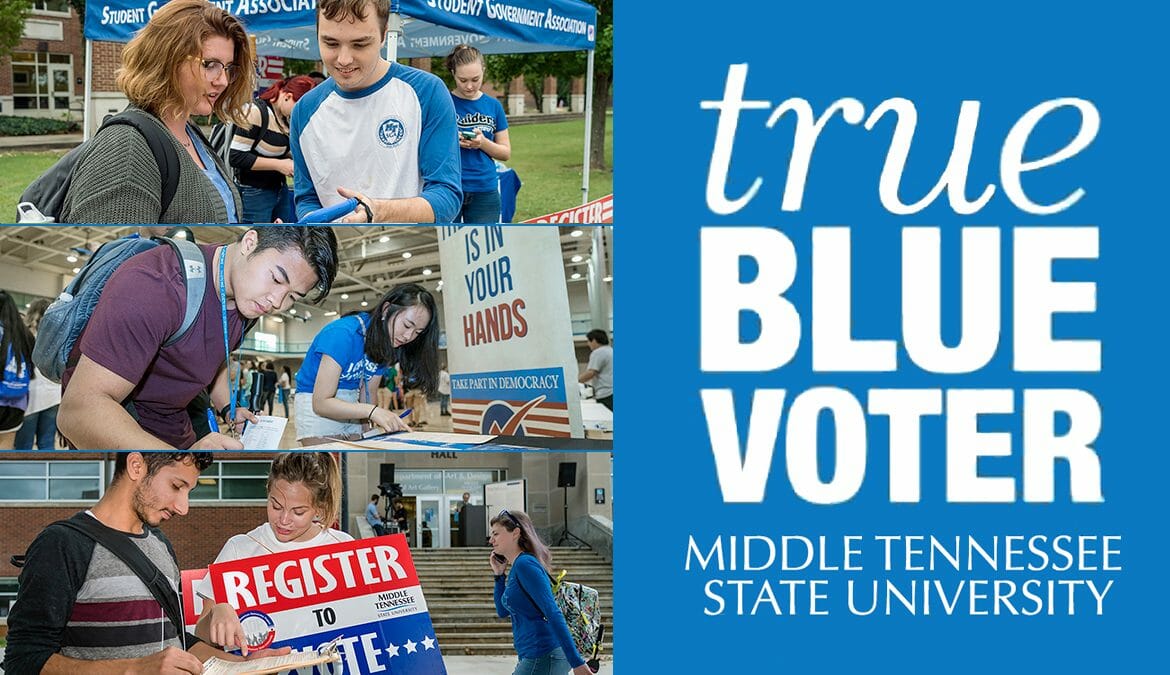 With Tennessee’s voter registration deadline of Tuesday, Oct. 9, fast approaching, MTSU is continuing its all-out efforts to register as many students — and members of the campus community — as possible.

In addition to on-campus tent and table locations where voter registration will be available on Monday, Oct. 8, and Oct. 9, MTSU will fire up initiatives through social media, email blasts, signage and online opportunities.

For the campus community, online buttons are posted on numerous MTSU webpages linking to www.mtsu.edu/amerdem, providing faculty, staff and students the convenience of registering online via the university’s American Democracy Project chapter.

Two contests are fueling the already dynamic civic fervor on campus. One is Tennessee Secretary of State Tre Hargett’s voter registration campaign challenge to universities across the state. Four- and two-year institutions and private universities are competing for three top prizes for number of students registered, social media presence and campus creativity.

The other competition is sponsored by TurboVote, a function of the nonprofit, nonpartisan organization Democracy Works. Backed by corporations including Amazon, Starbucks, Google and others, the “TurboVote Challenge” aims to help the United States reach 80 percent voter turnout by 2024.

For MTSU to win both of these challenges, students, faculty and staff are encouraged to register through the red “Register to Vote” button at https://mtsu.edu/amerdem/register-to-vote.php.

For those who haven’t yet registered but want to vote absentee in a home county far from MTSU, registration tents will be available on the lawn of Peck Hall on Oct. 8 and 9. Election officials will register prospective voters in person and help them fill out their absentee applications at the same time.

MTSU senior Salam Alkhafaji, left, of La Vergne, Tenn., looks over a voter registration form with American Democracy Project volunteer Sarah Williams in front of the university’s Todd Hall Sept. 17 during the campuswide celebration of Constitution Day. MTSU is urging prospective voters on campus who haven’t registered to do so by the Oct. 9 deadline at one of several sites. (MTSU file photo by J. Intintoli)

Long before external contests and the True Blue Voter campaign, however, MTSU was at the forefront in promoting civic awareness and encouraging citizen participation.

“We have always had an aggressive ‘register-to-vote’ program at MTSU, and we will continue to do so,” said Dr. Mary Evins, coordinator of the American Democracy Project for Civic Learning at MTSU.

Monica Haun, a political science major from Knoxville, Tennessee, is president of the student ADP and the university’s Campus Election Engagement Project fellow. The national nonprofit initiative to get students engaged in the electoral process provides Haun with training, webinars and tips on bias-free communication.

Haun said she thinks the youth vote will increase in the upcoming midterm elections on Tuesday, Nov. 6.

“I think people are realizing how important it is to vote and that their vote does matter,” Haun said. “I’d be really surprised if it stayed stagnant, just because there has been so much change in Tennessee and nationally.”

Registration efforts have been underway on campus since Aug. 27, the first day of fall classes, including during MTSU’s Constitution Day celebration Sept. 17, during Hargett’s Sept. 21 visit to campus and on National Voter Registration Day Sept. 25.

The ADP and University Provost Mark Byrnes took the lead this fall, asking faculty to take 10 to 15 minutes at the beginning of each class to ask students to register to vote on their digital devices. Tennessee legislators enacted online voter registration in 2017.

Incoming MTSU students Skyler Senesombath and Amy Lin register to vote as Zachary Brow awaits his turn at one of the True Blue Voter registration tables available this summer at the Campus Recreation Center during the CUSTOMS new student orientation sessions. Almost 200 students were registered during the ongoing initiative in partnership with the Rutherford County Election Commission. (MTSU file photo by J. Intintoli)

According to the National Study of Learning, Voting and Engagement, 44.5 percent of MTSU students voted in 2016, a .5 percent increase from 2012. The 2016 voting rate for all institutions of higher learning participating in the study was 50.4 percent.

Haun said she thinks social media will be a key factor this year.

“It’s on our Facebook; it’s on our Twitter; it’s on our Instagram,” Haun said. “It’s everywhere, because people are posting about going to protests or posting articles that they found interesting, which, I think, is very new to our society.”

Those who want who avoid lines at the polls on Election Day, the early voting period in Tennessee will run from Oct. 17 through Nov. 1.

Along with the special registration tents, new voters also can register during regular business hours through Oct. 9 at the following MTSU locations:

For more information, contact Evins at 615-904-8241 or amerdem@mtsu.edu; Dia Cirillo, president of the Murfreesboro branch of the American Association of University Women, at President@AAUW-Murfreesboro.org; or the League of Women Voters of Tennessee at 629-777-5677 or lwvtenn@gmail.com.

For information about the True Blue Voter Initiative, including links to voter eligibility details, visit http://mtsu.edu/TrueBlueVoter.