‘MTSU On the Record’ assesses ..

The MTSU historian who’s made a career of helping preserve significant landmarks around the country and teaching others to do the same is adding his myriad talents to the National Historic Landmarks Committee.

The National Historic Landmarks Committee is part of the National Park Service. Its plaques designate sites ranging from archaeological digs and homes to hospitals, businesses and schools around the country.

“We look forward to having the benefit of your advice as we fulfill our obligation to protect and preserve America’s great treasures,” Hutson told West in the letter formally announcing his four-year appointment.

A professor of history at MTSU since 1985 and the governor-appointed Tennessee State Historian since 2013, West also was the 2015 recipient of the university’s highest honor for its educators, the Career Achievement Award.

He is a native of Murfreesboro and an alumnus of MTSU and earned his doctorate in history from the College of William and Mary. He’s renowned nationwide for his work in 19th- and 20th-century Southern and Western history as well as architecture and material culture.

Leading his published works is the acclaimed Tennessee Encyclopedia of History and Culture; he continues as editor-in-chief of its print and online editions. The encyclopedia’s website is http://tennesseeencyclopedia.net.

As a member of the landmarks committee, West will meet twice a year with the group’s 14 members, including chair and park service board member Joseph Emert, to review and recommend nominations for the National Historic Landmark designation to the board. 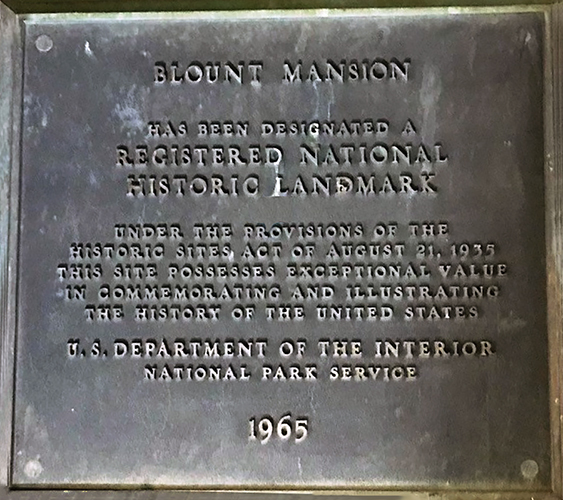 This photo shows the 1965 plaque designating Blount Mansion, the Knoxville home of William Blount, signer of the U.S. Constitution and one of Tennessee’s first senators, as a National Historic Landmark by the National Park Service. (Photo courtesy of Blount Mansion)

Tennessee has 30 sites designated as National Historic Landmarks, ranging from the Beale Street Historic District in Memphis to the Tennessee State Capitol in Nashville to the home of William Blount, signer of the U.S. Constitution and one of Tennessee’s first senators, in Knoxville.

Along with his work as director of the Tennessee Civil War National Heritage Area, West leads the CHP’s Teaching with Primary Sources Across Tennessee, a program of the Library of Congress.

He teaches courses in historic preservation, American architectural history, American material culture studies, and state and local history in the Department of History in MTSU’s College of Liberal Arts.

He’s also directed more than 100 Master of Arts theses and 30 doctoral dissertations of MTSU graduate students, who now work at universities, agencies and history institutions across the nation.