An 'American Idol' on Campus

MTSU faculty appeared on WGNS Radio’s “Action Line” program recently to talk about research surrounding evolution and religion, a collaboration to reduce stress and suicide rates among farmers and ranchers, and pandemic politics during a major election year.

The live program with host Bart Walker was broadcast on FM 100.5, 101.9 and AM 1450 from the WGNS studio in downtown Murfreesboro. If you missed it, you can listen to a podcast of the Oct. 19 program here. 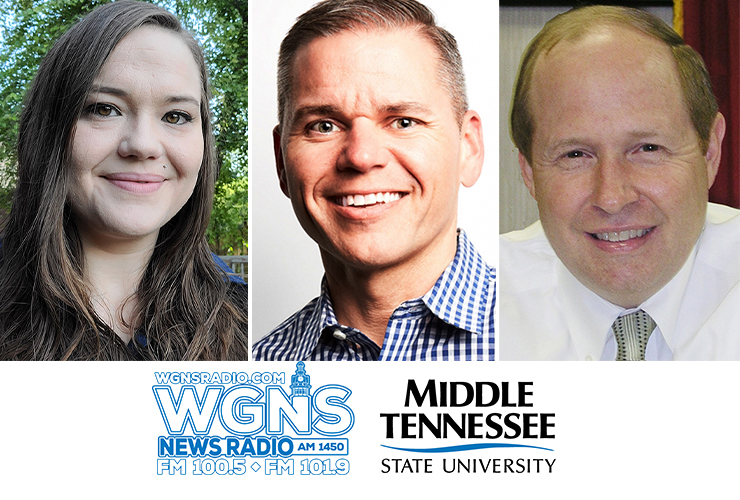 • Dr. Elizabeth “Liz” Barnes, assistant professor of biology education in the College of Basic and Applied Sciences, discussed her research efforts into reducing the tensions between science and religion.

A science education researcher, Barnes created an educational framework called Religious Cultural Competence in Evolution Education to create a more inclusive and comfortable environment for students of faith who are learning evolution in college. Recently, she has focused on how learning evolution could be particularly uncomfortable for people of color and women because of their rich religious backgrounds and beliefs and how this may contribute to their lack of representation in the biological sciences.

• Dr. Chaney Mosley, assistant professor of agricultural education in the MTSU School of Agriculture, discussed MTSU’s partnership with the U.S. Department of Agriculture and University of Tennessee Extension on a project to reduce farmer, rancher stress and suicide rates.

The USDA is funding four regional farm and ranch stress assistance networks, and MTSU is among more than 50 partners participating in the effort for the southern region. The three-year, $7.2 million southern region project will span 13 states and two U.S. territories, and is being coordinated by the UT Institute of Agriculture. Partner organizations in addition to MTSU represent agencies from land-grant institutions to government agencies, commodity and lending groups and nonprofit organizations.

• Kent Syler, a professor in the Department of Political Science and International Relations and political analyst, discussed the 2020 Election and pandemic politics.

Early voting has started in Tennessee, and like other states all over the country, election officials are seeing record turnout and long lines as eager voters — many in masks and practicing social distancing as much as possible — trek to the polls. Syler is also a frequent contributor to Nashville’s WSMV-TV Ch. 4 by providing political analysis various topics ranging from the presidential election to state politics to Supreme Court vacancies to pre- and post-debate analysis. He frequently involves some of his students along as part of their experiential learning.