Murfreesboro in the Civil War

‘This Could Be Big’ drives bigger interest in MTSU...

‘This Could Be Big’ drives bigger interest in MTSU hybrid 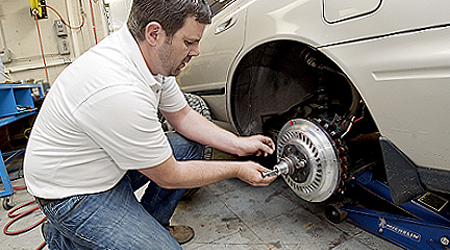 Television journalist Bill Weir and the ABC News/Yahoo! News “This Could Be Big” online collaboration has rocketed interest in Perry’s plug-in hybrid retrofit kit motor project into a new orbit.

The Sept. 6 “This Could Be Big” posting at the ABC News/Yahoo! News page had already generated more than 1,300 comments from online viewers before noon EDT today. (You can read the post by clicking on the graphic at right.)

The Honda, a research vehicle, has been retrofitted with electric motors in each rear wheel and a large lithium ion battery mounted in the rear of the vehicle.

As lithium-battery technology improves, Perry said, the battery size will be reduced in production models. The professor added that he hopes the retrofit kit will cost $3,000 when it’s eventually mass produced.

“This is just amazing,” Perry said of the buzz created by the Yahoo! video and an early-summer release to Newswise, a source that reaches journalists all over the world.

“Everybody loves the idea. Everybody wants it.”

You can watch Perry explaining the wheel-hub motor process below.

The video has has had 94,381 YouTube hits to date, and emails have been pouring in from around the world.

“I don’t know how many I’ve had,” Perry said, noting that messages have come from “India, Sri Lanka, Syria and all over the country.”

Perry also has been busy on the phone. The Yahoo! video generated a phone call from Cheryl Hanson of Prior Lake, Minn., 25 miles south of Minneapolis, who called on behalf of her husband, Mark, a mechanic for 30 years.

“The economy’s been such that we’re building our own business now,” Cheryl Hanson said. “You guys are doing great things. We saw the video and are super excited. It seems like a good fit and skill set for what we’re wanting to do.”

The Plug-in Hybrid Retrofit Kit is applied to a vehicle’s rear wheels. After switching on the traction motors, gas mileage can increase 50 to 100 percent. (MTSU file photo by Andy Heidt)

ABC’s Weir interviewed Perry, who serves as the Russell Chair of Manufacturing Excellence in MTSU’s Department of Engineering Technology, on Sept. 4 via Skype in the Telecommunications Building. Weir is co-anchor of ABC’s “Nightline.”

“I just don’t know where this is going to go,” said Perry, who has been working with Lou Svendsen, Tennessee Board of Regents university counsel, to approach companies with both U.S. and worldwide fleets of vehicles, especially those “interested in green technology, reducing the carbon footprint and savings in fuel costs.”

Perry had 40 patents in a 28-year career with IBM before coming to MTSU. He and his student-centered team have landed two U.S. patents for this project and are awaiting final approval on two more.