The Middle Tennessee State University WISTEM Center has received the 2021 Inspiring Programs in STEM Award from INSIGHT Into Diversity magazine.

The award honors colleges and universities encouraging and assisting students from underrepresented groups to enter the fields of science, technology, engineering and mathematics, or STEM. 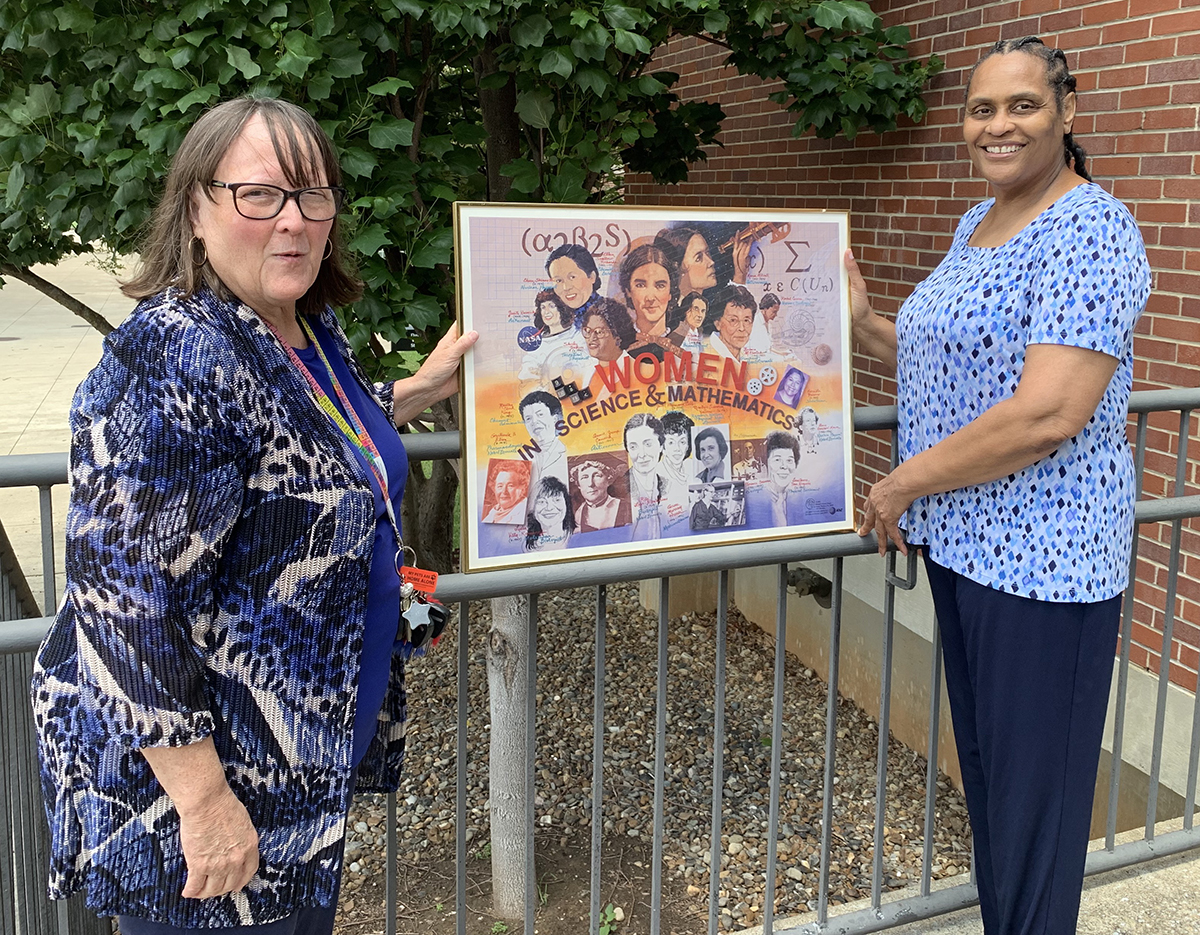 MTSU chemistry professor and WISTEM Center Director Judith Iriarte-Gross, left, and College of Behavioral and Health Sciences Associate Dean Barbara Turnage promote women in STEM at the university. Turnage nominated the center for a 2021 Inspiring Programs in STEM Award from INSIGHT Into Diversity magazine. The publication announced Monday, Aug. 16, the center would be one of nearly 80 programs recognized nationally. (MTSU photo by Randy Weiler)

MTSU’s WISTEM (Women in STEM) Center will be featured with nearly 80 other recipients in the September issue of INSIGHT, the largest and oldest diversity and inclusion higher education publication. The award was announced Monday, Aug. 16.

Inspiring Programs in STEM Award winners were selected by the publication based on efforts to inspire and encourage a new generation of young people to consider careers in STEM through mentoring, teaching, research and successful programs and initiatives.

“This is wonderful news,” said Judith Iriarte-Gross, MTSU chemistry professor and WISTEM Center director. “The center is very honored to be recognized by this national organization for our hard work over the years. Diversity is critical in STEM. Without diversity, what will the STEM workforce look like in the future?

“Many thanks to (College of Behavioral and Health Sciences) Associate Dean Barbara Turnage for the amazing application she submitted.”

The magazine selected the WISTEM Center because “it is home to several programs that encourage female students to pursue and succeed in STEM fields,” Turnage wrote in the nomination.

“The mission of the center is to realize the intellectual potential and utilize the expertise of women in STEM,” she added. “The goals are to maximize resources and opportunities for females to pursue STEM education and careers; to promote best practices of gender equity in STEM and to support female STEM professionals in their academic development and career growth.”

The center is home to the Tennessee Girls in STEM Conference (formerly Expanding Your Horizons in Math and Science or EYH), which celebrates its 25th anniversary in September, and other programs. Fifth through 12th grade girls learn from STEM professionals and participate in hands-on conference workshops. Iriarte-Gross estimates nearly 10,000 girls and young women have been shown STEM opportunities through the years

College of Basic and Applied Sciences Interim Dean Greg Van Patten said “the recognition … is a great honor. The award celebrates the work of numerous people on campus, including the director, Dr. (Judith) Iriarte-Gross, for the excellent work they have done in attracting and supporting women in STEM careers. I’m very proud of the WISTEM Center and the work they do.”

Lenore Pearlstein, the publication’s owner and publisher, said they “knew many STEM programs are not always recognized for their success, dedication and mentorship for underrepresented students.”

“We want to honor the schools and organizations that inspire and encourage young people who may currently be in or are interested in a future career in STEM,” Pearlstein added. “We are proud to honor these programs as role models to other institutions of higher education and beyond.”

For more information about the 2021 awards, visit www.insightintodiversity.com. 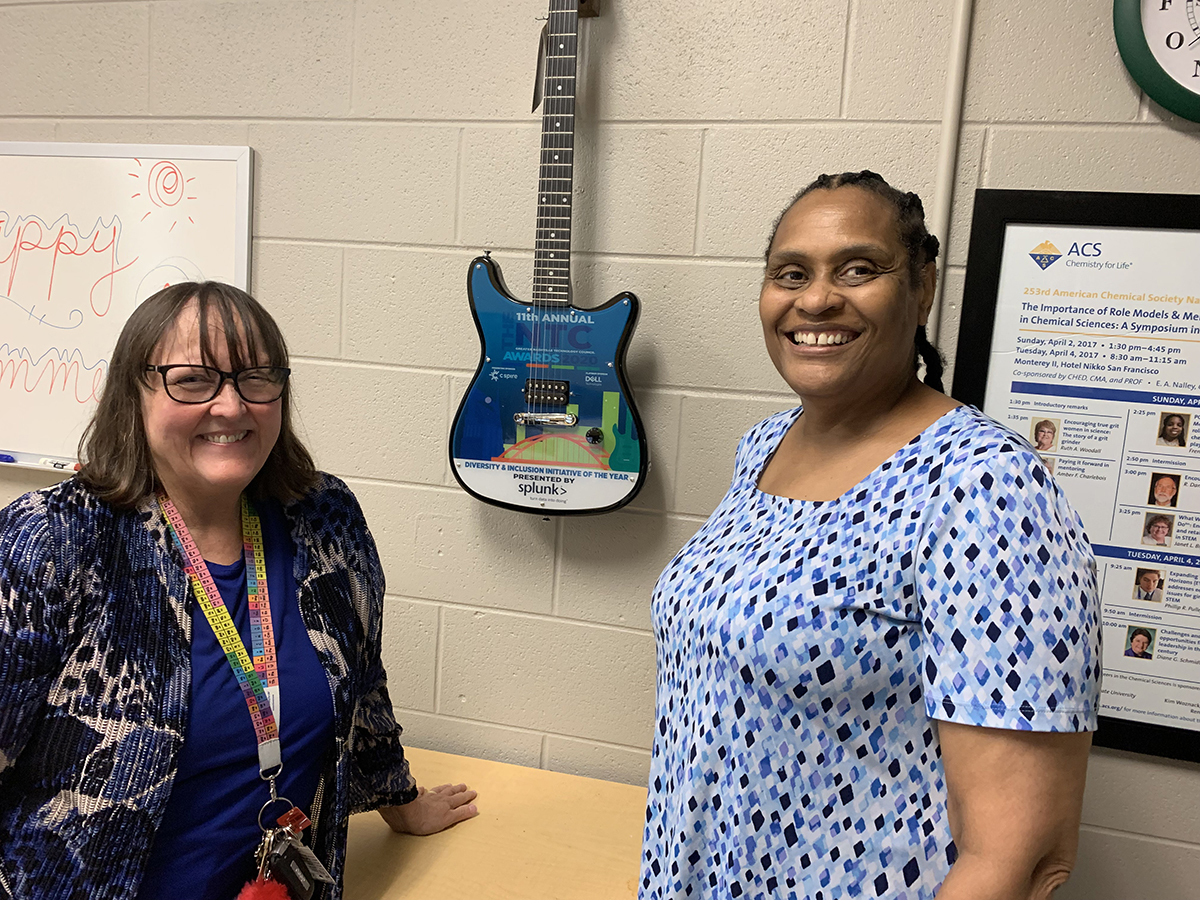 MTSU’s WISTEM Center has received the 2021 Inspiring Programs in STEM Award from INSIGHT Into Diversity magazine, which recognized nearly 80 programs nationwide. Shown with another center award, a prized guitar for being the Diversity & Inclusion Initiative of the Year during the 11th annual Nashville Technology Council Awards in 2020, are center Director Judith Iriarte-Gross, left, and Barbara Turnage, associate dean for the College of Behavioral and Health Sciences, who nominated the center for the INSIGHT award. (MTSU photo by Randy Weiler)