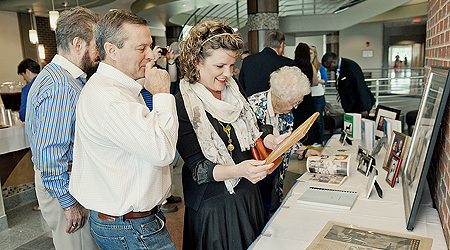 Rick Womack, left, and Christy Parsons look over materials from the Womack family following the dedication of the Womack Educational Leadership Department in MTSU's College of Education April 14. (MTSU photos by Andy Heidt)

The family’s involvement with MTSU began when it was still known as “Middle Tennessee Normal School.” On April 14, the University formally dedicated the Womack Family Department of Educational Leadership to honor their multi-generational years of support and service to MTSU and the state of Tennessee.

“It’s easy, when you’re in a family with this kind of lineage, to do what we’ve been able to do,” explained former state Sen. Andy Womack of Murfreesboro, after enumerating the family members who’ve attended MTSU since the eldest, his uncle Price Womack, graduated in 1928.

“We had our role models right there. Our mother (the late Elizabeth Clements Womack, also an MTSU alumna) raised us, and our father matured us. They gave us a sense of how important family is.”

Dr. Bob Womack, who graduated from MTSU in 1948 and taught teachers there from 1953 until shortly before his death in 2010, insisted that any honors include the whole clan, his eldest son added.

Noting that his grandparents, David Andrew and Georgia Price Womack, “took advantage of higher education themselves at a time when most people weren’t able to,” the former legislator enumerated the accomplishments of his aunts and uncles through their MTSU connections, becoming doctors, teachers, farmers and public servants as well as trailblazers in their fields. He said that tradition has continued with his own siblings and into the next generations.

Both Lynn Womack and Lara Womack Daniel are teachers (Lara in MTSU’s College of Business), and Rick Womack has continued the family legacy as a successful breeder and trainer of Tennessee Walking Horses. Andy Womack’s state Senate tenure was marked by his sponsorship and successful passage of the Education Improvement Act of 1992, which rewrote all the K-12 statues for Tennessee’s public schools.

In addition to encouraging public service for his family and his students, Dr. Bob Womack was determined to make his students think for themselves, several speakers noted.

“Dr. Womack was one of my professors when I was at MTSU,” said Dr. Lana Seivers, dean of MTSU’s College of Education and a former state commissioner of education. “At first, he scared me to death. His class was the first time I’d ever been asked to think rather than give back rote answers.

Alumnus and former state Sen. Andy Womack talks about his family's history with MTSU during the dedication of the Womack Educational Leadership Department.

“By the end of that class, the only thing I was scared of was not living up to Dr. Womack’s expectations.”

Womack’s expectations also included helping future students become the top-notch teachers MTSU has produced since its founding in 1911. His family established an endowment fund that ultimately will provide more than a half-million dollars in faculty and scholarship support for MTSU’s education program.

“The best part is that the story continues to be written every day in the Womack Department of Educational Leadership,” said MTSU President Sidney A. McPhee.

“At the beginning of our birthday weekend last fall (Sept. 10), we celebrated the opening of this beautiful building,” McPhee noted. “It’s very appropriate that we are winding down a celebration, 100 years after starting as a ‘normal school’ for teaching, to be here today.

“This demonstrates how we’ve never forgotten our roots and our commitment to excellence. … We celebrate the Womack family and their significant, outstanding and lasting contributions to MTSU over the decades.”