Dr. Jennifer Woodard, assistant dean of the MTSU College of Media and Entertainment, used those words to describe her life and career as she accepted the 2021 John Pleas Faculty Award at a Feb. 24 ceremony that was livestreamed to comply with COVID-19 protocols. 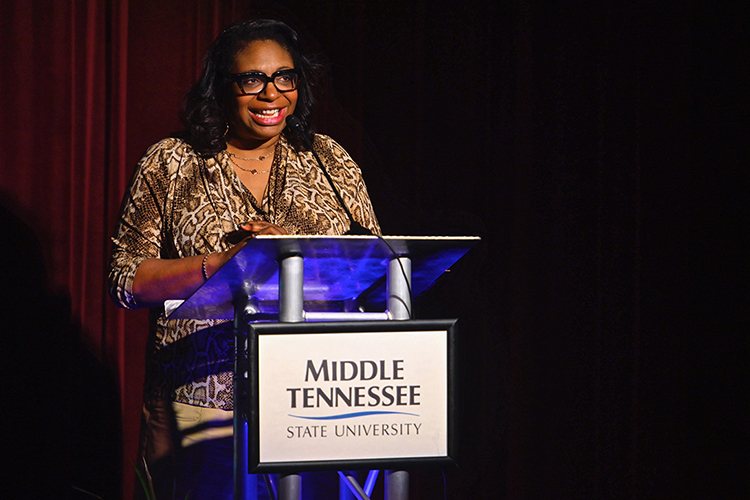 The award, named for psychology professor emeritus and 1999 Outstanding Teaching Award winner John Pleas, is presented annually during Black History Month to a Black faculty member who has demonstrated excellence in teaching, research and service.

Woodard is the 25th recipient since the award’s inception in 1997.

“I am honored, humbled and so filled with gratitude to be named among such an esteemed group, so many of whom have mentored, encouraged, sponsored and aided me,” Woodard said in her acceptance speech from Keathley University Center Theater in front of a small group of masked and socially distanced family members and supporters.

Woodard, one of Pleas’ former students, said Pleas was the first Black teacher she had ever had. She said he was so influential to her that she almost changed her major.

Although unable to attend, Pleas sent a congratulatory note, which was read by 2020 award winner Leah Lyons, interim dean of the College of Liberal Arts and master of ceremonies for the event.

“As a freshman student in my Introduction to Psychology course, your enthusiasm was noticeable and I was under the impression you might major in psychology,” Pleas wrote. “I soon realized that after a number of casual conversations that you would be successful in whatever career you pursued.” 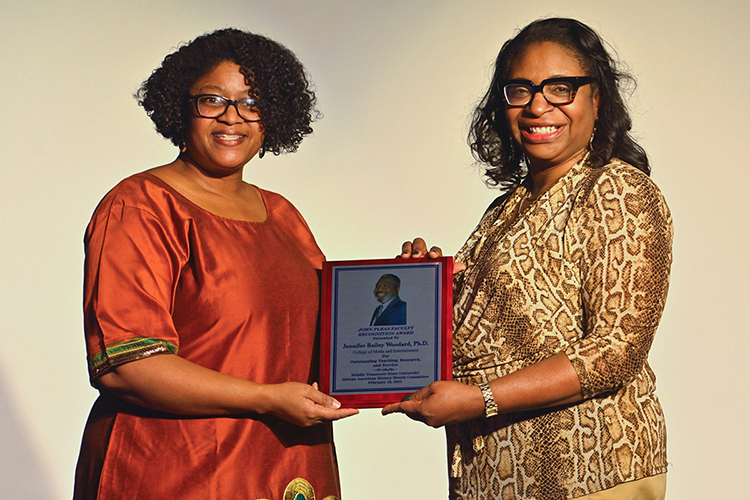 She also is faculty adviser to the university chapter of the National Association of Black Journalists.

In her promotion of diversity in higher education, Woodard said, “We cannot talk about representation and diversity without making it concrete in the form of people.”

Woodard attributed her perseverance to her parents and her siblings, all of whom performed field work on a farm in Watertown, Tennessee, during her youth.

“That farm and my father also taught me that I can do anything that men could,” Woodard said. “It didn’t matter to my parents that we were girls. We all did our share of the work that needed to be done. To my parents, we were smart, we were capable. Therefore, we were expected to choose a path and be successful.”

“She represents the best of the best at our university and is part of the foundation that has made MTSU one of the best in the country,” McPhee said.

Calling her a “most worthy recipient,” Byrnes said, “like me, she was an undergraduate here and then went on to continue her education elsewhere and has been just a fine faculty member and now administrator at MTSU.”

Media and Entertainment Dean Beverly Keel and DeAmbrea West, president of the MTSU chapter of the National Association of Black Journalists, added their compliments in person, along with NABJ secretary Nayasha Byrd.

“With Jennifer, it’s never about her,” Keel said. “She always works in the background and never seeks the spotlight. She’s always about the work and about the people around her.”

“Although this award is a small portion among the endless flowers that you deserve, I … am very proud of you and encourage you to keep doing great things because the impact you leave is necessary and appreciated,” West said.

Woodard teaches classes on convergence, digital writing, podcasting, audio journalism, women in the media, and race, class and gender. Her emphasis on media literacy instructs students in how to judge the media they see and hear based on credible facts, a valuable skill in an age of growing disinformation.

With professor Ken Blake, Woodard is planning a “Come to Voice” project to expand data, media and social media skills to economically disadvantaged students in middle schools and high schools.

For more information about the John Pleas Faculty Award and to see a list of previous recipients, go to www.mtsu.edu/aahm/john-pleas-award.php. 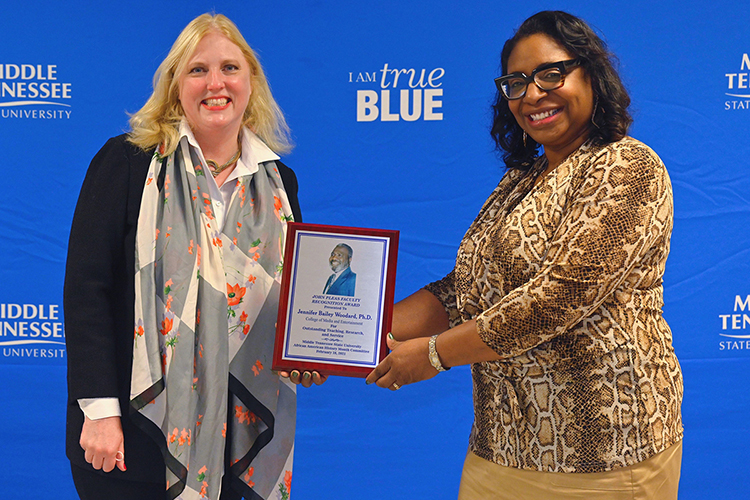