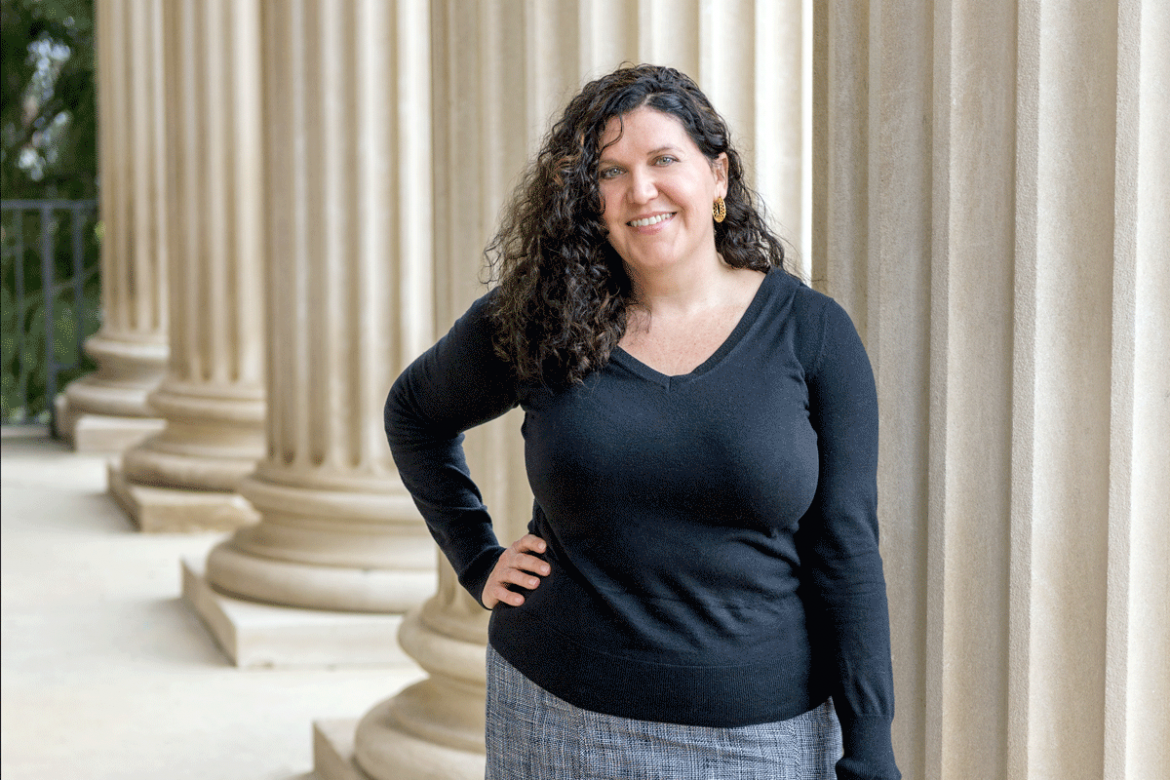 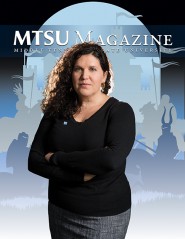 When the fifth season of HBO’s Game of Thrones premiered in April 2015, the show based on the best-selling medieval fantasy books by George R.R. Martin drew about eight million viewers live. Days to follow would yield online, on-demand, and DVR viewings that brought the audience total to 18 million viewers, according to HBO, which later declared the show the most-watched in HBO history.

Set in a brutish yet simpler pre-industrial world where men dominate women and disputes are settled with the sword, Game of Thrones and its soaring popularity speak to a modern obsession with the Middle Ages. It also provides a hearty new platform for researchers like MTSU English professor Amy Kaufman, who studies medievalism, a mythologized version of the Middle Ages.

“Pardon the pun, but medievalism is really experiencing a renaissance these days,” Kaufman said.

Examples of medievalism permeate American pop culture in the 21st century, whether it’s Game of Thrones or Vikings (another popular television series, which airs on the History Channel); the Warner Brothers multi-film version of the King Arthur legend scheduled to hit theaters in 2016; or video games with names like World of Warcraft, the Elder Scrolls series, and Dragon Age (or Game of War … think Kate Upton).

Though Kaufman is trained in what she calls “traditional medieval studies,” meaning she studied—and still does—works that came out of the Middle Ages such as Geoffrey Chaucer’s Canterbury Tales (14th century) and Thomas Malory’s rendition of the Arthurian legend (15th century), she also looks at the entertainment Americans consume and the ideas that entertainment has about the time period in which she specializes.

Typically, there’s a disconnect between those “worlds.” Kaufman seeks to determine what that disconnect is and why it happens. Essentially, she asks, “Why does the Middle Ages look so different in popular culture than it does when we actually encounter it in literature?”

What Kaufman and others in her field have determined is that medievalism seems to gain traction in popular culture when audiences feel insecure, unstable, and threatened by rapid change. That, Kaufman explains, is clearly applicable for today’s society, but it was also the case in the nineteenth century, a period that saw colonies wanting liberation, slavery coming to an end, agitation for women’s suffrage, industrialization, and new ideas by Darwin and Freud. Thus, the medieval past, a time before such turmoil, looked very attractive to those living in the eighteen hundreds.

“They imagined it as a time and place where men were men, women were women, everyone was the same race and practiced the same faith, and no one was corrupted by technology, sexuality or democracy,” Kaufman said.

More importantly, Kaufman adds, writers, artists, and even historians created versions of medieval stories that stabilized gender, race, and religion, and in turn perfected this simplistic notion of the medieval period that we have today.

“What people don’t realize is that a whole lot of the ‘neomedieval’ material we consume in popular culture is filtered through late nineteenth- and early twentieth-century medievalism, rather than actual medieval sources,” Kaufman said, citing the fact that the popular image of a Viking with a horned helmet, for example, is a construct conceived for the four operas that make up nineteenth-century German composer Richard Wagner’s Ring Cycle.

“Our sources are less often medieval literature or history than they are, in many ways, cloudy nostalgia and imaginative propaganda.”

Take, for example, Game of Thrones.

“The series sells the typical fantasy of medieval life as nasty, brutish and short, but my concern with it, and my focus in studying it, has been the way that it normalizes sexual violence,” Kaufman said.

The excessive violence associated with the show and the original book series has drawn a great deal of attention and criticism. According to Kaufman, what’s worthy of noticing is the way the Middle Ages is mistakenly used to justify that violence. As she points out, Martin, in commenting about the amount of rape in his novels, once said, “Well, I’m not writing about contemporary sex. It’s medieval.”

In reality, however, it’s not. Rape, Kaufman confirms, was a serious crime in the Middle Ages, and the laws and punishments for the crime varied from century to century and nation to nation. So, although the high level of sexual violence in Game of Thrones is supposed to make its world “authentic, gritty and real,” it’s actually more modern than medieval in terms of how frequent rape is in contemporary entertainment culture and in the lives of people in the United States and globally.

Kaufman said the danger is that audiences watch “rape victims become disposable tropes in the service of ‘history’ and become complacent about sexual violence, either with false confidence that everything has improved since the ‘dark ages,’ or with resignation about the inevitability of violence against women in any time period.

“It lends horrific acts of violence and oppression the validating weight of history,” Kaufman said. “Ultimately, the kind of reductionist thinking we use when we imagine our medieval past is toxic to our sense of human identity. It limits what we think we’re capable of changing and who we are capable of being.”

In general, today’s examples of medievalism diminish the role of women, playing into the idea that the Middle Ages represent a more authentic manhood. Kaufman admits that when she began to study medieval literature, she expected to see the absence or oppression of women, as well as an unenlightened understanding of gender and sexism. However, what she found was quite the opposite. Examples of women in literature throughout the Middle Ages include heroic women with supernatural strength, sorceresses who both tormented and rescued men with magic, women who dressed as knights and won tournaments, and highly educated women who wrote and argued on their own behalf, often from positions within the church.

“I would never argue that things were perfect for women in the Middle Ages—they certainly weren’t—but medieval women were neither silent nor invisible,” Kaufman said. “They fought back, and many men supported them.”

The imagined, mythological version of medievalism in which women are submissive, however, has been utilized not only in entertainment media today, but in religious and political propaganda as well. Kaufman’s research also examines how extreme religious movements promise a return to an idealized past. Medievalism, Kaufman said, has been used in widely divergent religious movements ranging from the “masculine church” and Biblical Patriarchy movements throughout the last 15 years to, more recently, the recruitment propaganda of the Islamic State (ISIS).

“ISIS is basically selling recruits the opportunity to be the hero in a live-action, medieval-themed video game,” Kaufman said.

It’s all fascinating, book-worthy stuff. In fact, Kaufman is struggling with whether her research lends itself to one book or two: one on medievalism and pop culture, and another on medievalism and religious extremism. One thing is certain—she won’t be lacking material. As she puts it, for those who study medievalism, the world today offers “an embarrassment of riches.” 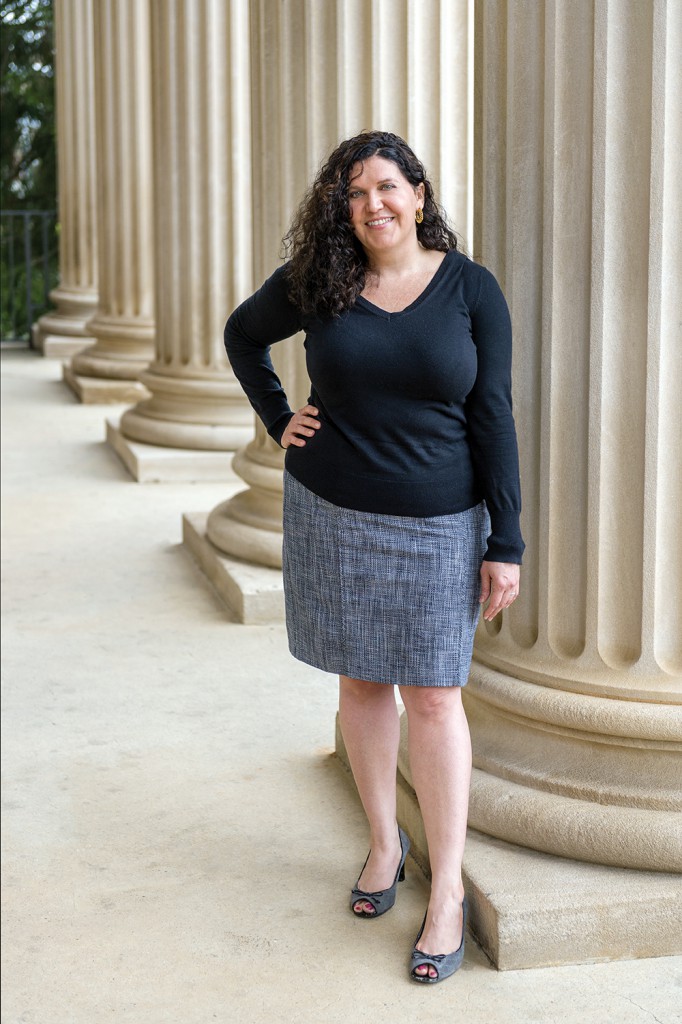 IN HER OWN WORDS

Talk about your work in women’s shelters and rape crisis centers. How, if at all, does it relate to your studies today?

I started volunteering with a domestic violence and rape crisis center in Tallahassee, Fla., while I was working on my undergraduate degree at Florida State. I worked with the children who stayed in the shelter first, then switched to the Injunction Assistance Office in the courthouse. I was drawn to that work again during my Ph.D. and answered hotline calls for an organization in Massachusetts. The work was heartbreaking and incredibly frustrating, and early on I was passionate not only about working to stop this kind of violence, but also figuring out why it happened so frequently and with so much tacit acceptance. I guess the scholar in me wanted to figure out the origins of the problem.

At the same time, my Medieval Studies education was dispelling myths about women’s absence from literature and history, providing me with powerful alternate narratives that I wanted to share. When we believe that gender and its hierarchies have been the same way throughout all of history, we accept sexual violence as inevitable. We surrender to it, and we lose our will to fight back. And that’s not just dangerous for women; it also affects the treatment of men who have been sexually assaulted. If violence against women is inevitable because they are women, violence against men becomes impossible to believe. This makes it much harder for male survivors to seek help.

You had planned to go to law school and practice family law. What changed?

I took a year between my B.A. and what would have been a law degree to work and save up money. And I worked two jobs at that point, both of which had me working with lawyers. And they were miserable. Even those who had gotten into the field with a degree of idealism found that they weren’t able to help people, that their lives were more about filling out paperwork and bringing in money than they expected.

At the same time, I learned that there was such a thing as graduate school. This was right before I graduated from Florida State. It may sound strange that I could go through four years of a B.A. program and remain totally ignorant of how a person becomes a professor, but unlike a lot of people who pursue this career, I didn’t come from an academic family. No one in my social circle was going to graduate school; a lot of my friends never even went to college. All I knew was that I loved to write, I loved literature, and I loved learning about history, and suddenly there was this possibility in front of me to do what I really loved doing on a daily basis.

What impact did academia and the professors who populate it have
on your life?

There were some very tough points in my life where teachers—and eventually professors—really saved me. They helped me not just by being compassionate, but also by feeding my mind and wanting to see me grow and succeed. I feel like I have come really far from where I started out in life, and I owe nearly all of that to my teachers and professors. There is a lot of power in teaching, power to reach people, expand their possibilities, and open up their worlds.