MTSU experts spearhead the effort to bring the remains of Mexican-American War soldiers with Volunteer State ties back to the U.S

With dignified precision befitting the honors due to fallen American soldiers, as many as 13 skeletal remains unearthed from what was a Mexican battlefield 170 years ago were welcomed home to the U.S. at Dover Air Force Base in Delaware on Sept. 28. 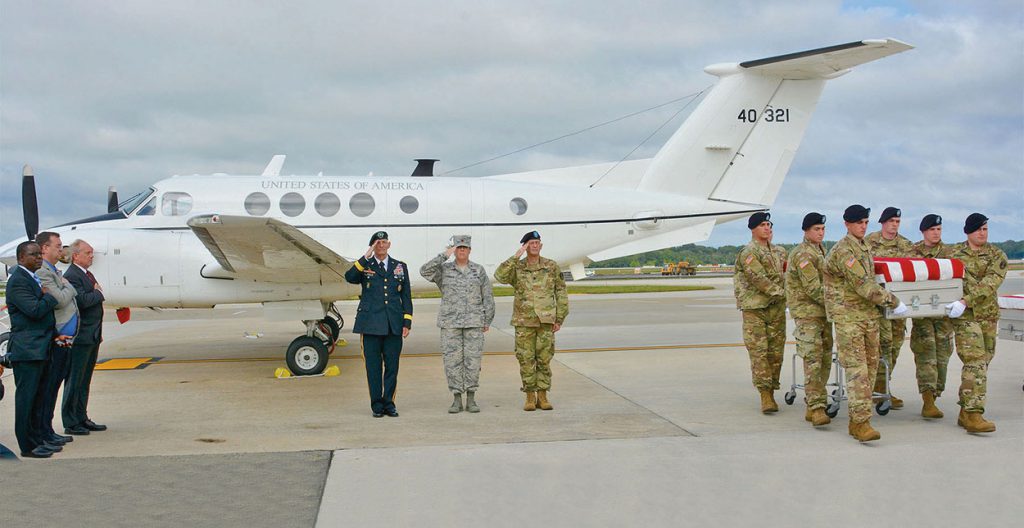 Members of the U.S. military conduct “the solemn movement” of one of two flag-draped transfer cases containing skeletal remains unearthed from what was a Mexican War battlefield. The remains, believed to contain members of the Tennessee militia who died in the Battle for Monterrey in 1848, were welcomed home to Dover Air Force Base in Delaware Wednesday, Sept. 28. MTSU officials attending the event include, center left saluting, retired Lt. Gen. Keith M. Huber, senior adviser for veterans and leadership initiatives, and at far left, MTSU President Sidney A. McPhee and professor Derek Frisby.

The solemn movement of the two flag-draped transfer cases, believed to contain members of the Tennessee militia who died in the Battle for Monterrey in 1846, was the culmination of more than five years of diplomatic negotiation, sparked by the urging of an MTSU anthropology professor. That professor, Hugh Berryman, director of MTSU’s Forensic Institute for Research and Education, stood on the flight line at the home to the Air Force Mortuary Affairs Operations and the Armed Forces Medical Examiner System to witness the transfer of the remains from the Army C-12 aircraft and to pay his respects. 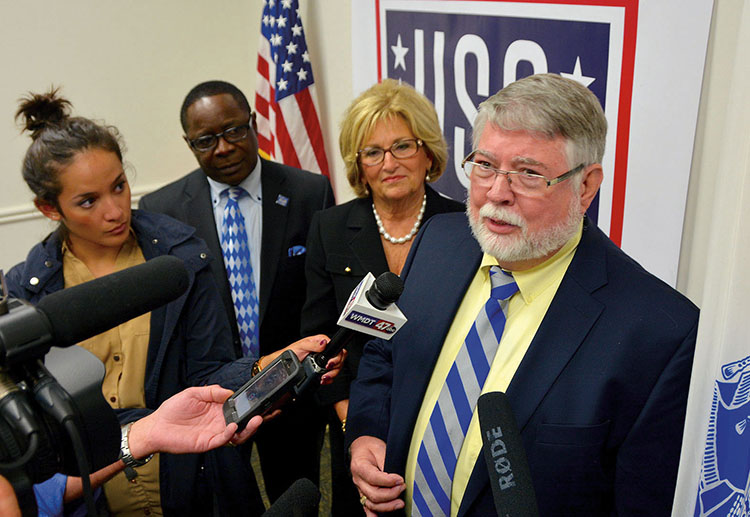 Middle Tennessee State University forensics professor Hugh Berryman speaks to media Wednesday, Sept. 28, during a press conference at Dover Air Force Base in Delaware about the return of soldier remains from the Mexican-American War. Standing behind him are U.S. Rep. Diane Black and MTSU President Sidney A. McPhee.

For Berryman, his work has just begun. He is now leading a team of MTSU professors, including Shannon Hodge, a bio-archaeologist with a specialty in paleopathology, and Derek Frisby, a military historian in the Global Studies Department, along with experts from other academic institutions, who have volunteered to assist the Armed Forces Medical Examiner System in the historical, bio-archaeological, and forensic analysis of the remains.

“The skeleton is excellent at recording its own history,” Berryman said. There’s a remote possibility, he added, that they may even be able to identify the remains.

From U.S. Army press releases to coverage by news outlets around the country, the story made national headlines.

Berryman’s involvement with the repatriation of the remains dates back to 2013 and began through his work as a consultant to the military’s forensic efforts. Intrigued by the potential tie to Tennessee, Berryman mounted a concerted effort to have the remains brought to the U.S.

The project earned a $55,000 grant from the Tennessee Wars Commission and picked up support from members of the state’s congressional delegation.

“After five years of ongoing negotiations with the Mexican government, we have finally returned our fallen Volunteer State heroes back to American soil,” said Black, whose
congressional office joined the push in 2011.

In 2013, U.S. Rep. Scott DesJarlais, R-South Pittsburg, asked the Department of Defense to secure the remains and for Tennesseans to be buried in the Gallatin City Cemetery, the site of a Mexican-American War memorial. Black and U.S. Sen. Lamar Alexander, R-Tennessee, also signed the letter. U.S. Rep. Jim Cooper, D-Nashville, and U.S. Sen. Bob Corker, R-Tennessee, chairman of the Senate Foreign Relations Committee, joined the effort as well. 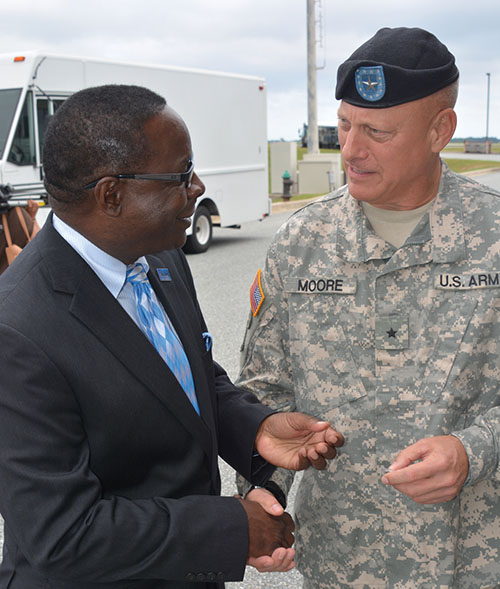 McPhee thanked the entire congressional delegation and praised Berryman and the other MTSU professors affiliated with the project.

“The work by Professor Berryman and his colleagues reflects the very best of our University’s commitment to innovation, dedication, and public service,” he said.

The Mexican-American War cemented Tennessee’s reputation as the “Volunteer State.” American soldiers, both regulars and volunteers, engaged in urban combat for the first time at Monterrey, and the lesson proved costly, particularly for many Tennesseans. Due to the logistical difficulties in transporting the dead, many of those killed were likely buried near the Tannery Fort site.

Over the next 150 years, Monterrey expanded rapidly around and over the battlefield. In 1996, construction of an apartment/parking complex revealed human remains believed to be those of Americans killed during the Battle of Monterrey. Historical evidence strongly indicates that these burials are likely those of Tennesseans or Mississippians who fell taking Tannery Fort. MTSU