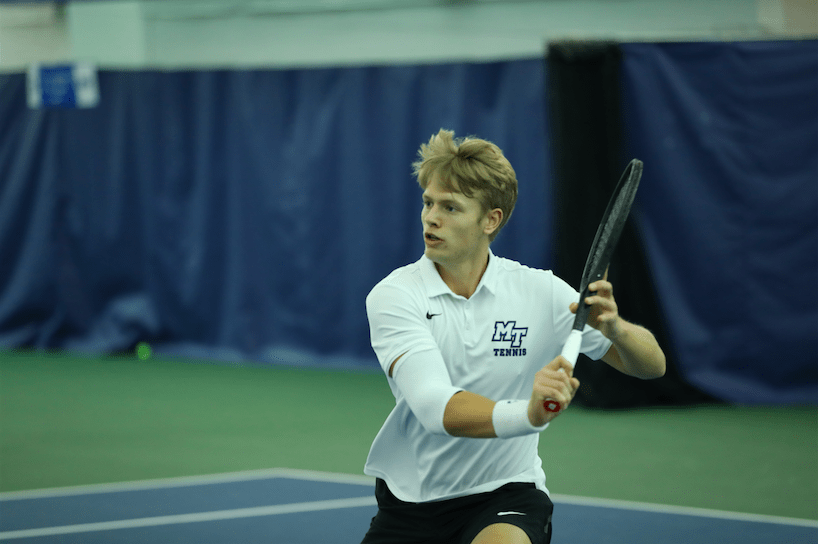 It’s 6.45 am when my alarm goes off, still half asleep I slowly realize why this awful noise is keeping me away from my dreams and bringing me back to the world. It’s game-day!

I have 20 minutes to get ready before we get picked up to go to breakfast so I quickly jump in the shower. After getting ready, packing my bag and eating a quick snack, my teammates and I are off to Panera. We don’t usually get breakfast as a team on match days but our coach wanted to make sure we were all awake to take on Wisconsin.

After our breakfast, we start our warm up at 9 and go through all of our normal routines. You can feel the excitement though; every guy is already locked in trying to get ready for this match. We are supporting each

other with “Let’s go blue” and “Here we go raiders” while we are going through our doubles practice. ‘Ten minutes to match time”, Coach Jimmy says, which means it’s about time to huddle up and go over some last minute strategies before we listen to the national anthem. While we line up looking at the flag, I notice how there are more and more people walking in. I think by myself how cool it is that we already have a great crowd at 10 am on a Sunday morning. Time for doubles!

Only for the second time this season we lose the doubles and go into singles 1-0 down. It was a good fight, a competitive doubles point but unfortunately, we couldn’t get it to go our way. Coaches Jimmy, Seb, and John call us together and tell us not to worry about being down going into singles, they tell us to compete our hearts out as a team and they really want us to battle as a unit. It is important to know that Wisconsin is a very loud and rowdy team, that’s how they put a lot of intensity in their matches and it also gives them the strength to shut teams down. We don’t want that to happen to us obviously! After the pep talk we are ready to get these guys in singles, we believe! Our line up is Gonzalo playing 1, I’m on court 2, Miguel 3, Chris on 4, Gian 5 and Luis is playing 6.

Only for the second time this season we lose the doubles and go into singles 1-0 down. It was a good fight, a competitive doubles point but unfortunately, we couldn’t get it to go our way. Coaches Jimmy, Seb, and John call us together and tell us not to worry about being down going into singles, they tell us t

As I’m walking to court number 2 I tell myself that I need to get going right from the start, I can’t get down early because that will only give my opponent more momentum and confidence than he already has after the doubles. Our chair umpire gets my opponent and me together at the net and we go over the rules as we do the coin toss to decide who gets to serve first. He wins the toss and decides he wants to start receiving, which means I get to start serving. I grab my towel and sprint to the baseline while getting fired up. I thankfully hold serve after saving three break points, but I know right away that this is not going to be an easy match. I was right, a few games later I am 5-4 down, he is serving for the first set and I have been struggling to create breakpoints so far. I look up to our scoreboard and see that Luis has come back from being 4-0 down and won the first set 6-4, Chris won his first set 6-3 and Gian won 6-1. Gonzalo is tied at 5-all and Miguel lost his first set 6-4, still looking at the scores I think how the end result of this match might come down to my court. As I get up from the bench I know that it is time to make something happen, it is time to break back! I hear Jan yelling at me from the stands, “Break time Tom Mooooonen”. He knows just like me how important this match might be for us.

A good ten minutes later I am sitting on my bench again, the crowd just went crazy after I pulled out the first set in a tiebreak. So not only did I break back when he was serving for the set at 4-5, I won the tiebreak after we got to 6-all. While calming down after claiming the set, Coach Jimmy tells me to continue to do the same thing in the second set. “Hopefully we can get a good start and put the pressure on right away.” I did not, unfortunately. After not converting on 2 breakpoints on my opponent’s serve in the first game I lost my serve right away and ended up losing the second set 6-1. At this point, we have lost on court 3 but won on court 4, 5, and 6. Gonzalo is still battling but he is down a set and a break, so I have kind of figured out by now that my match is going to decide whether or not we win or lose against Wisconsin.

It’s 1-all in the third set and I am the last match on, the overall score is 3-3 and all my teammates are cheering me on from the court right next to me. Everyone in the crowd is watching my match, and they are so loud! I really think this was the most intensity and energy we have ever had in the Adams Tennis Complex. At least the most since I have been here at MTSU. I’m so pumped up that I almost struggle to focus on my game, thankfully I do a good enough job to hold and my team and the crowd go wild with every point I win, every point we win.

Two games later I get broken, after a really poor service game wherein I just made too many unforced errors. I know that because of the way my opponent has been serving I have an extremely tough task ahead of me, but I still have this incredible crowd behind me. I hold comfortably for the next few service games but unfortunately so does he, I am running out of time.

As I am sitting on the bench during the 4-5 changeover my coach is talking to me. We both know that this is going to be our last chance to stay in the match, we need to break here because otherwise, it’s all over. We decide on a strategy, coach Jimmy wants me to make the guy play on first serves, he needs me to do whatever I can to get the first serve returns back in play. On second serves, however, he wants me to be aggressive, he wants me to return from inside the baseline and take the ball early. By doing this I will take time away from my opponent and deliver the first blow in the rally. As I stand up and run to my side of the court the cheers are unbelievably loud, everyone knows what the next game is going to bring. My teammates are chanting, the crowd is clapping, everybody is screaming, the atmosphere is amazing. After a couple of tough points and maybe a little bit of luck I manage to break back and stay in the match. The whole building literally went crazy; I don’t think I’ve ever been this fired up in my entire life either. What a feeling. I regroup though and hold serve to love, now I’m 6-5 up and things are looking a lot brighter than they did a few minutes ago.

On the changeover, coach gives me the same pointers again, make him play as much as possible and be aggressive where I can. While I get up and run to my side of the court to get ready to return the crowd fires me up even more. I know it’s time to break, to get this match over with and bring my team the W. I manage to win the first three points of the game, which gives me 4 match points, 4 chances to win the match! I can feel the tension throughout my body, as I am getting ready to return. We play the first match point… and I miss. Okay, no big deal on to the next one. We play the second match point… I miss again, only two more chances left and I’m feeling the nerves get the better of me. The third matchpoint now and I manage to win the point, I’m hustling and running for every ball, but then I slip and miss the ball in the net. Unbelievable. Now, down to the final match point, I either win the match or we go into a tiebreak. I’m getting ready to return. He’s getting ready to serve. Thankfully he misses his first serve, and I know that I’m going to get a chance now. Again I get into my ready position and he hits his second serve out wide, unexpected but I have plenty of time to get it back in play. I leave it short though, giving him a chance to step up… He goes for it. He misses long. I won, we won… we won! I fall on the ground as my team is sprinting towards me, and they all fall on top of me. I honestly have no idea what happened at that moment, but all I could think of was that we did it, we, the team, the coaches, the crowd, all of us together, we did it. What an effort. What a Sunday. And what a win! Unreal.

Moonen comes through in the third set and the #BlueRaiders take down Wisconsin! pic.twitter.com/36mN2hyxtm