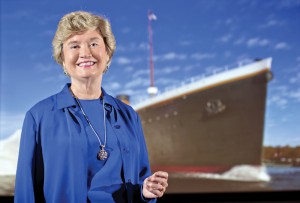 On April 15, 1912, the RMS Titanic, a passenger liner on its maiden voyage from England to New York City, struck an iceberg and sank. Titanic, the 1997 blockbuster movie version of what happened during the one and only voyage of the great ship, tells the story of Jack and Rose—star-crossed lovers played by young, vibrant, and good-looking Hollywood icons Leonardo DiCaprio and Kate Winslet—who spend four enchanted days together before Jack dies in the frigid ocean.

The real love story behind Jack and Rose’s fictional one may just be that of Isidor and Ida Straus, who were not so young, not so vibrant, and, possibly, not so good-looking. But their love was one built on more than 40 years of marriage and parenting together. The couple is depicted in the 1953 movie version of Titanic, and in the movie A Night to Remember. In James Cameron’s 1997 retelling, an elderly couple is shown briefly, lying together in bed, awaiting the crushing waters. While the scene may be intended as an allusion to the Strauses, their final moments together were quite different. But the story of Isidor and Ida Straus is a powerful one of love and honor, and definitely worth a book of its own. 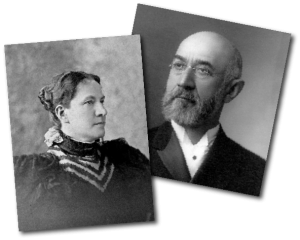 And now, that story is coming to life as a result of author and longtime MTSU professor June Hall McCash, who first came to MTSU in 1967 to teach French. In 1973, she became the founding director of the Honors Program (now Honors College), and in 1980, McCash was appointed chair of the Department of Foreign Languages and Literatures. She stepped down as chair in 1992 and retired in 2004. She remains closely connected to the University as professor emerita, and also through her service to MTSU’s Centennial Committee. Her newest book, A Titanic Love Story: Ida and Isidor Straus, is planned for publication in March 2012 by Mercer University Press. The timing is perfect.

This spring will mark the 100th anniversary of the sinking of Titanic.

Years before his fateful voyage, Isidor Straus, businessman and one-time congressman, went into business with the owners of the R. H. Macy store. Isidor and his brother Nathan eventually became sole owners of what would be the largest department store in New York City. By 1912, Isidor was turning over responsibility of the store to his three sons. He and Ida, 67 and 63 years old at the time, spent several months in Europe on vacation in 1912 and had their return voyage already booked on the Olympic, another White Star Line ship.

Because of a coal strike, the White Star Line couldn’t fuel both ships, and a return on the Olympic would be delayed. Fatefully, Isidor Straus booked their return to the United States on Titanic, and the couple, along with Ida’s new maid, Ellen Bird, and Isidor’s valet, John Farthing, boarded the ship and moved into their first-class accommodations. As Titanic was sinking, Ida boarded a lifeboat, but when she realized that her husband would not get on the boat while there were women and children still aboard the ship, she returned to the deck. Ida gave her maid her fur coat and her own seat in one of the lifeboats.

Like her movie counterpart 100 years later, Ida Straus did stay on the ship with the love of her life; unfortunately, neither survived. They were last seen embracing on the deck.  When Titanic went down, Ida was one of only four adult women from first class who died.

Have we learned everything there is to know about the voyage and sinking of the Titanic and all of the people whose lives it affected? We asked our resident expert, McCash.

“We will never know everything, but I believe that the documented sources concerning the sinking have been thoroughly examined and that we know, most probably, everything we will ever know. New documents surface from time to time, but they tend to shed more light on the lives of the victims than about their deaths. Information will continue to be gleaned from private papers, such as those I have used for this book. And that information transforms them into real, living persons we have not previously known.

“Ida and Isidor Straus are much more complete when one examines not just their deaths, but their lives—what they stood for, what they believed in, and what they valued. Those values impacted their deaths and why they chose to die together rather than live alone. The more I learned about the Strauses, the more I admired them. They are, I think, role models that could benefit the me-centered world in which we live today. At the end, neither thought of himself or herself, but of others. Honor and loyalty were values that defined them as human beings.”

[Editor’s Note: McCash was named Georgia Writer of the Year for her first novel, Almost to Eden. Her new novel, Plum Orchard, will be published in January 2012.]