A conversation with President Sidney A. McPhee 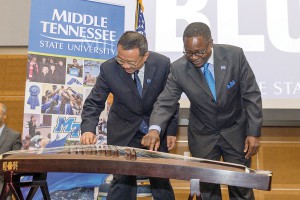 MTSU and China’s Hangzhou Normal University partnered in 2009 to establish MTSU’s Confucius Institute, which works to enhance understanding of Chinese language and culture. Talk about the newest development in that partnership.

President McPhee: MTSU is currently in the midst of the creation of a Chinese music and cultural center on University property. It’s the result of a $1 million grant provided by Hanban Confucius Institute in Beijing, an organization sponsored by China’s education ministry that oversees more than 440 institutes in 120 countries.

In collaboration with our sister university, Hangzhou, the new center will promote music as a vital element in education and understanding of Chinese people and culture. It will also become another component of our extremely successful international outreach, which has earned MTSU recognition as a leader in global studies.

At the ceremony to announce the grant and the creation of the center, Hangzhou President Du Wei, a violinist himself, quoted Confucius, who said, “Education primarily starts from poetry and ends with music.” I agree wholeheartedly.

This center has the potential to become the hub of local and regional outreach that will enhance the understanding, research, and teaching of Chinese language, culture, and music through public performances, events at schools, and a website with related resources.

What are the specifics of the project? 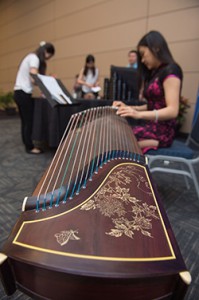 Sidney A. McPhee, MTSU President, university and Chinese dignitaries from Hangzhou University join for the announcement of the one million dollar Chinese Music Center to be added to the Confucius Institute and will be housed in the new Bell Street Center.

President McPhee: The 3,200-square-foot center, which is expected to open by fall 2016 or earlier, will be in the former Middle Tennessee Medical Center building on Bell Street. The center will showcase selected instruments from many of China’s 56 national ethnicities. For instance, at the ceremony announcing the new center, Hangzhou donated the new center’s first instrument, a guzheng, which dates back to ancient times and is a 21-stringed instrument that rests on legs much as a steel guitar does and is plucked by a seated musician.

MTSU has hired an ethnomusicologist, an educator who studies music in the context of its culture, to serve as the center’s director. Under the auspices of the College of Liberal Arts and the School of Music, the center’s leader will develop courses involving Chinese music. There will be active and visible research taking place at the center resulting in presentations and publications that will allow MTSU to develop a national and international reputation in this area.

Who else deserves credit for this exciting new project, which really constitutes another musical jewel in the Nashville area’s musical crown?

President McPhee: Contributions came from MTSU’s School of Music and its director Michael Parkinson, as well as the departments of Recording Industry and Electronic Media Communication. In addition, many of the underlying strategies used to develop this center were based on the activities and operational structures employed by our world-class Center for Popular Music, which is recognized as one of the finest repositories of American music and culture in existence.

President McPhee: This new center perfectly complements our existing
treasure trove of musical assets at MTSU. It broadens our musicology efforts into the realm of ethnomusicology and grows our research footprint to include multicultural musical and cultural studies. This will be a destination not only for scholars; it will be yet another attraction that reinforces the greater Nashville area’s standing as Music City, USA.

Dr. Du Wei has also already proposed the creation of a Chinese center of American studies on the campus of Hangzhou Normal University in China and is prepared to begin discussions immediately.