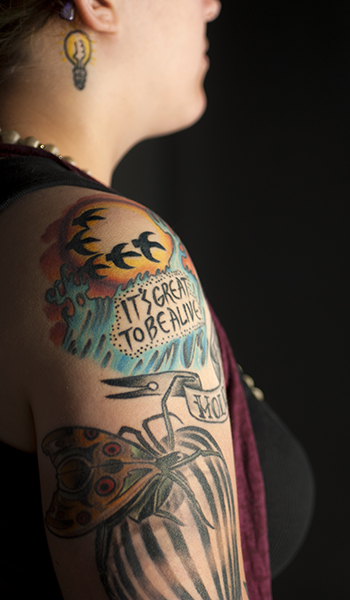 Tattoos have been around for tens of thousands of years, but they still can be an obstacle to entering the professional workforce

“Ink” seems to be everywhere. According to a recent NBC News/Wall Street Journal analysis, 21 percent of households included a member with at least one tattoo in 1999, but by 2014 that number had almost doubled to 40 percent.

Based on statistics from a recent Pew Research Center poll, in conjunction with MTSU enrollment statistics, an estimated four out of every 10 MTSU students likely have a tattoo. That’s close to 9,000 students.

When those students graduate, most will be interviewing for jobs—perhaps with readers of this magazine who own businesses. Will having a visible tattoo be a deterrent to their chances of landing work? According to a recent Salary.com survey (see sidebar), the answer is yes.

Around campus and within the broader MTSU community, several recent tattoo-related stories contribute to the discussion of tattoos and their cultural and professional implications. 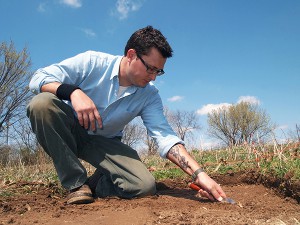 The study of the art and sociology of tattooing is alive and well at MTSU. A class named Anthropology of Tattooing uses the tools of anthropology, archaeology, and ethnography to explore tattoo traditions from dozens of cultures and subcultures across five continents, beginning about 100,000 years ago and continuing through the tattoo renaissance of the late 20th century. The course is taught by Dr. Aaron Deter-Wolf, an archaeologist of prehistory with the Tennessee Division of Archaeology and principal editor of and contributor to Drawing with Great Needles, the first book-length scholarly examination into the history and significance of Native American tattooing in the Eastern Woodlands and Great Plains. 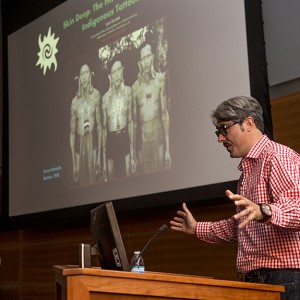 A recent lecture at MTSU by Lars Krutak, known as “the tattoo hunter” for his worldwide travel tracking down vanishing indigenous tattooing traditions, made its own kind of lasting impression on campus. His talk was part of the Anthropologica Lecture Series sponsored by the Department of Sociology and Anthropology (in cooperation with the MT Anthropology Society). Krutak discussed how and why tattoos were applied in Borneo and Indonesia, typically as rites of passage when reaching adulthood, for specific spiritual or therapeutic purposes, or as marks of achievement as a warrior. 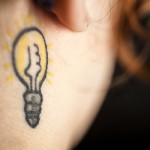 But what about in modern life? How far will that tattoo take you? That’s a question Department of Psychology professor Mark Frame and his students explored. Creating a fictional company and placing participants in the role of hiring manager, investigators presented candidates—some with visible tattoos and some without—who were equally qualified.

Survey results showed an overwhelming bias against hiring those with tattoos. Frame says that great care was taken to eliminate variables, and he even engaged a tattoo artist to come to his class to demonstrate tattooing (with markers rather than permanent ink). Frame presented some of his findings at a recent convention of the Association for Psychological Science in Washington, D.C., and is working with Industrial/Organizational (I/O) Psychology majors on further studies.

According to an Associated Press article published in Military Times, the Air Force banned tattoos covering more than a quarter of an exposed body part in 2011, the Marine Corps banned sleeve tattoos and those covering the leg below the knee in 2007, and the Navy banned forearm tattoos wider than a hand’s breadth in 2006.

According to various news reports, Thorogood, a sniper with 10 years of active duty already under his belt, and who has 11 tattoos, had hoped to join a U.S. Army special operations unit and become a helicopter pilot. New Army regulations in place at the time, though, barred promotions to warrant officer or commissioning as an officer for soldiers with tattoos below the knee or elbow. Thorogood’s case was eventually dismissed; the regulation didn’t affect him, because the tattoos were grandfathered in and didn’t play a role in his promotion attempt.

In April 2014, however, the Army made several appearance and tattoo policy changes. According to an Army Times article, the changes were based on how “society is changing its views of tattoos” and in support of how soldiers felt about the ban.