Activist who won free-speech b..

Former Vice President Al Gore’s passion for environmental issues rose to the fore at a tribute to his late father, Albert Gore Sr., before a capacity audience Monday, Sept. 16, at MTSU’s Tucker Theatre.

Gore, who received the Nobel Peace Prize in 2007, along with the Intergovernmental Panel on Climate Change, connected the worldwide climate crisis to Hurricane Dorian, at one point a Category 5 storm that devastated portions of MTSU President Sidney A. McPhee’s native country, the Bahamas. 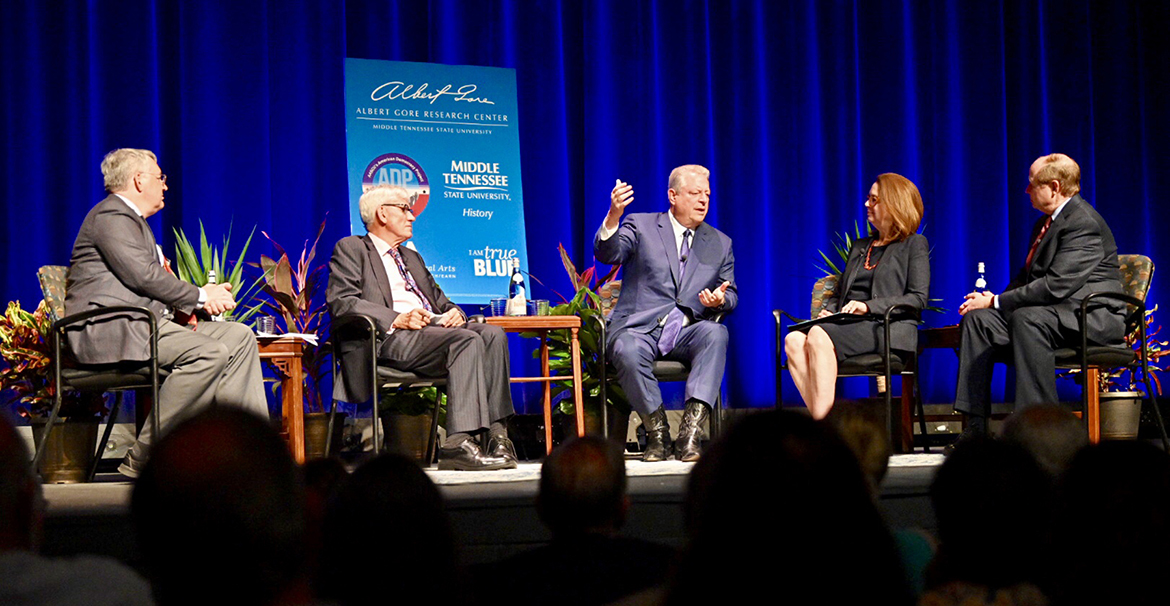 McPhee, whose 24-year-old grandniece perished in the storm, has accompanied two planeloads of relief supplies to the Bahamas following the hurricane, which claimed the lives of at least 50 people and left thousands homeless. Gore blamed the storm’s intensity on increasing temperatures resulting from the destruction of the ozone layer.

“Dr. McPhee’s recent loss and unbelievable tragedy in the northern Bahamas is linked to the fact that 93 percent of that heat energy goes into the oceans,” Gore said.

Rattling off statistics about the impact of climate change as well as noticeable upticks in massive wildfires, flooding and glacial melting, Gore emphatically pleaded his case for a greater awareness of the largely man-made forces that are wreaking havoc with climates around the world.

“Obviously, what’s wrong is we have utterly transformed the relationship between humanity and the surprisingly fragile ecosystem of our planet, and we’ve got to stop destroying it,” he said. 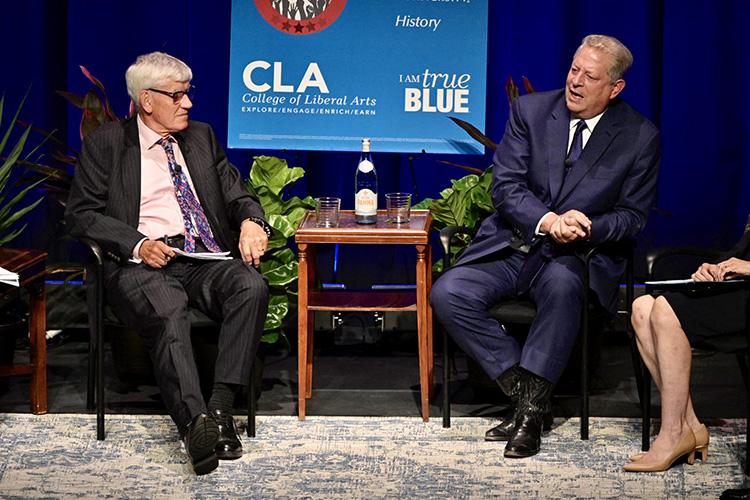 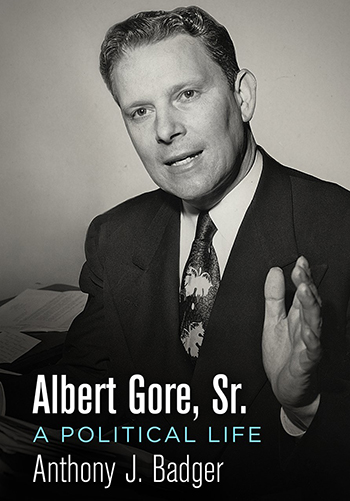 Badger, a professor of American history at Northumbria University at Newcastle upon Tyne in the United Kingdom, is a specialist in post-World War II Southern U.S. history. He began performing research for his book at MTSU’s Albert Gore Research Center, which houses the elder Gore’s papers, in 2001.

Observing that Gore Sr.’s career “spanned the creation of the modern South,” Badger said that the Carthage, Tennessee, native represented a “new generation of Southerners” that President Franklin D. Roosevelt hoped would embrace his New Deal economic plan to pull the country out of the Great Depression.

The senior Gore’s support was paramount in bringing electric power to the rural South through the Tennessee Valley Authority, providing atomic power for the national defense through the Oak Ridge National Laboratory and constructing a network of interstate highways through the Federal Highway Act of 1956.

Gore Sr. was one of only three Southern U.S. Senators to refuse to sign the Southern Manifesto, a 1956 document stating opposition to racial integration. Al Gore recalled how much his father hated racism, not only because of its inhumanity, but because it was the basis of a tactic to keep economic elites in positions of power. 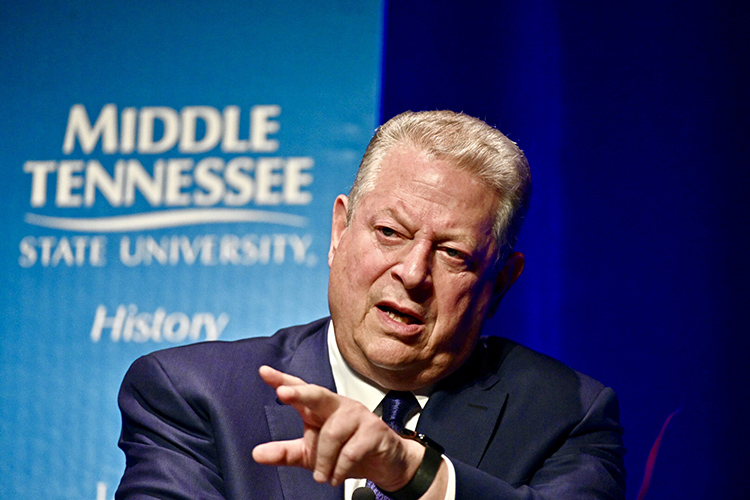 “That divide, enforced by racism and, of course, at times, terror, was a key political strategy in keeping political control in the hands of what he always referred to as ‘the special interests.’”

Al Gore, who served as vice president from 1993 to 2001, received the Nobel for “informing the world of the dangers posed by climate change.”

“Al joined our faculty in 2001, not long after I became president of this university, and we at MTSU are honored that his influential work on climate change was done while he taught and did research as a member of our community of scholars,” McPhee said in welcoming remarks.

Al Gore reflected on how his parents informed his perspective on the environment, from his father’s concerns about soil erosion to his mother’s insistence on reading Rachel Carson’s landmark indictment of pesticides, “Silent Spring,” to him and his sister at the dinner table.

“To me, it was kind of a hop, skip and a jump from soil erosion to the regional environmental crisis that Carson explained to the global issues that are so prominent today,” Al Gore said.

Earlier in the day, Gore viewed a collection of political memorabilia and an exhibit about Albert Gore Sr. at the Gore Center and a larger exhibit about his father at the James E. Walker Library.

The Gore Center has provided a complete, closed-captioned video of Badger’s talk, “Albert Gore Sr. and the Emergence of the Modern South,” followed by the panel discussion, below. The video is about 90 minutes long.

For more information about the Albert Gore Research Center, contact Kyriakoudes at 615-898-2633 or louis.kyriakoudes@mtsu.edu. 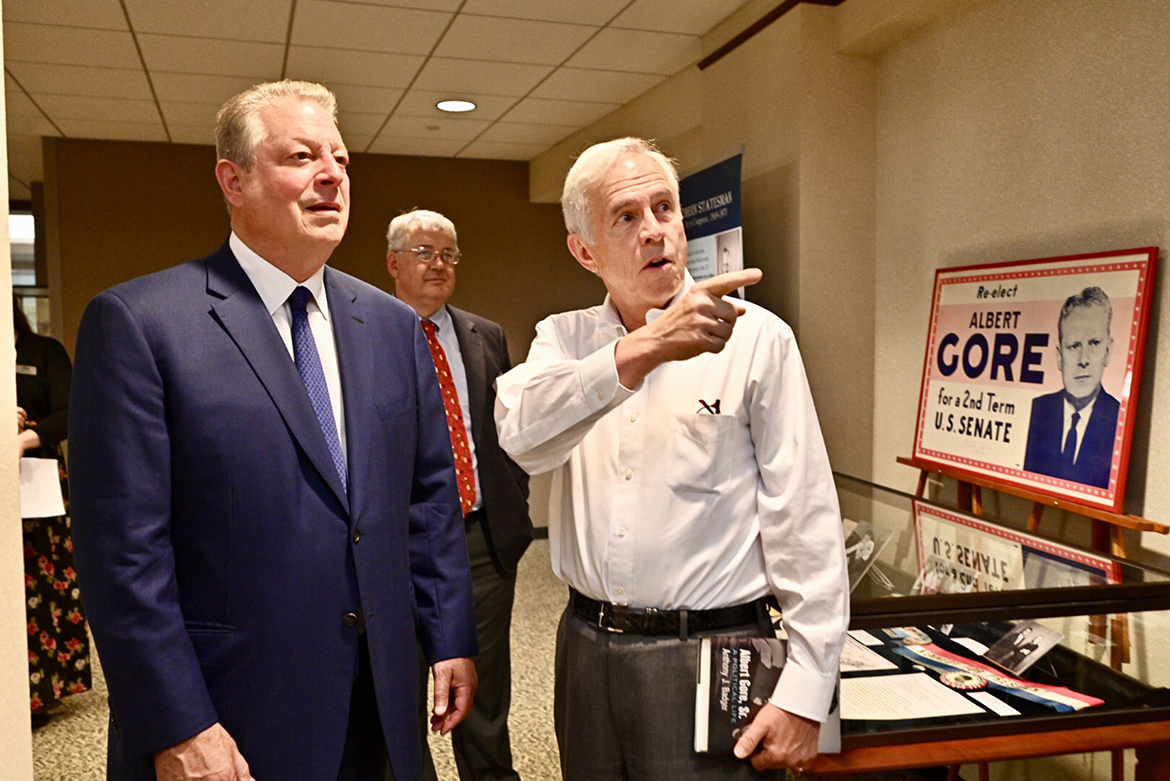 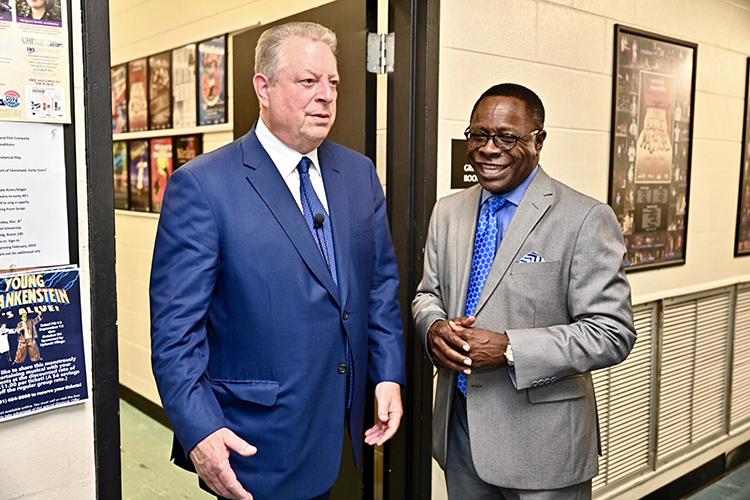