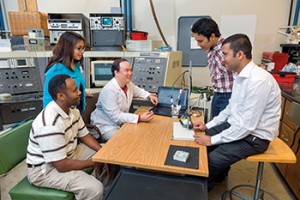 On the bottom floor of Wiser-Patten Science Hall, past a lecture hall and a few smaller classrooms and teachers’ offices,  one can find the home base of Dr. Charles C. Chusuei and his team of student researchers. At first glance, the lab is pretty much what one would expect. A number of small work stations, some whiteboards, and a desk or two populate the periphery of the room. (Stacked in one corner, there are a number of large, unopened boxes.) A bulky piece of equipment dominates the center. Most scientists (and many students in the field) would recognize the instrument as an X-ray photoelectron spectrometer, a machine that allows for nondestructive elemental analysis. It’s a vital tool in the associate professor of chemistry’s current line of research. Of course, give a layperson, someone who doesn’t know a spectrometer from a chromatograph, a few moments to look around, and you’ll probably hear the following question: “Is that a hand drill?”

It is (a Black and Decker, in fact). It’s also a makeshift stepper motor for a homemade ultra-high vacuum sample transfer system. With the assistance of Rick Taylor, lab director in the Department of Engineering Technology, and the machine shop in the Voorhees Engineering Technology Building, Chusuei used the drill, a gearbox, a threaded rod, and machined pieces of aluminum to build a device the components of which would normally cost about $1,000 to buy new. 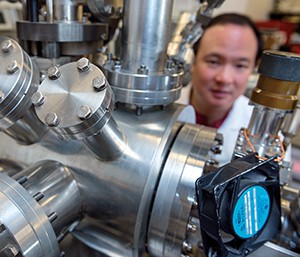 There are plenty of other examples of Chusuei’s combination of thrift and inventiveness—a fish tank pump substitutes for the Wiser-Patten building’s lack of dedicated pipes for chilled water. It’s one of many drawbacks to the 83-year-old building—those boxes in the corner are actually equipment with technical and safety specs that bar them from being installed in Wiser-Patten. In a field where research ambitions often far outstrip existing facility technology and available funding, it’s not uncommon to find professors who are equal part bargain hunters and MacGyver. Chusuei, who arrived at MTSU in 2010, can count on one of those variables changing soon—a $147 million, state-of-the-art science building is scheduled to open for instruction in 2015—but that doesn’t mean he’s just waiting around. Quite the opposite, Chusuei and his student researchers have been busy developing a technology that could transform patient care in emergency rooms and health centers throughout the world.

As a result, this cluttered room, with its combination of brand-new, unpacked equipment in waiting and cobbled-together scientific apparatuses in use—not to mention the man standing in the middle of it all—represents the exciting present and potential-filled future of science research at MTSU as surely as the new building being built a few hundred yards away.

Not So Common Sense 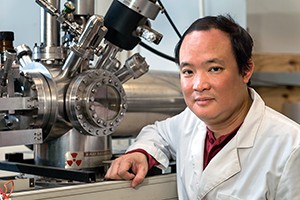 As with most scientific research, discoveries with big applications often boil down to thinking small. Really small. Yet it also involves the detection of something one can find a bottle of in almost every home—hydrogen peroxide. It turns out that bubbling stalwart of home-based health care is also a natural byproduct of the biochemistry of all living organisms. The ability to monitor hydrogen peroxide on a molecular level has a host of practical applications in fields as diverse as health care (early cancer detection) and food service (spoilage detection). As a result, researchers have developed a variety of nanotech-based sensors. For the most part, those technologies have used sensors dependent on carbon nanotubes (CNT) coated with oxides derived from precious metals—gold, palladium, ruthenium, etc. As the word “precious” suggests, it’s not cheap to use such metals. But just as with his lab’s ultra-high vacuum sample transfer system, Dr. Chusuei found that the expensive way to do things was hardly the only way. In an effort to establish a cheaper biosensing material, Chusuei turned to zinc. 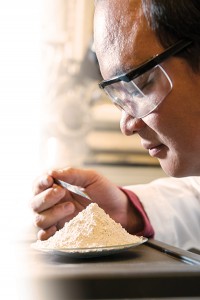 An earth-rich element, zinc is much more abundant and, therefore, cheaper, than the precious set. But in order to establish it as a viable substitute, Chusuei and his team first needed to control the shape of the ZnO compound itself. (The more complete the coverage by the ZnO of the CNT, the better the sensor.) “It was a lot like the fairy tale Goldilocks and the Three Bears,” Chusuei says. In the end, working the ZnO into its ideal shape required many things being “just right.” It required, among other things, finding just the right temperature (90 degrees Celsius) of the solution in which the suspended ZnO nanoparticles were formed and the pH (7.365) for maximum reactivity, as well as establishing just the right amount of time for sonication (the application of  sound energy to agitate the solution).

With the bulk of the research completed—and with the right balance struck—it’s actually a rather simple procedure to replicate, but as Chusuei’s patent application shows, it wasn’t an obvious one. The real-world potential of the research has Chusuei and his students excited. The cheaper the materials, the more widespread the possible application of the technology.

“If we can attach this biosensor in a portable electrochemical cell, then people can easily detect the presence of [certain compounds] in their body whenever and wherever they want,” says grad student Anup Deb, who learned of Dr. Chusuei’s research while an undergraduate at the University of Dhaka, in Bangladesh.

“What I’m doing now contributes to the effort to create a cancer-free community,” says Mulugeta Wayu, a Ph.D. candidate in the University’s Molecular Biosciences program who came to the United States after spending years as a research scientist in Ethiopia.

Cancer is not the only affliction potentially addressed by the research of Chusuei and his students nor is hydrogen peroxide the only substance detectable. Another vein of inquiry includes the detection of lactic acid, a marker for anaerobic respiration (the presence of which can indicate that a patient is not breathing well or getting enough oxygen). Such sensors could detect signs of physical distress that show up well “before changes in heart rate or blood pressure would be registered,” Chusuei points out.

Even with so much established, there remain plenty of practical questions and intriguing pathways for follow-up research. “Now it becomes a question of how low you can go,” Chusuei says. As with most things nanotech, the smaller one gets, the wider the applications. (There’s also the question of testing and gauging the toxicity of the resulting sensors.) The lab’s success with ZnO has also led to research with other non-precious-metal-based compounds. Anita Saha, a senior biochemistry major, is working with cerium oxide to detect acetaminophen.

In less than a year, Dr. Chusuei’s modest little laboratory will be housed in a shiny new science building. The low-energy electron diffractometer, liquid nitrogen generator, and quadrupole mass analyzer—to name a few of those brand-new pieces of equipment still in boxes—will have been unpacked and put to long-awaited use. It’s exciting to consider, and no doubt the state-of-the-art facility will make a host of scientific processes easier and new discoveries possible. Nonetheless, the most crucial ingredients to the University’s future success as a research institution are already in place in the form of Dr. Chusuei, his colleagues, and all the student researchers under their direction. Oh, and that hand drill masquerading as a stepper motor.

To see interviews with Dr. Chusuei and his research team: