ATLANTA, Ga., and CHATTANOOGA, Tenn. — Jacob Cruz has been into music “ever since he could crawl,” his father, Leonard Cruz, of Dacula, Georgia, said.

Jacob wants to transfer in January 2020 to the Murfreesboro, Tennessee, university to study audio production. 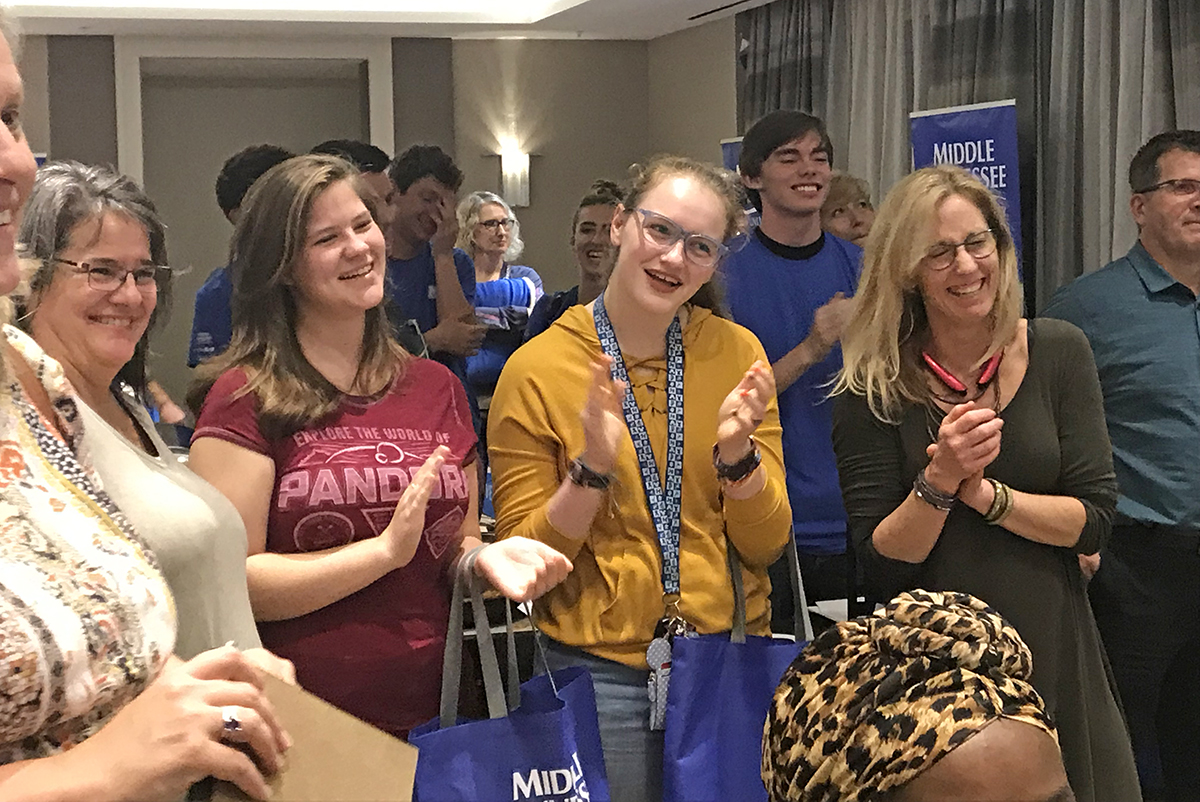 Cruz was among dozens of Atlanta-area high school and community college students attending the MTSU True Blue Tour event in Atlanta Wednesday, Oct. 30, a day after the tour visited Chattanooga to recruit prospective students for 2020 and beyond at the Chattanooga Convention Center.

To see photos from both Atlanta and Chattanooga events, visit www.facebook.com/mtsublueraiders.

“I want to go to school and study music. I want to play music,” Cruz said. “I want to know how to make a record and how to make it sound good. One of my teachers is an MTSU graduate. He said it is an amazing school.”

So Cruz, his father, and his mother, Debbie, checked out MTSU. He applied, was accepted and even attended a CUSTOMS freshman orientation, then chose an in-state route first to improve his grades.

The Cruzes happened to run into MTSU President Sidney A. McPhee at a local shopping mall Wednesday. They recognized him and said they were planning to attend the MTSU event at the Hyatt Regency Atlanta Perimeter at Villa Christina. That night, McPhee called them to the stage to share Jacob’s story.

“We came here last year,” Cruz said of the 2018 True Blue Tour visit. “It was fueling my passion to attend MTSU. I’m extremely excited about the opportunity.”

Saying his decision was “on impulse and to do the right thing,” the president awarded Cruz a $2,500 scholarship. 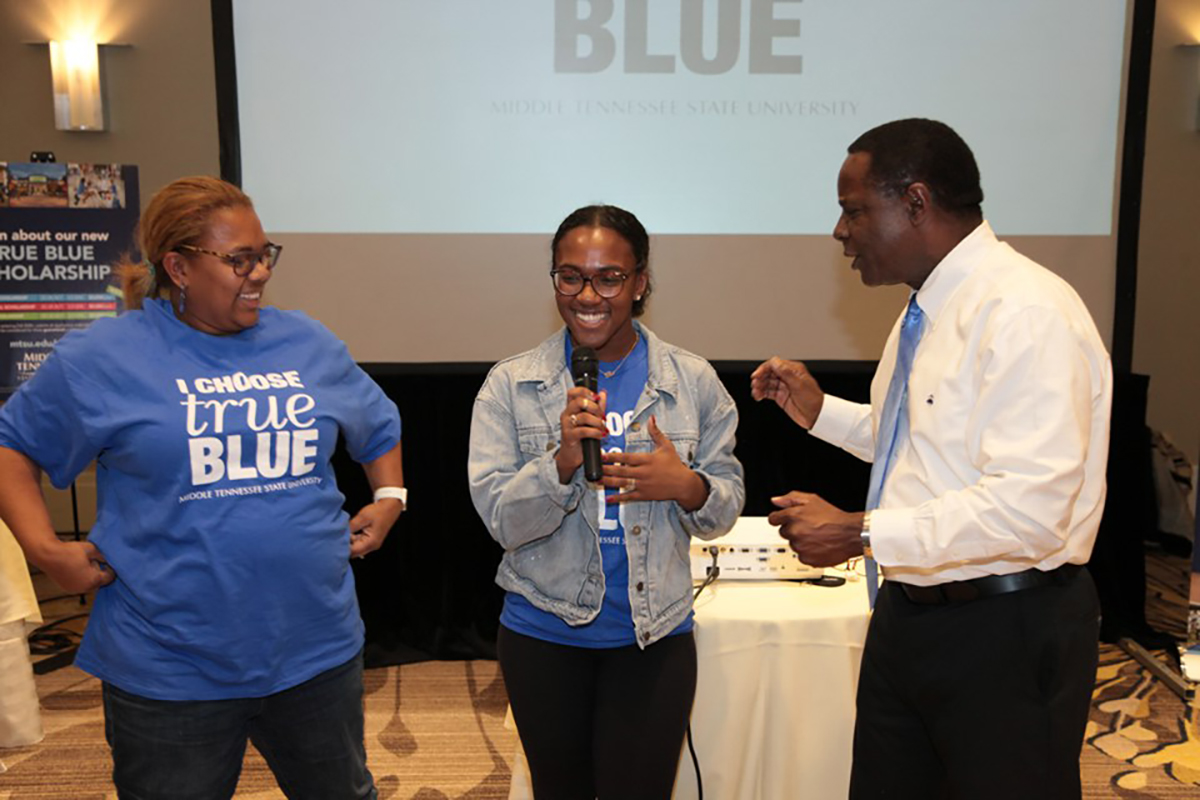 • “That was the best thing ever,” Fran Turner of Mableton, Georgia, said after her daughter Eden Turner, 17, received a $9,000 scholarship when McPhee drew her name.

“The first time I visited MTSU and toured the studios, I had never seen so much equipment,” he said. Keith Sr. said he was impressed by the college’s vintage and new digital equipment. The family said they also appreciated Misty Jones Simpson’s caring, professional manner; she’s an associate professor in the Department of Recording Industry.

• Maybe it’s Atlanta’s proximity to aviation giants Delta, Boeing and other major airlines. Maybe it’s a youthful zeal to fly. But potential MTSU aerospace professional pilot students were all around the College of Basic and Applied Sciences table at the Atlanta stop, sharing with McPhee their interest in MTSU’s aerospace program, one of the best in the nation.

The president made sure they knew about the Delta Propel program, where the airline, which needs pilots and other personnel because of retirements looming over the next decade, will sign them up when they become juniors and have met the program requirements. 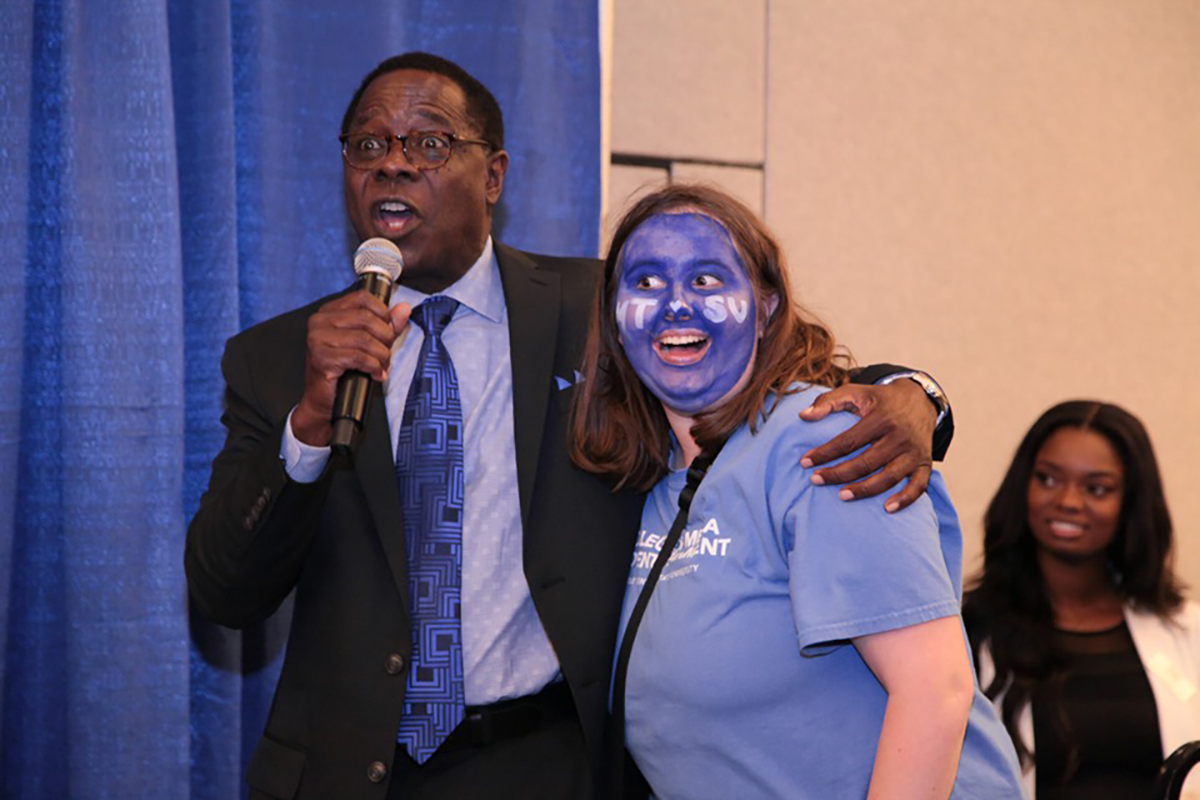 MTSU President Sidney A. McPhee, left, carries on with prospective student Sallie Rawlston of Soddy-Daisy, Tenn., Tuesday, Oct. 29, during the True Blue Tour event at the Chattanooga Convention Center. She received a combined $8,500 in scholarships from the university. (MTSU photo by John Goodwin)

• Sallie Rawlston of Soddy-Daisy, Tennessee, caught McPhee’s attention with her face painted MTSU blue and white. To reward her enthusiasm and her academic efforts, he awarded her a $3,000 scholarship. Later, in a drawing, the Soddy-Daisy High do-everything broadcasting student claimed another $5,500. With a 31 ACT score and 3.89 GPA, she qualifies for a Trustee Scholarship at MTSU and plans to apply for a Buchanan Fellowship in the University Honors College, the top scholarship offered by MTSU. Parents Mark and Gloria Rawlston attended with her.

• Ooltewah, Tennessee, resident Daniel Isaac, 45, said he’s “looking to bring the whole family (to Murfreesboro) and be ‘True Blue.’” Daughter Jazmine, 21, is a marketing student in the Jones College of Business. Son Elijah, 20, aims to transfer from Chattanooga State and study media/sound.

• Alumnus Barry Melton (Class of 1982) of Cleveland, Tennessee, told the audience of the recording industry department’s record growth, explaining that “relevancy” is the key word. “They know what is going on in the marketplace,” he said. “Ninety-five percent of what I learned, I learned at MTSU. I’m proud to be an alumnus. They have brought the world to you. Take advantage of it.”

• Chattanooga State Community College collected $15,000 in scholarships during the luncheon. “I can’t believe it,” said Chattanooga State President Rebecca Ashford. “What a wonderful opportunity for our students who plan to transfer to MTSU.”

On deck for the True Blue Tour: Memphis and Jackson

MTSU wraps up its eighth year of True Blue Tours with a Wednesday-Thursday, Nov. 6-7, visit to West Tennessee.

The university travels to the Memphis area for a 12:30 p.m. Nov. 6 counselors-community college staff luncheon, followed by a 6 p.m. student reception, both at Esplande Memphis, 901 Cordova Station Ave., in Cordova. 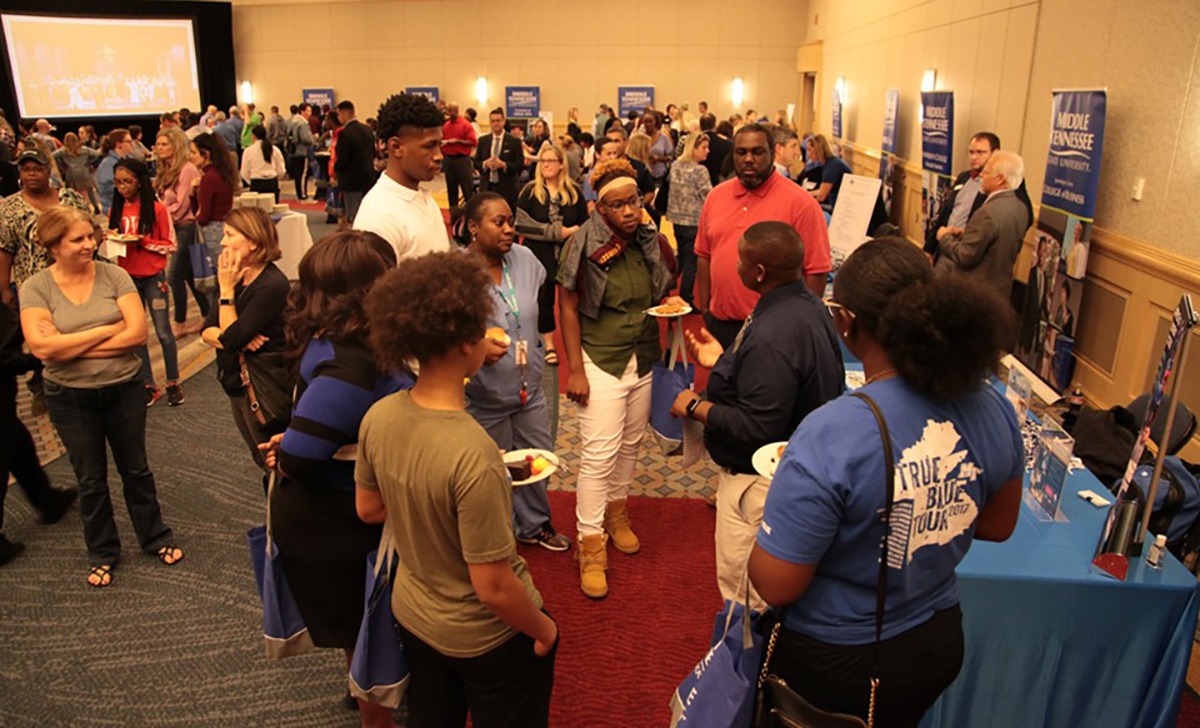 MTSU’s Travis Strattion, second from right, tells a group of prospective students and their parents about the Office of Student Success and other MTSU opportunities Tuesday, Oct. 29, during the True Blue Tour stop in Chattanooga, Tenn., at the Chattanooga Convention Center. (MTSU photo by John Goodwin)