The pace doesn’t let up for MT.. 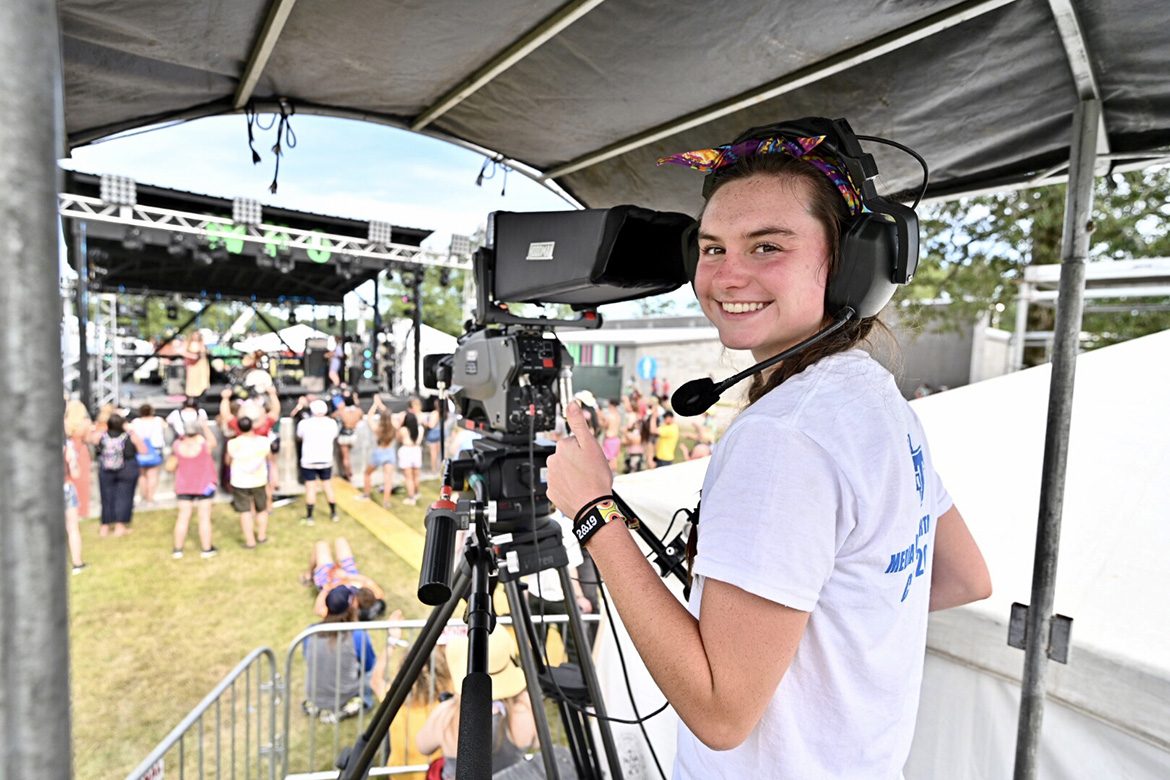 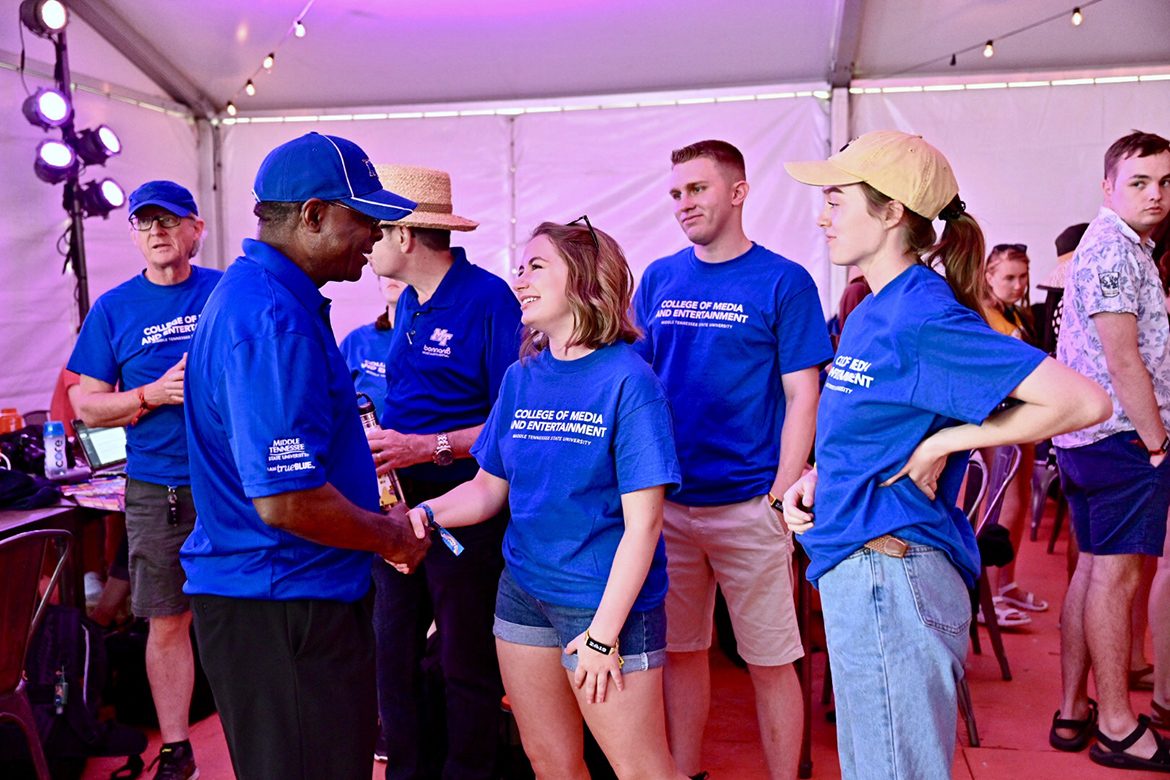 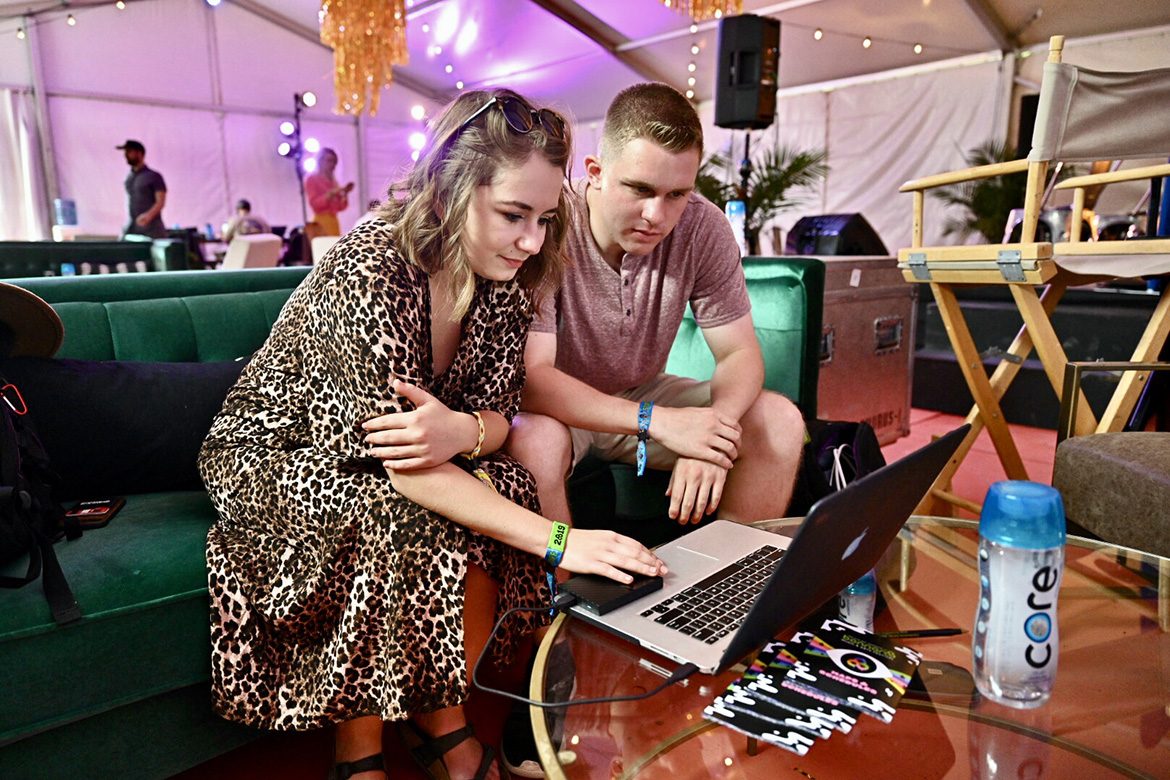 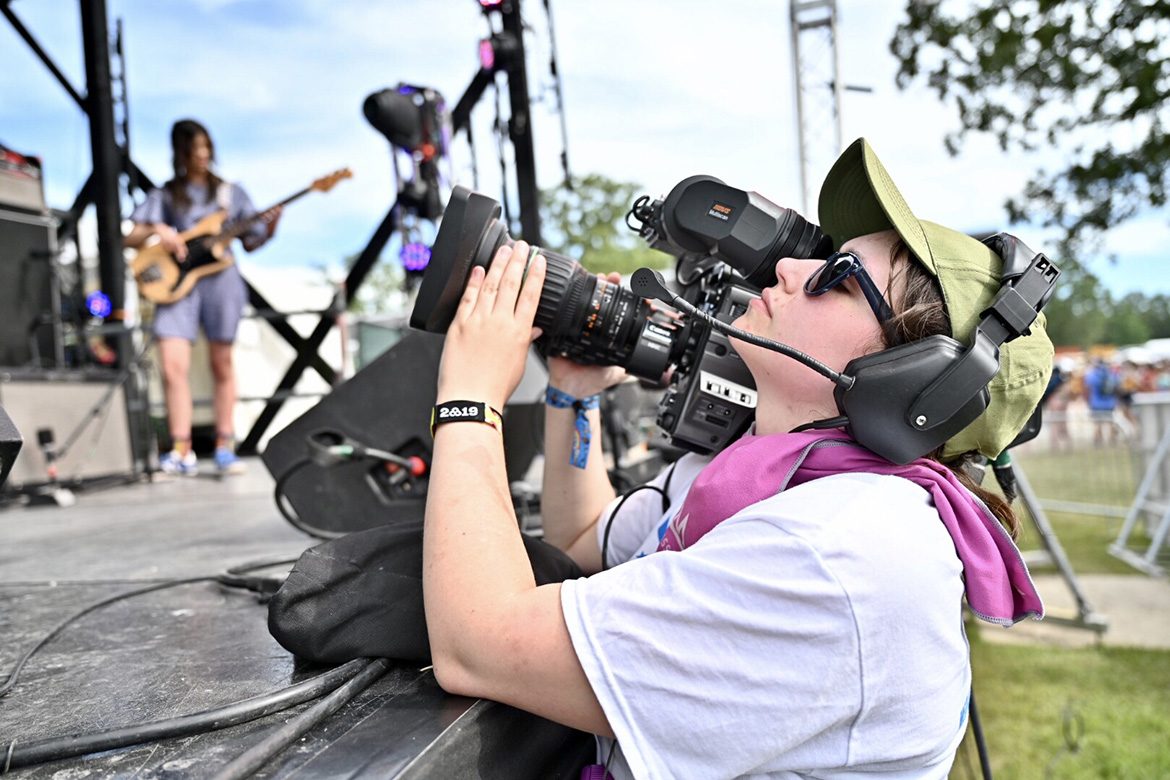 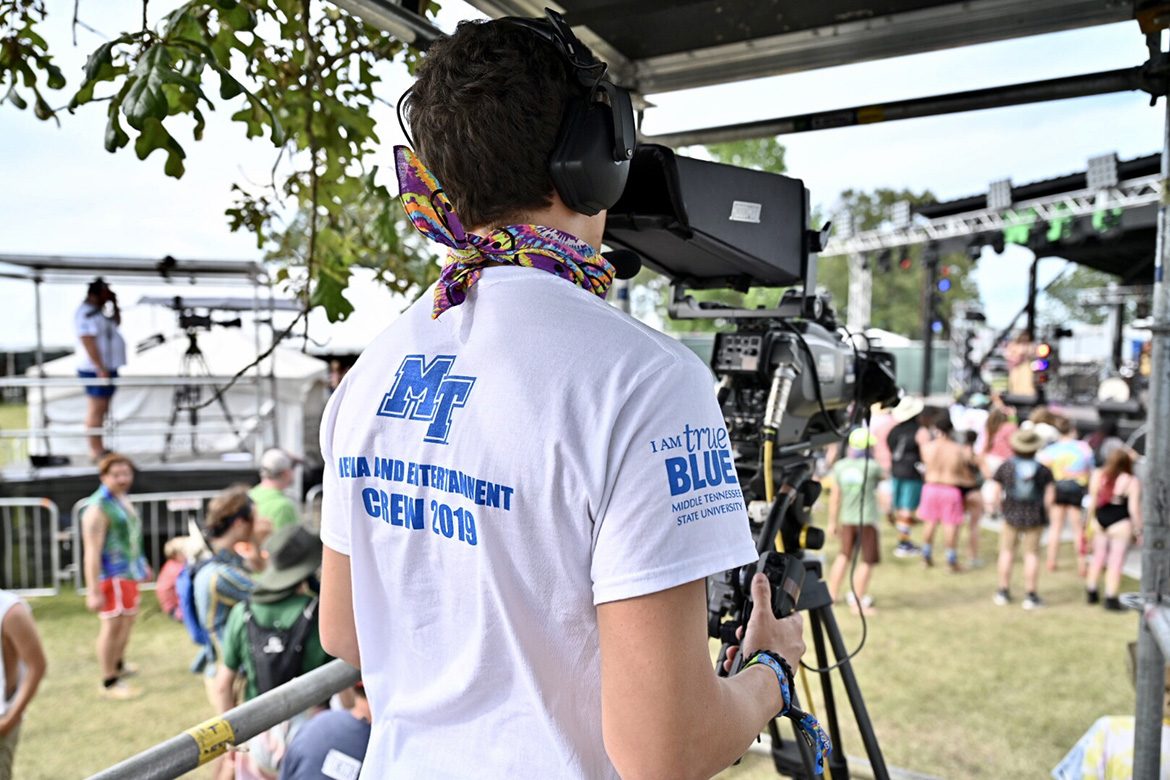 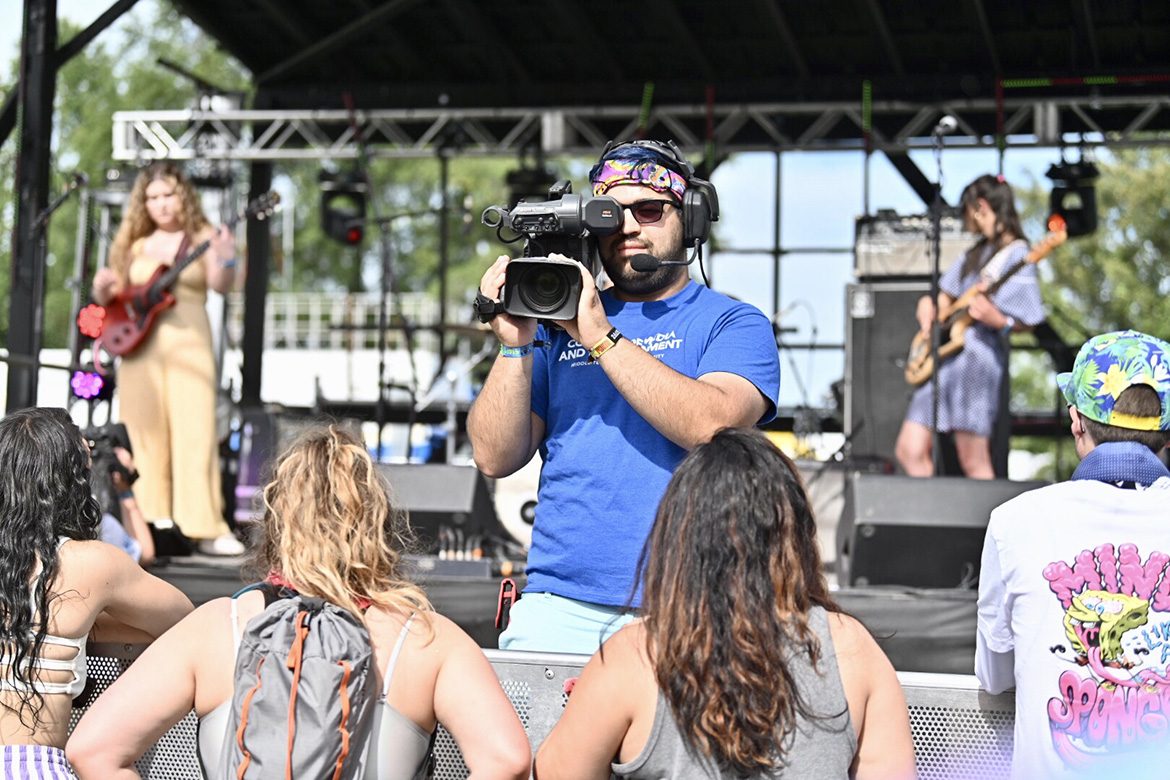 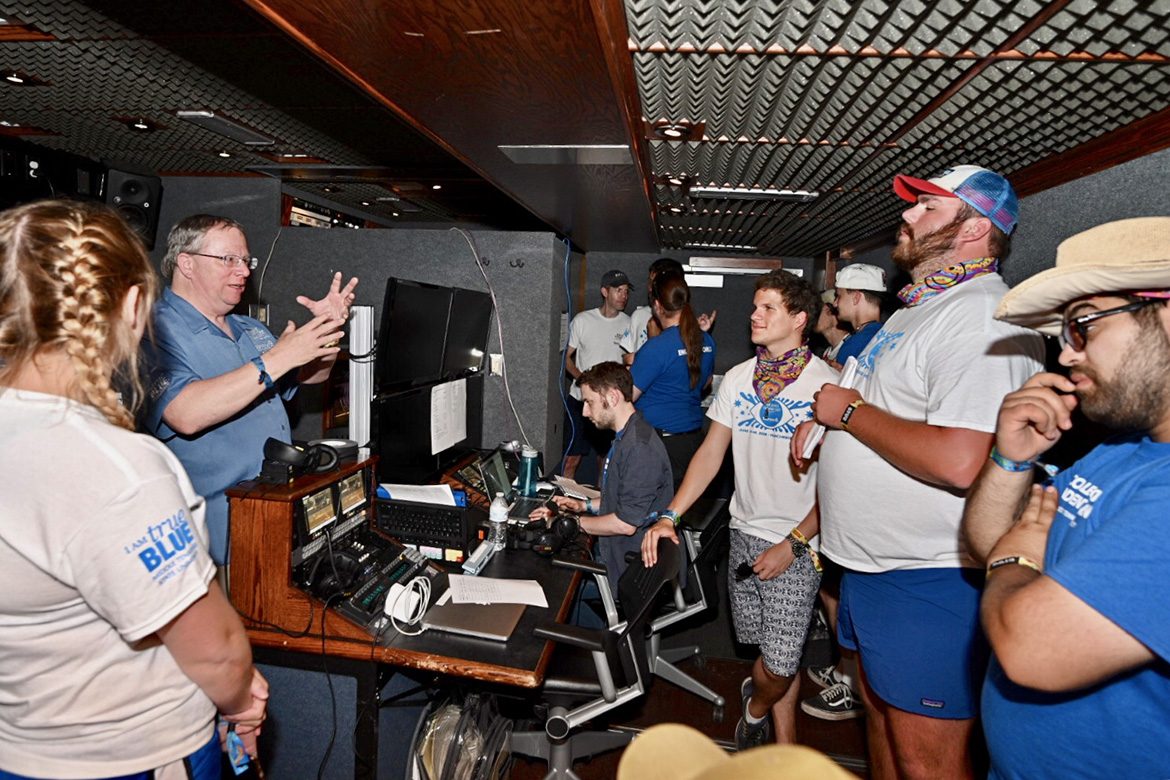 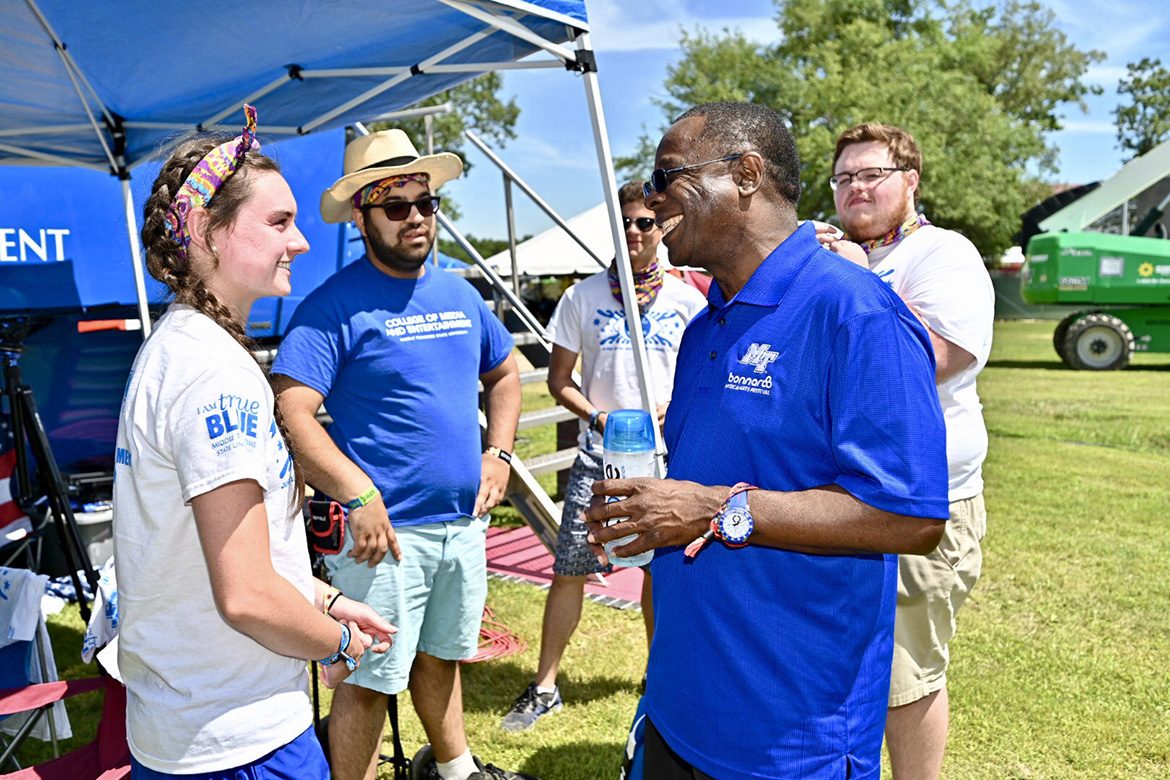 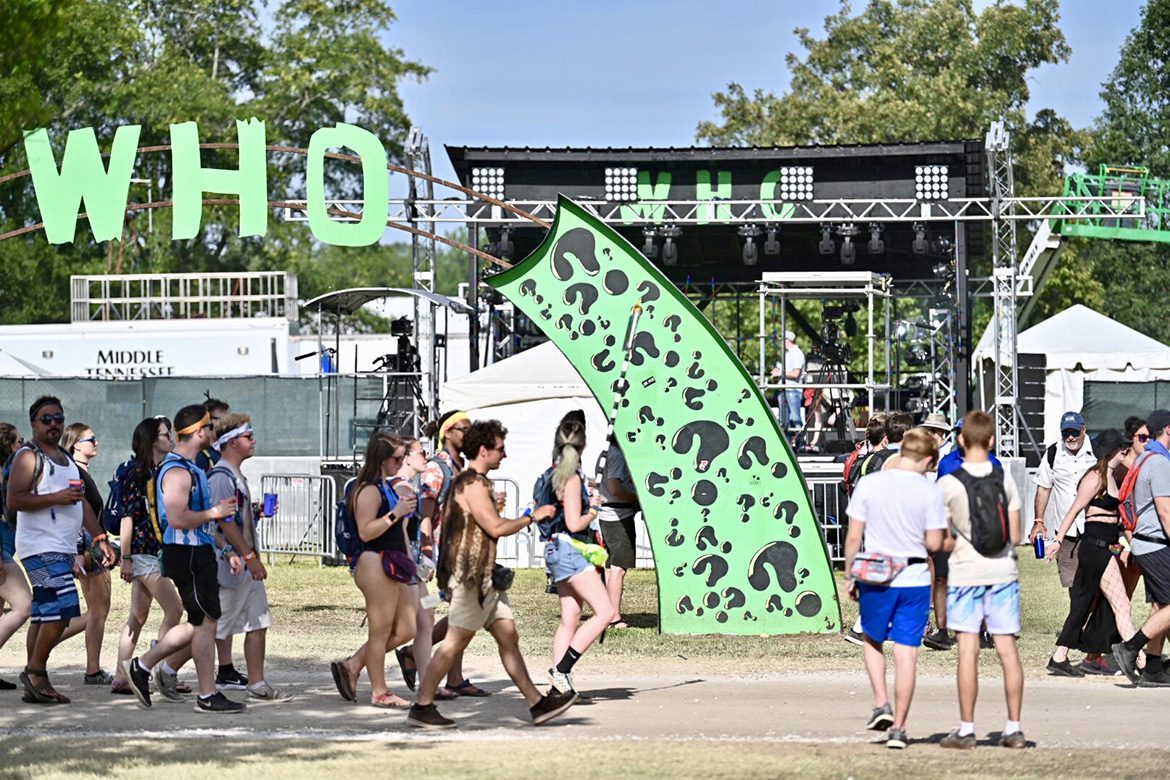 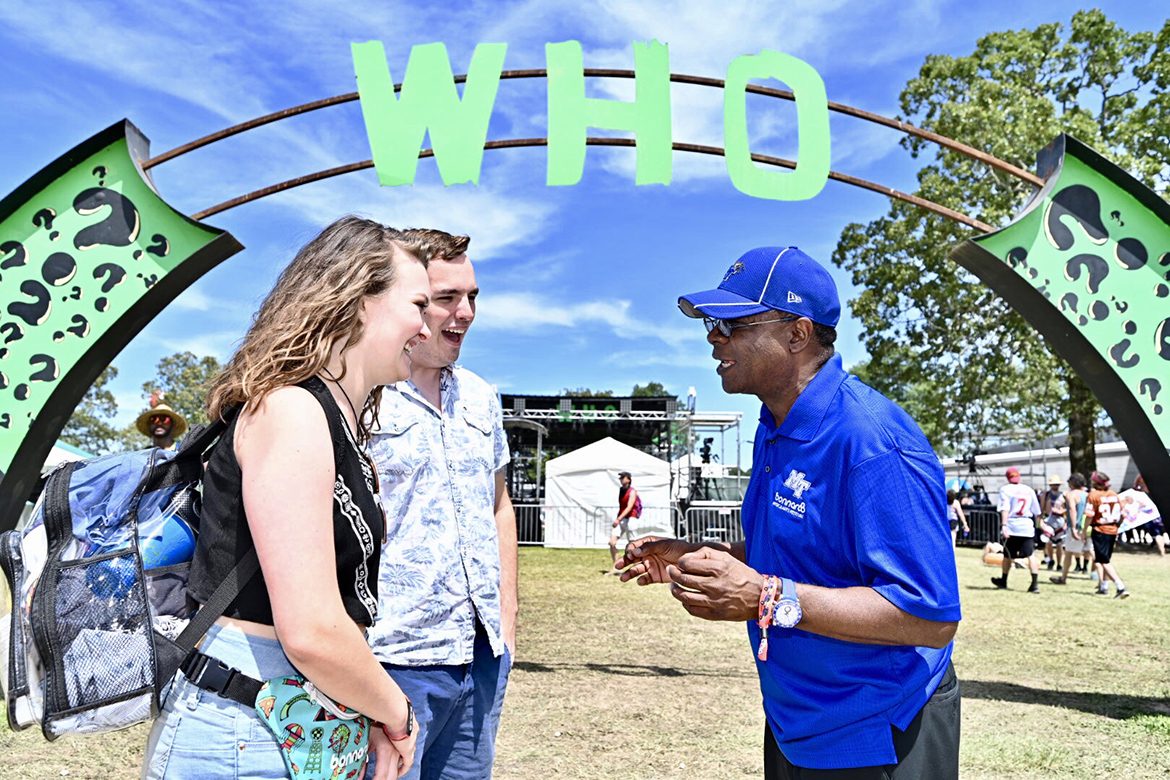 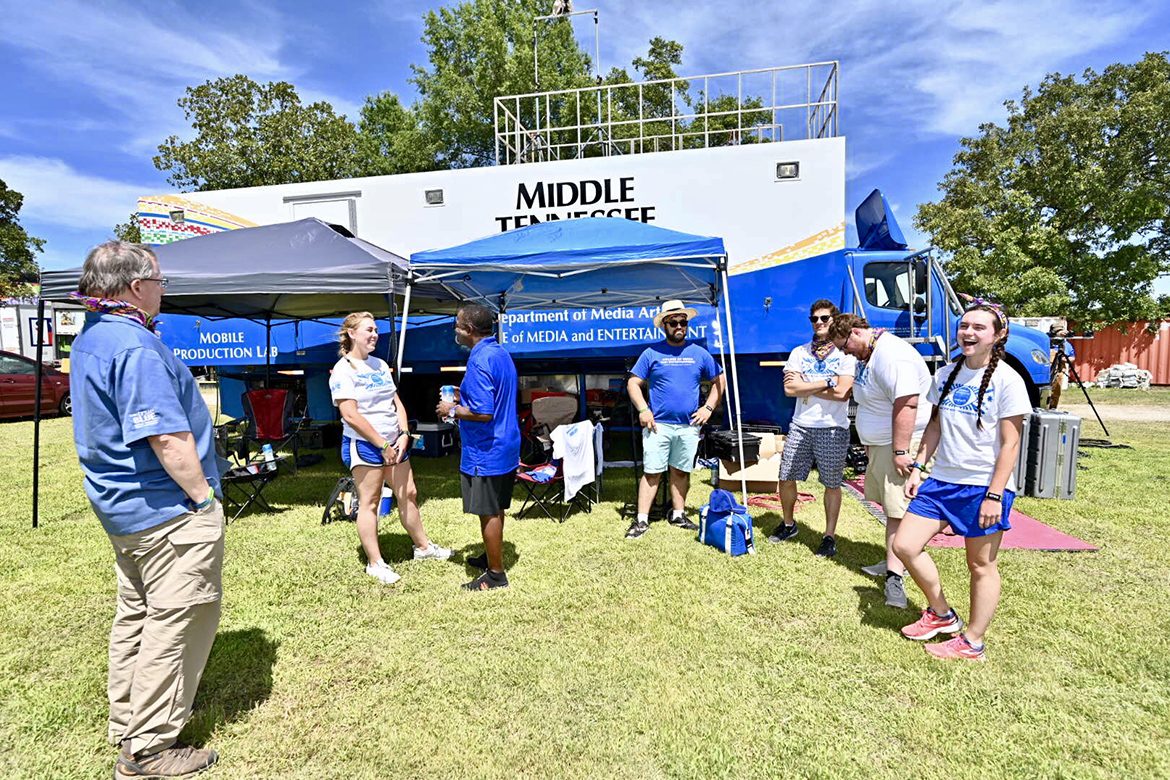 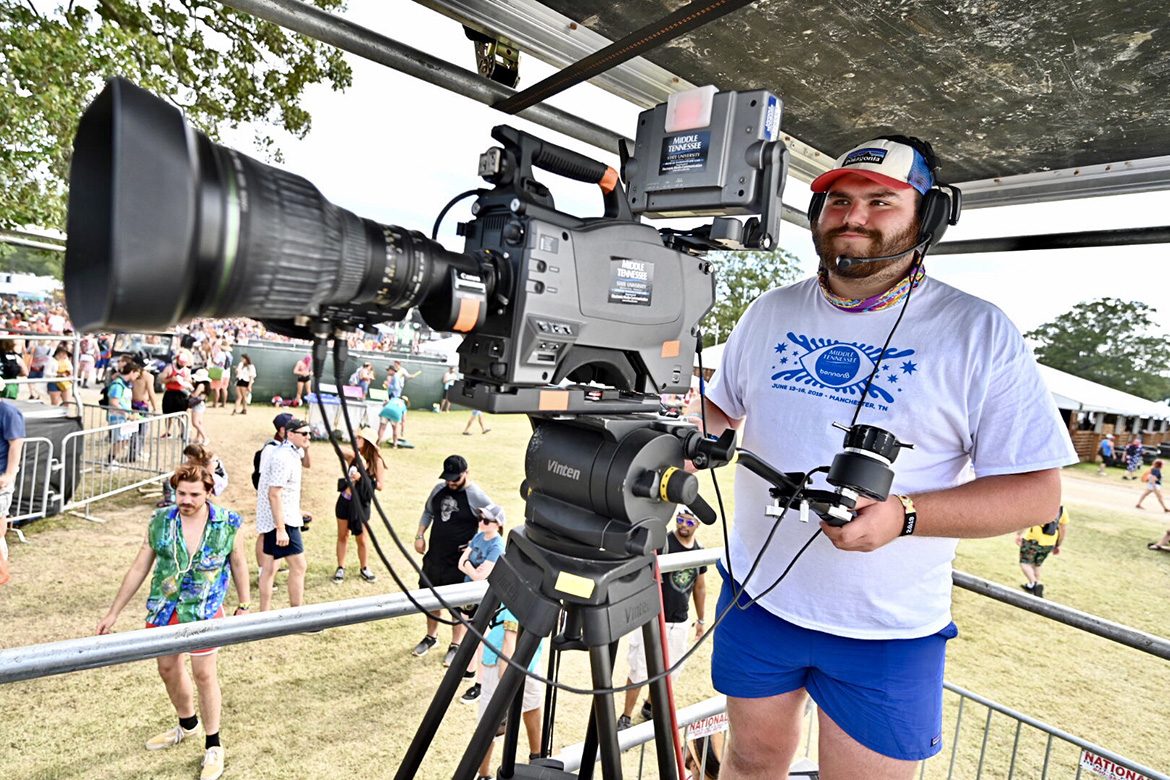 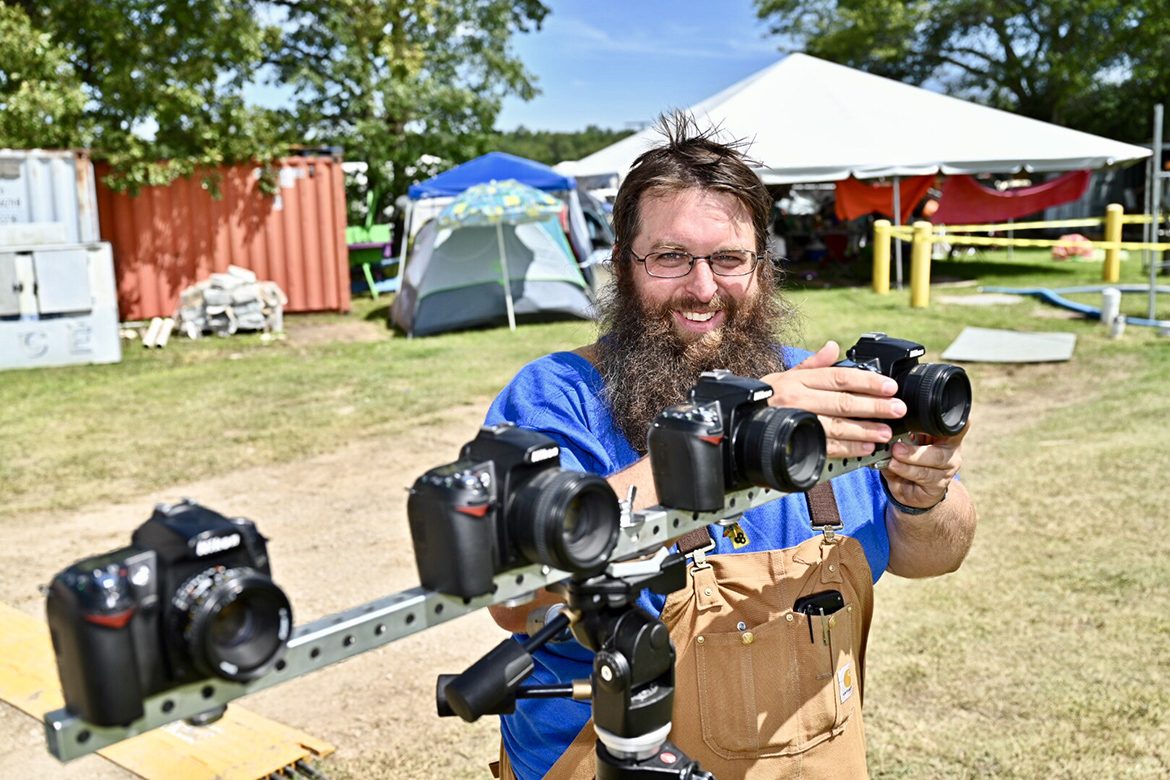 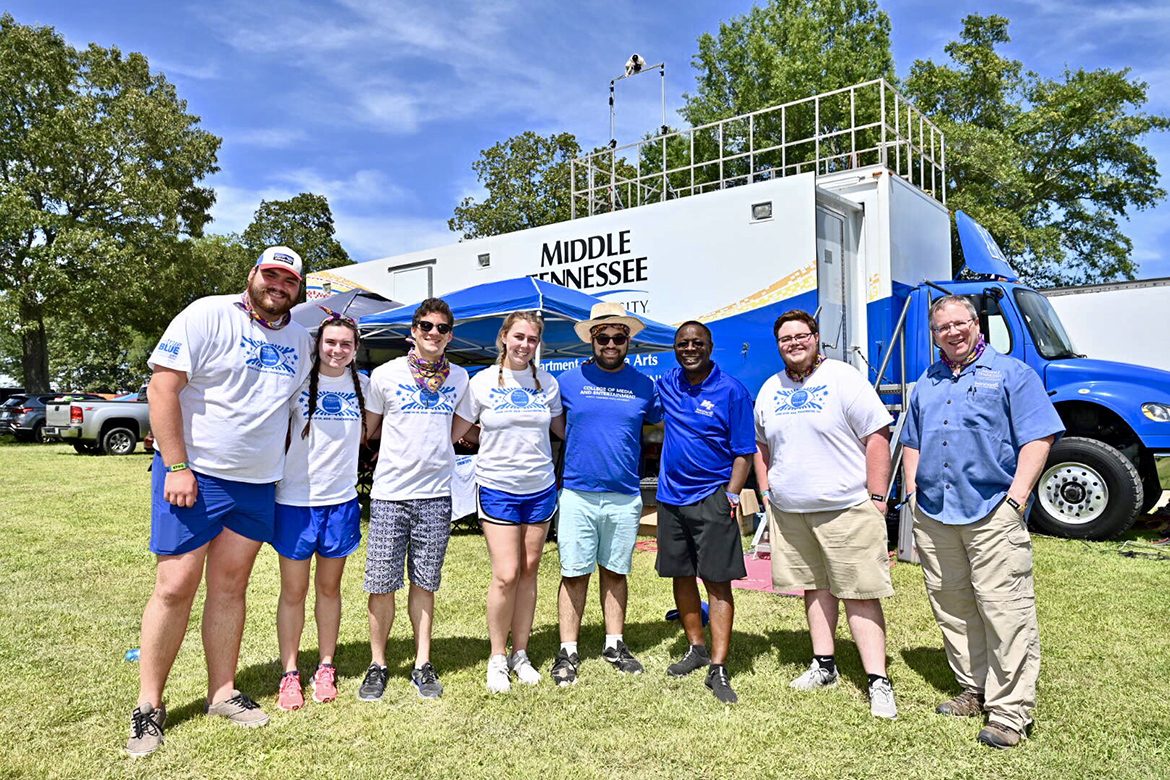 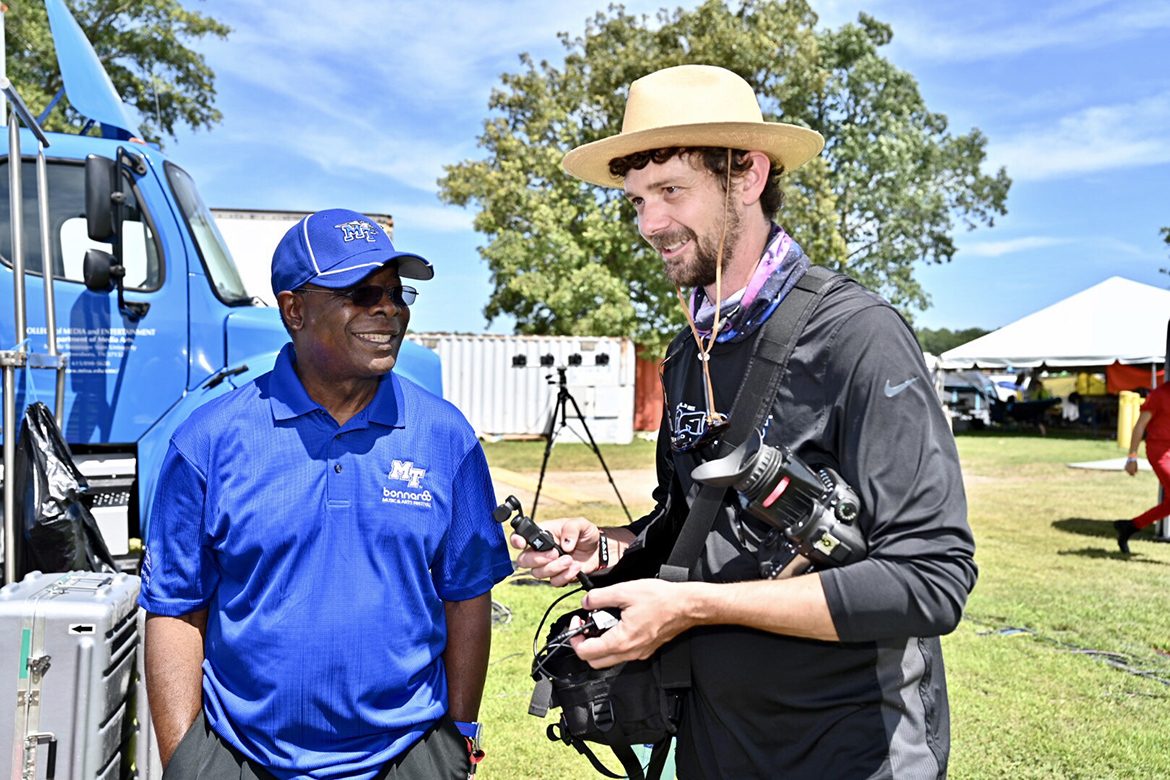 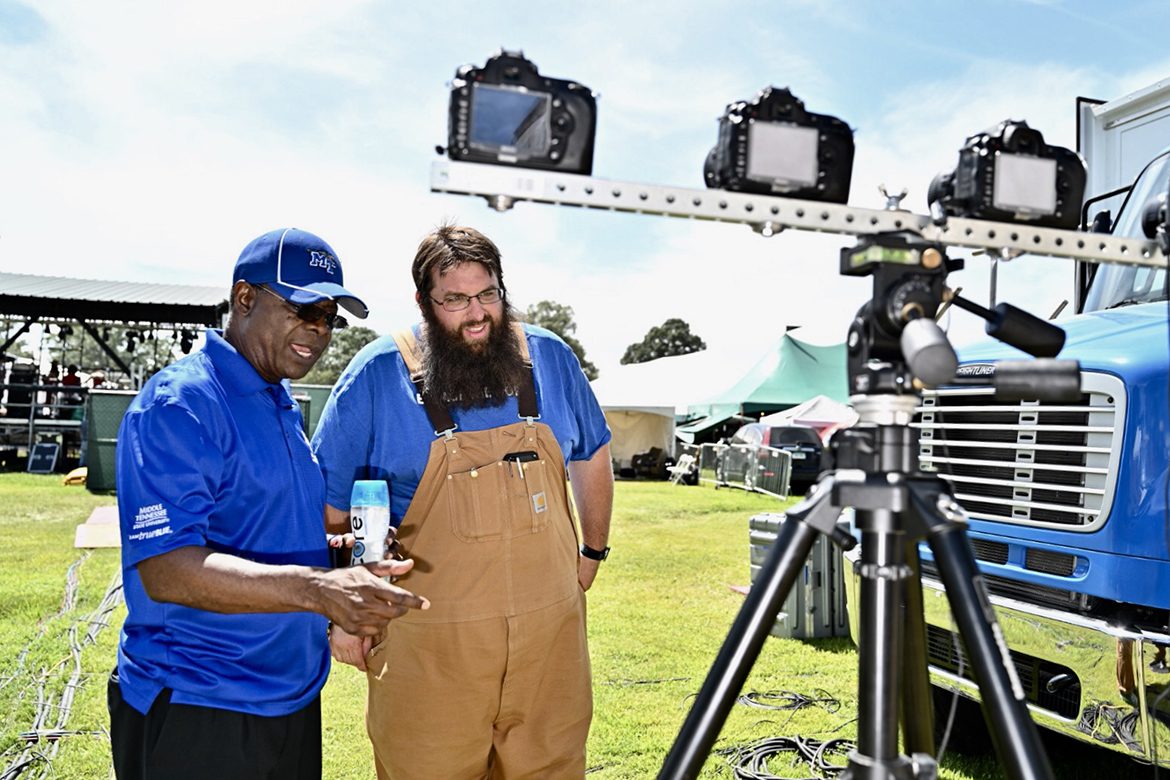 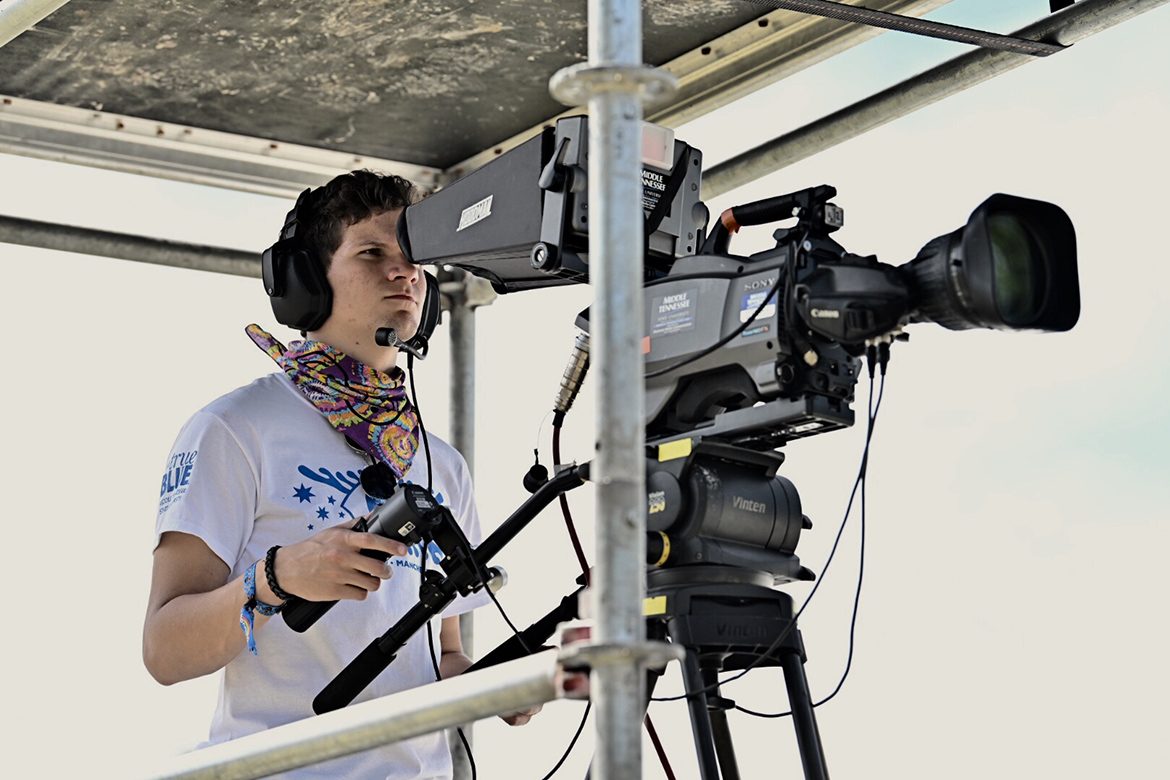 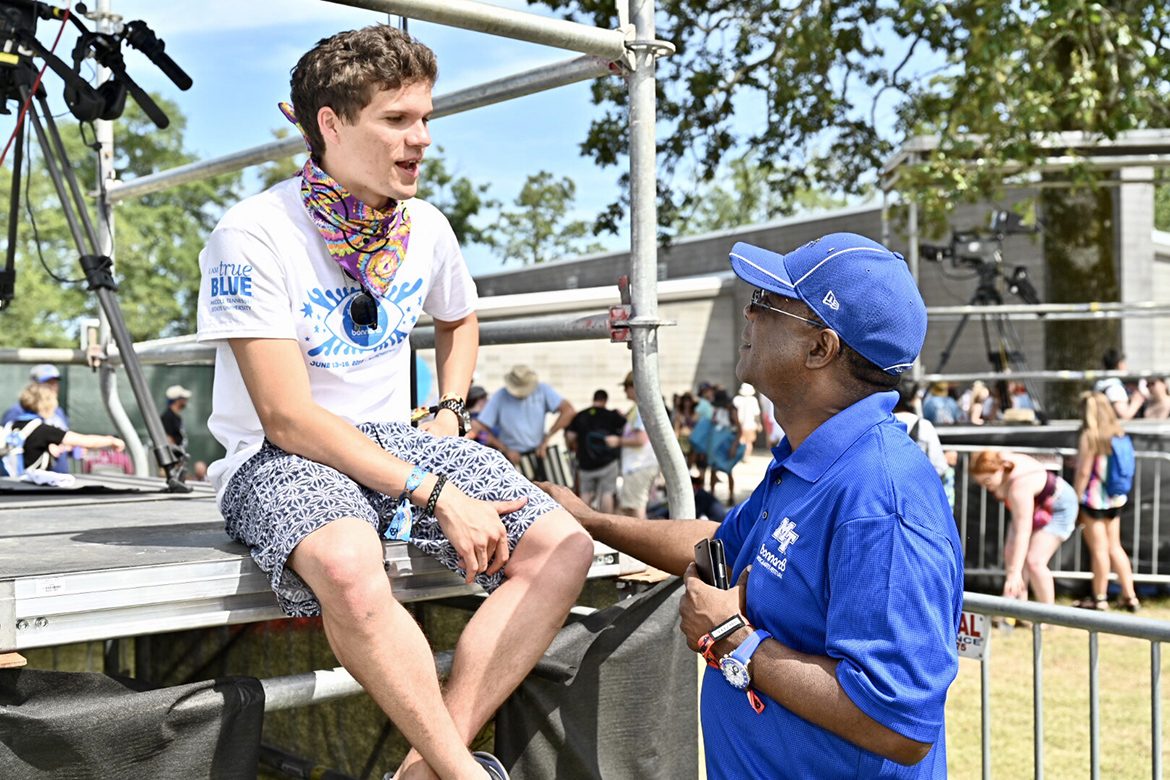 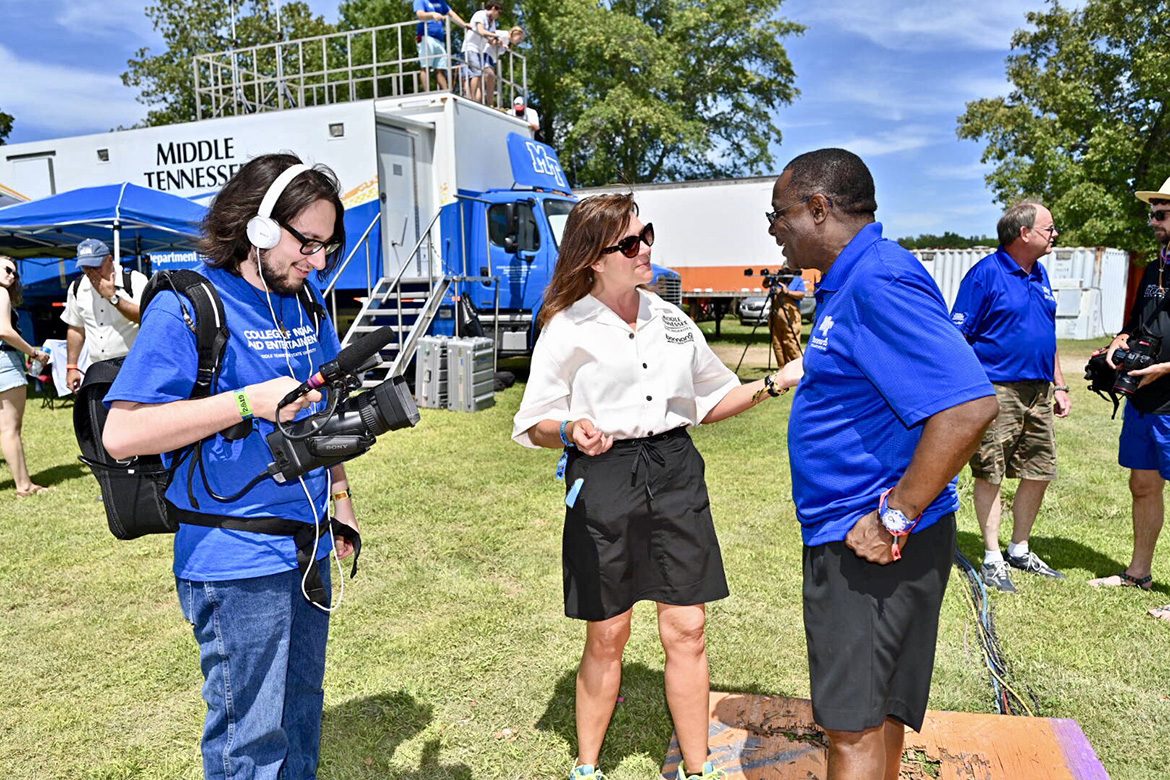 MANCHESTER, Tenn. — MTSU’s second day on its Bonnaroo Campus kicked things up a notch as College of Media and Entertainment students worked Friday, June 14, to capture five live performances in seven hours on the music and arts festival’s Who Stage.

Meanwhile, as the day faded into night and blurred into the next morning, another set of students crisscrossed the 700-acre farm, searching for feature stories and writing about performances for media outlets.

Students and staffers with WMOT Roots Radio 89.5 FM, the university’s Americana public radio station, were readying a makeshift studio in preparations for a live show Saturday, June 15, from the four-day festival. 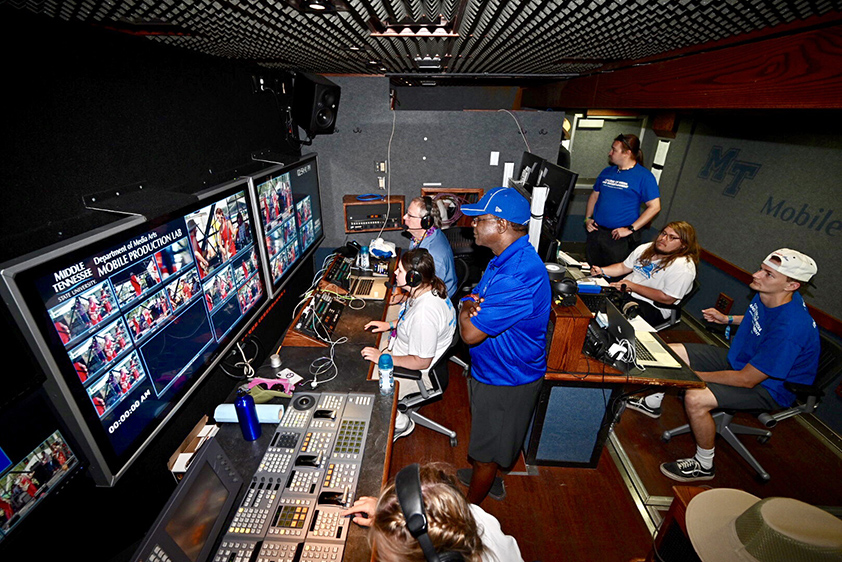 “What sets us apart from others is the immersion,” said College of Media and Entertainment Dean Ken Paulson. “Tonight, our students will head to the campground after a very full day of challenging and often mundane duties under the hot sun.

“Then it’s back to work in the morning. This is no field trip.”

President Sidney A. McPhee visited Bonnaroo Friday to see firsthand the work by students and faculty in the college’s Departments of Media Arts and Recording Industry and the School of Journalism and Strategic Media.

He was blown away by what he saw, particularly while watching the student production team at work inside MTSU’s state-of-the-art, $1.7 million Mobile Production Lab at the Who Stage.

“It was intense,” McPhee said. “Hundreds of decisions, executed with precision, made possible because of prior planning and spot-on teamwork. Students were running the truck, with faculty there for support and guidance.

“This experience helps our students get jobs,” the president added. 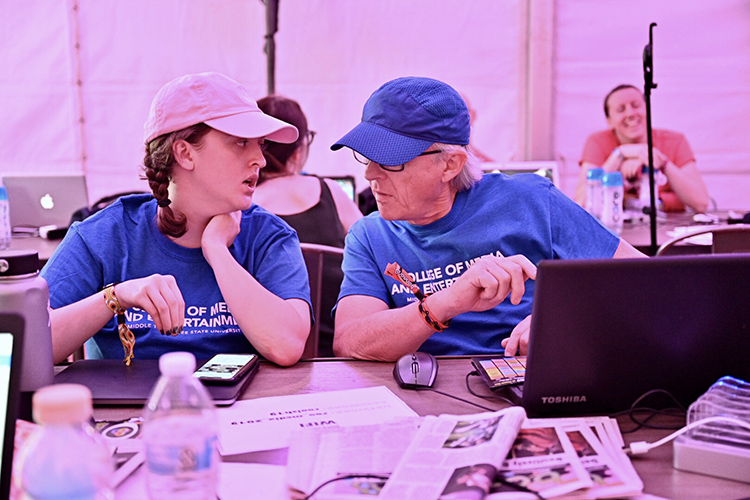 One such student was Zac Leonard, who graduated from the media arts program in 2018 and was part of previous student crews at Bonnaroo. He’s attending this year’s Bonnaroo as concert video producer for rapper Post Malone, one of the nation’s biggest acts on tour.

“My experience with Bonnaroo solidified what I wanted to do as a career — live video for music,” Leonard said. “Bonnaroo with MTSU showed me what the environment of a festival was really like, the quality that is expected from these touring acts and their video crew. 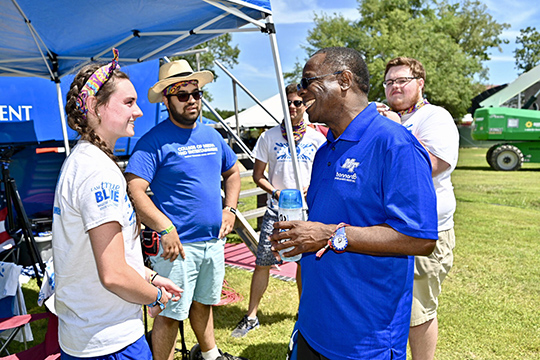 “And in that short time, my time at Bonnaroo showed me how to better shoot a concert in a more creative way.”

Associate media arts professor Robert “Bob” Gordon Jr., whom Leonard calls his mentor, said that “Zac is a perfect example of the direct link between what I teach, what our department and college provides and what the professional world looks for in hires.”

About 35 students from the three academic departments are working at Bonnaroo through Sunday, Paulson said

“Our students walk away from these events with a far better understanding of what it takes to make these high-profile events work,” the dean said. 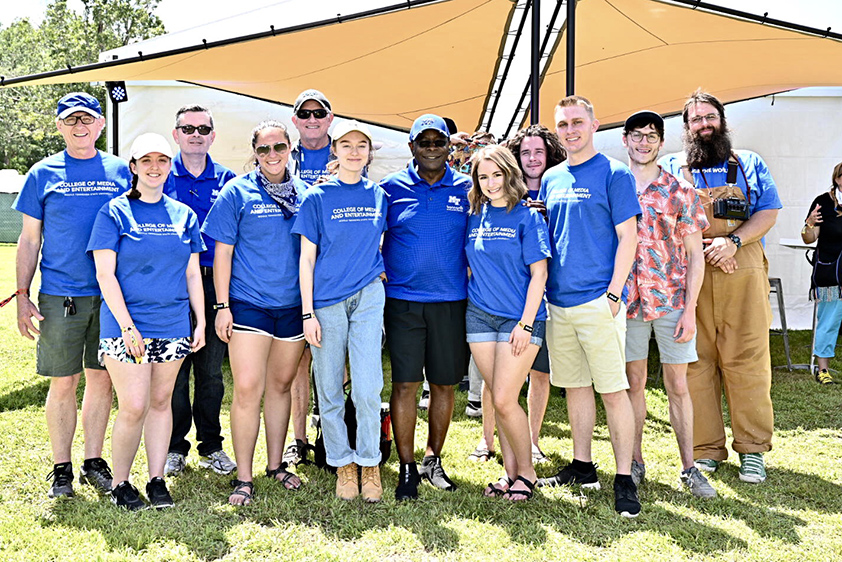 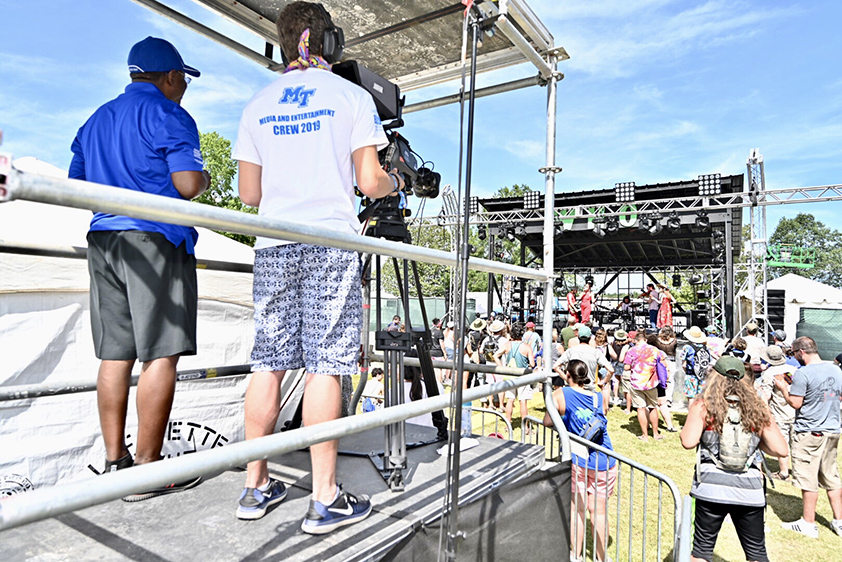 MTSU President Sidney A. McPhee, left, looks on as a media arts student films a performance on the Who Stage Friday, June 14, at the Bonnaroo Music and Arts Festival in Manchester, Tenn. (MTSU photo by J. Intintoli)