When asked what’s changed in the face of the COVID-19 pandemic, Josh Stone, MTSU’s associate director of recreation programming and supervisor of the campus’ Bike Shop, replied, “Everything.”

From entering the Campus Recreation Center to exit, everything has been assessed and retooled or delayed in order to keep everyone safe.

In addition to following standard COVID safety protocols such as mask wearing and social distancing, Stone and his three student mechanic staff at the Bike Shop now offer curbside service outside of the shop’s garage bay. It’s located underneath a white tent at the back of the building. 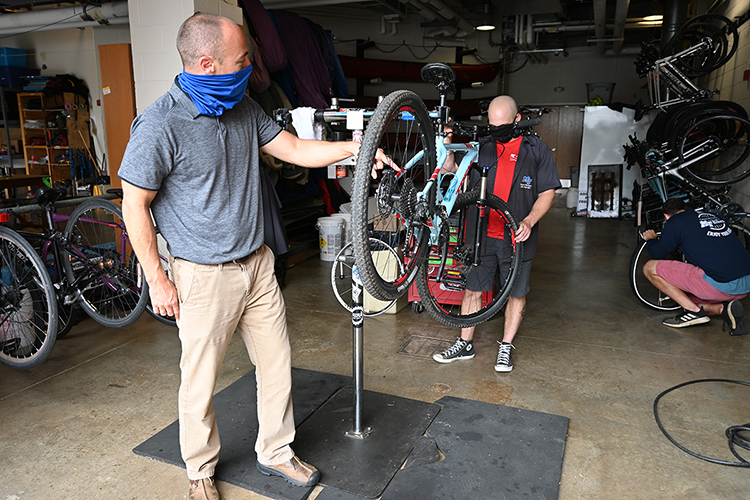 Bikes being received or returned are stored outside to eliminate bike-to-person contact and to expose the bikes to natural, ultraviolet light, and customers are asked to remain outside of the shop.

Instead of sharing tools for bike repairs, employees now have three color-coded sets to eliminate spread. Repair stations are distanced six feet apart, and the repair workshops the facility puts on have been put on hold. They’re very interactive classes, and Stone knew they wouldn’t be able to implement best teaching practices over Zoom. 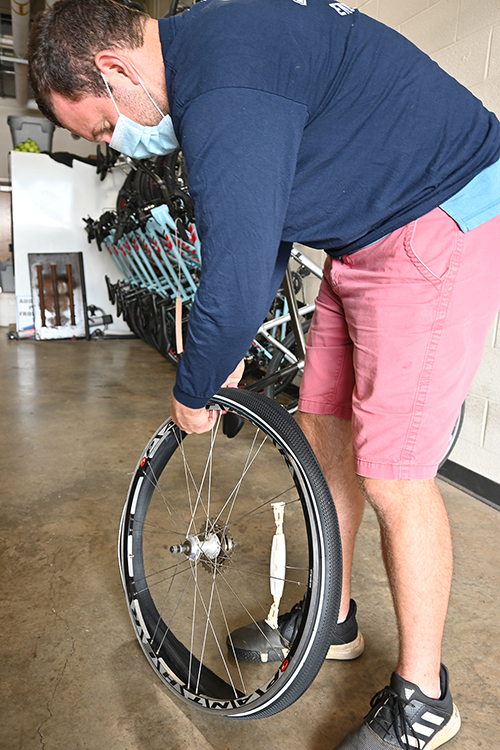 Bike rentals are a $35 flat fee for the full semester and include a lock, helmet and all the maintenance and upkeep costs. Rentals have been great for “students who don’t have transportation,” said Stone, and are often used by “international students” and “freshmen.”

There are over 30 bike racks throughout campus, the most recent covered racks installed outside of Peck Hall, so it’s easier than ever to lock up a bike on the way to class.

The best part of the shop for Stone is the “story” as to “why a bike is in (a person’s) life.” He reminds bikers to wear a helmet, use the bike lanes and ride safely with appropriate attire. The shop is open Mondays, Tuesdays, Thursdays and Fridays from 1 to 6 p.m.

Andy Allgrim, Campus Rec’s facility coordinator, explained the center’s new “contactless” entry feature that replaced the hand scanners, which were no longer “going to fly” in the wake of COVID.

Though the rollout of the new system aligned with the onset of COVID, the plan had been to adopt the technology even before the virus hit. The new system, used by scanning a barcode accessed through the MTSU campus recreation app, not only eliminates unnecessary contact but makes entry into the rec center faster and more efficient.

The Rec’s capacity has been decreased to 125, but they haven’t yet hit the new capacity limit. To keep track of this number, users must scan in and out. Allgrim notes that though they’ve exceeded 100 people on occasion, they’ve averaged 50 to 60 people since the fall semester began. The center is busiest between 4 to 5 p.m. 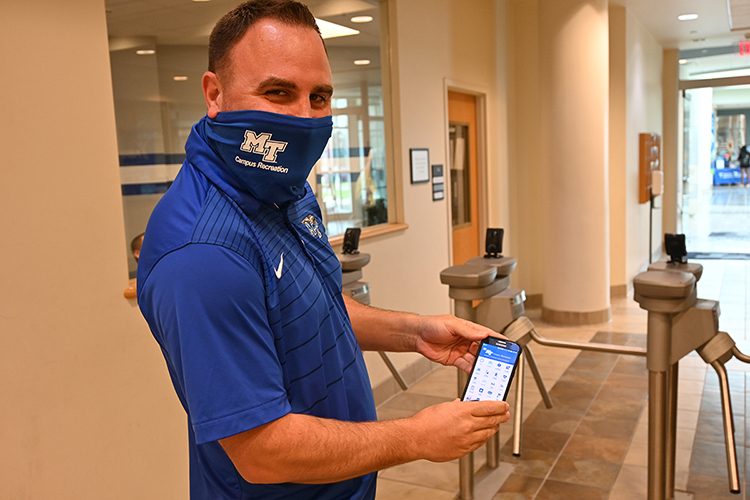 The weight room, cardio room and functional fitness rooms are open, and a limited selection of fitness classes are available. Registration for classes can be done over the app and cost $2 each or $15 per semester for unlimited access.

Upon entry, each person picks up a personal spray bottle with a cleaning solution and microfiber towel to wipe down equipment after use. Workout time has been set to one hour to minimize exercisers’ exposure to others.

Staff sanitizes equipment a second time after use and also wipes down equipment in an assigned zone hourly. Every night the staff cleans the center with an electrostatic mist that “kills everything,” said Allgrim.

The employees at the center worked hard to welcome the community back in the safest way possible. In addition to following all of the new safety rules, Allgrim advised that users bring only the “bare necessities” when coming in for a workout. 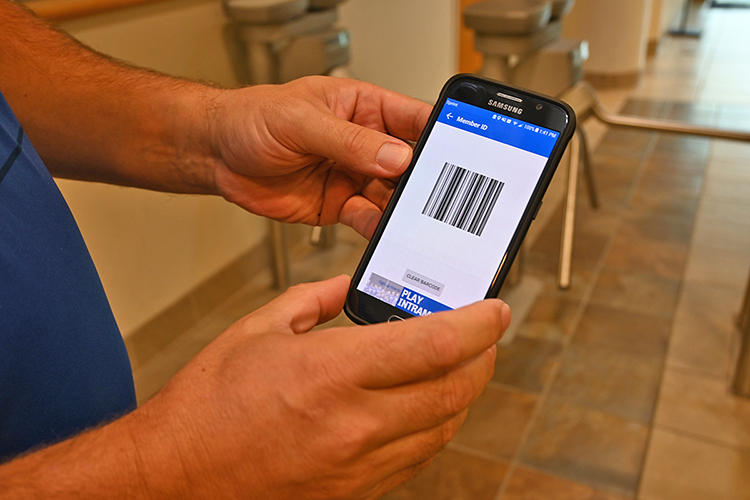 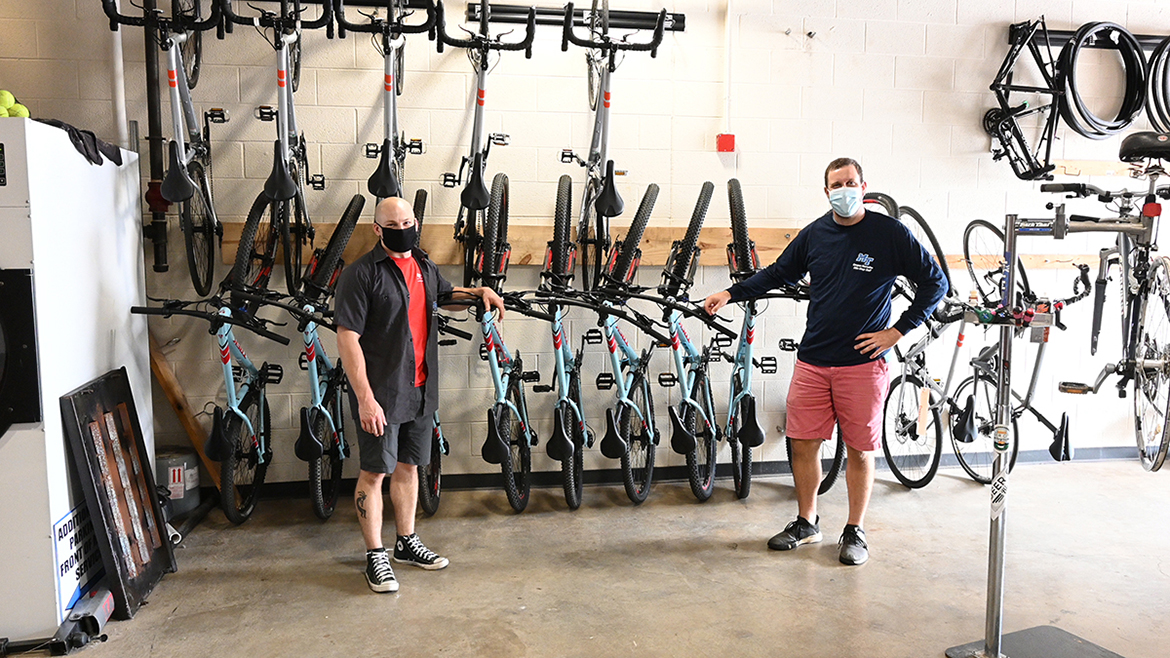