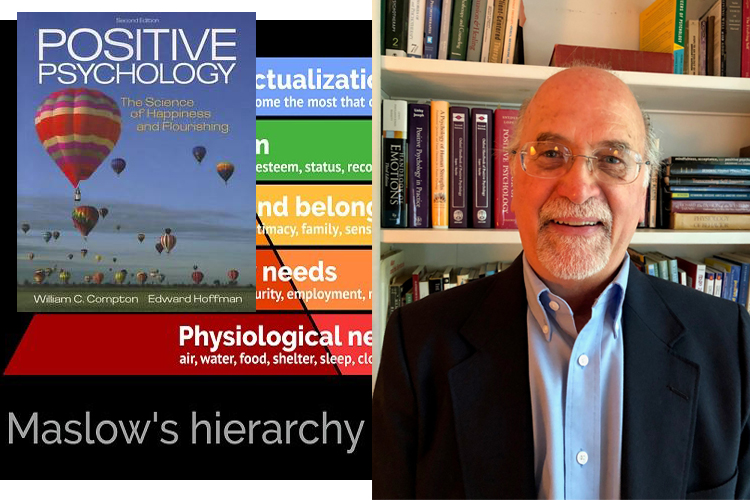 If the beginning of the New Year finds you in a contemplative mood about New Year’s resolutions and how to improve your life, you might take a cue from Abraham Maslow, a 20th-century American psychologist whose work is cited in academic journals and studied in universities worldwide. However, there are numerous myths about Maslow’s theories that abound and should not be accepted as part of his work.

Those myths are debunked in a scholarly writing by MTSU psychology professor emeritus William Compton, who has studied Maslow’s concept of “self-actualization,” or reaching one’s fullest potential.

For more than 50 years, Compton, who is an adjunct professor in the College of Graduate Studies, has examined how people pursue well-being in their lives. He wrote the world’s first comprehensive textbook on positive psychology in 2004. The third edition, co-authored with Edward Hoffman, will be available in 2019.

Compton said Maslow is best known for creating a “hierarchy of needs,” a ranking of human development covering basic needs like food and shelter to mental and emotional needs. The hierarchy frequently is expressed in a pyramid shape, but Compton said Maslow found that to be problematic.

The pyramid often misleads people to think they have to meet the lower needs fully to progress to the higher ones, as though life were a ladder-like existence.

“He said that you move back and forth between the needs, depending on the situation, depending on where you are in your life at a certain point in time, and it’s a very dynamic and fluid process,” Compton said.

Another assumption about the hierarchy is that it ignores intellectual and creative needs. Compton asserted that Maslow believed some of us don’t necessarily have to be brainy or artistic to be our best possible selves.

Compton said self-actualization is not elitist, even though “self” is part of the word. In fact, Compton contended, Maslow thought self-actualized people tend to think more about others than themselves because they’ve moved beyond their basic needs.

In fact, in his later years, Maslow observed that many self-actualized people had a strong spiritual orientation. Compton said that helping others and being of service gave those people a sense of connection with the rest of the world, with a larger reality than just their own lives.

Even so, those who look for a quick fix for depression or malaise won’t find it in Maslow’s philosophy. Compton warned that Maslow never claimed that self-actualized people are happier than other people. However, Maslow did say that self-actualization was available to anyone at any time, regardless of oppressive circumstances.

“Social aspects of our life — racism, sexism, a number of those kinds of issues — none of those had to get in the way,” Compton said. “You could become a self-actualizing person in spite of all that.”

Compton retired from MTSU in 2016. His article, “Self-Actualization Myths: What Did Maslow Really Say?,” was published in the Journal of Humanistic Psychology in March 2018.