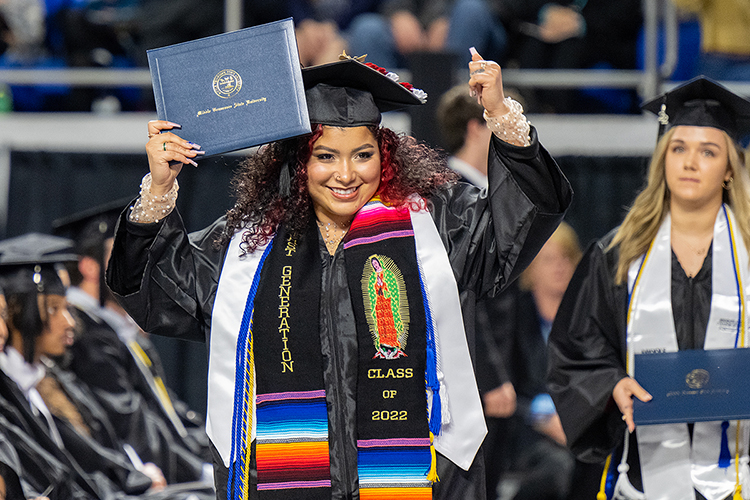 Persistence has been the key for members of the final Class of 2022 at Middle Tennessee State University, who accepted the challenges of earning a college degree while also facing global health, political and economic crises at their front doors.

Ankit Bhusal, 22, of Tulsipur, Nepal, is the first in his small family to graduate from college, “so this means a lot to me,” he said of the morning ceremony where he received his degree from the College of Basic and Applied Sciences.

“Coming to the U.S. and MTSU in 2018 to follow my dreams was an excessively big opportunity for me to grab a world-class education.”

The computer science major navigated culture shock and language differences, as well as being without a car, with help from friends and his own determination. Combining his parents’ financial support with an International Merit Scholarship and four years’ work with the MTSU Foundation and university Development Office funded the education he sought.

Praising all the MTSU faculty and employees he’s encountered, Bhusal said he will particularly remember English instructor Lori Yvette Lee’s compassion for “understanding where I came from (in) adapting to my first semester.”

“She changed her delivery methods to make sure I was equally engaged in the classroom as my classmates. It’s MTSU’s extra commitment to help students succeed.”

The “big soccer fan” said graduate school, most likely in MTSU’s Department of Information Systems and Analytics, may lead him to a data science career in the sports industry.

Afternoon guest speaker Ronald Roberts, a two-time MTSU alumnus and managing partner for the global marketing agency Finn Partners, said graduates can learn from and use all their experiences as they venture into their lives’ next phase.

He told the students to keep their ABCs in mind, saying “a” is “a foundation of a lot of powerful things — a dream, a vision, a victory, a loss, a family, a friend, and for each of you, a degree.”

“B” can stand for “because,” he said, since it’s “the reason or cause” for their actions. And “c” brings the “crazy.”

“Part of Webster’s defines ‘crazy’ as ‘very enthusiastic or eager; with great energy, intensity,'” explained Roberts, who’s served MTSU in roles ranging from handling university public relations and teaching to leading the MTSU Alumni Association to the current presidency of the MTSU Foundation. “In many instances, embedded in your ‘crazy’ is ‘courage,’ ‘confidence,’ ‘charisma’ and ‘caring.’

“Look at what you’ve done, all of you. Those of you who are first-generation college graduates, those who may have been financially challenged, who are nontraditional … today you’re standing in an arena that’s 50 years old, sitting way too close to somebody you do not know, wearing a robe that … just … doesn’t … feel right, a hat that I’m still not sure I have on right, listening to some man who you’ve never met telling you to ‘embrace your crazy.’ What a world!”

This fall graduating class, the first of MTSU’s 112th academic year, includes 1,345 undergraduates and 353 graduate students, according to the university Registrar’s Office.

That second figure includes 329 master’s and 14 education-specialist degree recipients and 10 new doctoral degree-holders, along with six graduate students and three undergrads who received certificates for their advanced study.

Saturday’s graduation put the total number of MTSU degrees earned since its 1911 founding at more than 178,200.

The ceremonies also came the day before the 50th anniversary of Murphy Center, site of the university’s commencements, ball games, classes, concerts, track and field competitions and other special events since late 1972.

Next Thursday, Dec. 15, MTSU will mark the anniversary with a Blue Raiders men’s basketball game against the University of Tennessee-Chattanooga, featuring special retro uniforms. The MTSU and Vanderbilt players who competed in that inaugural Murphy Center game in 1972 also will be honored.

Murphy Center recently received a $6 million renovation to modernize the facility, including replacing the distinctive glass panels of “the Glass House.” It’s part of the “Build Blue” capital campaign to raise more than $100 million to upgrade MTSU’s athletic facilities.

Citing the last few years of national and international acclaim for everything from MTSU programs’ educational value for budget-minded students to the quality of its doctoral research, university President Sidney A. McPhee nodded toward the Murphy Center renovations as he reminded the graduates that “we are no longer a ‘best-kept secret’ in higher education.”

He cautioned however, that a high profile isn’t MTSU’s goal.

‘”What truly matters is our commitment to the individual success of each and every student in our True Blue family,” McPhee said. “MTSU is indeed Tennessee’s ‘University of Opportunities.’ Candidates, I am very grateful that you chose this university as the place to pursue your academic dreams.”

‘Don’t ever give up on yourself’

Morning guest speaker Doug Kreulen, president and chief executive officer of the Metropolitan Nashville Airport Authority, encouraged the students to keep chasing their dreams while acknowledging the reality of life off campus.

Noting the challenges he faced looking for new civilian opportunities after retiring as a colonel from the U.S. Air Force, Kreulen told the graduates that, regardless of their majors, they’re all now in sales, too.

“You are selling your talent, knowledge, skills and experience to your future employer,” he said, explaining that despite retiring as a colonel, his initial efforts to land an aviation management job didn’t take off.

He persevered, gaining invaluable experience at a smaller airport and using the education and training he’d sought over the years to reroute his flight plan to Nashville.

“Don’t ever quit, don’t ever give up on yourself, and don’t be afraid to fail,” Kreulen said, telling students graduating in several fields to “CALL ME, WE’RE HIRING.”

“We all make mistakes, and through those mistakes we gain knowledge and experience. … Don’t stop trying to improve yourself. Don’t quit at anything, and enjoy the journey.”

The December 2022 graduating class at MTSU comprises scholars from all MTSU’s colleges, including the College of Graduate Studies, Behavioral and Health Sciences, College of Education, the Jones College of Business, College of Liberal Arts, College of Media and Entertainment and the University College, along with Basic and Applied Sciences.

Master of Public Health degree graduate Sherry Jernigan is no stranger to walking across the Murphy Center stage. She earned her MTSU bachelor’s degree in nutrition and wellness in 2020 and knew she wasn’t done with academia or with her alma mater.

“MTSU has been a big blessing for me,” said the Manchester, Tennessee, native, who received her degree from the College of Behavioral and Health Sciences, “(and) graduating with a master’s degree as a Latina is a huge deal. I am the first in my family with a college degree. My mother is my everything, and I plan to take care of her one day.”

Jernigan balanced her studies with a full-time job as an assistant property manager at an apartment complex and a graduate teaching assistant position in the Department of Health and Human Performance. That meant 60-hour weeks of work and studies that she said was difficult but worth the effort.

“My plan is to work in health care administration and to help give care to minorities who are underrepresented,” she said.

The close of Jernigan’s chapter at MTSU reminded her of what made the True Blue experience special, including “the wonderful professors who strive every day to teach you and the most wonderful, genuine friends that I’ve acquired as a graduate teaching assistant.”

“MTSU is all I have known the last several years,” she said, “but I’m ready for what is next, and my family will be there to cheer me on.”

Friends, families and supporters who couldn’t attend Saturday’s ceremonies in person were able to watch them free online at the university’s livestream pageas well as the MTSU YouTube channel and Facebook page.

True Blue TV will re-air the two-hour ceremonies Sunday, Dec. 11, at 9 a.m. and 2 p.m. Central and again on Saturday, Dec. 17, at 9 and 2 Central on cable and the website. The ceremonies will also be available on the True Blue TV On-Demand page at https://bit.ly/MTTrueBlueTVOnDemand and on Roku, Apple TV and Amazon Fire.

The official fall 2022 commencement program, listing all the graduates by college as well as providing more details on the event and speakers, is available at https://bit.ly/MTFall2022GradProgram.

A video with highlights from the day’s events is available above. Photos can be found at https://bit.ly/MTFall2022GradPhotos.

MTSU’s students and faculty will be on winter break until the spring 2023 semester begins Tuesday, Jan. 17. The university will be closed Friday, Dec. 23, through Monday, Jan. 2, for the winter holidays. Offices will reopen on Tuesday, Jan. 3.