MTSU President Sidney A. McPhee kicked off the university’s new academic year Thursday, Aug. 22, with a call to develop more ready-to-work graduates and begin work on bold ideas to increase success in, around and beyond the classroom.

McPhee’s remarks came during his traditional State of the University Address (click for full text) at the Fall Faculty Meeting inside Tucker Theatre. The annual gathering drew hundreds of new and returning faculty and staff, Board of Trustees members as well as local and state officials just ahead of the return of thousands of students for the start of classes Monday.

Thursday’s event also featured the presentation of the 2019 Career Achievement Award, the university’s top honor for faculty members, to longtime physics professor William Robertson, who was praised for his own research efforts and developing research program for undergraduate students.

With progress made in those areas, Quest 2025 “underscores the university’s core mission to produce graduates who are prepared to thrive professionally, committed to critical inquiry and lifelong learning, and engaged as civically, globally responsible citizens,” he said.

“We seek to create and sustain a learning environment where students, in joint intellectual pursuit with faculty, become responsible decision-makers and active participants in their own learning.”

The university, McPhee said, will “endeavor aggressively” to pursue three bold ideas in years ahead, some of which will require public-private partnerships, corporate investment and governmental support to fulfill:

• Leverage the future potential brought by the recently completed enhancements to Middle Tennessee Boulevard. This may include creating a “campus district” to bolster student experience and tourism by transforming the area surrounding the campus into “a vital and active educational, cultural and commercial district.”

• Expand on ready-to-work graduate success by seeking to build a business partnership hub closer to Nashville by developing a facility — strategically located near major corporate headquarters and large employers — that would offer programs and services that support career development, career advancement and further respond to business and industry demands for employee education.

• And aspire to establish a tradition of immersive learning by incorporating a high-impact learning experience into each major. 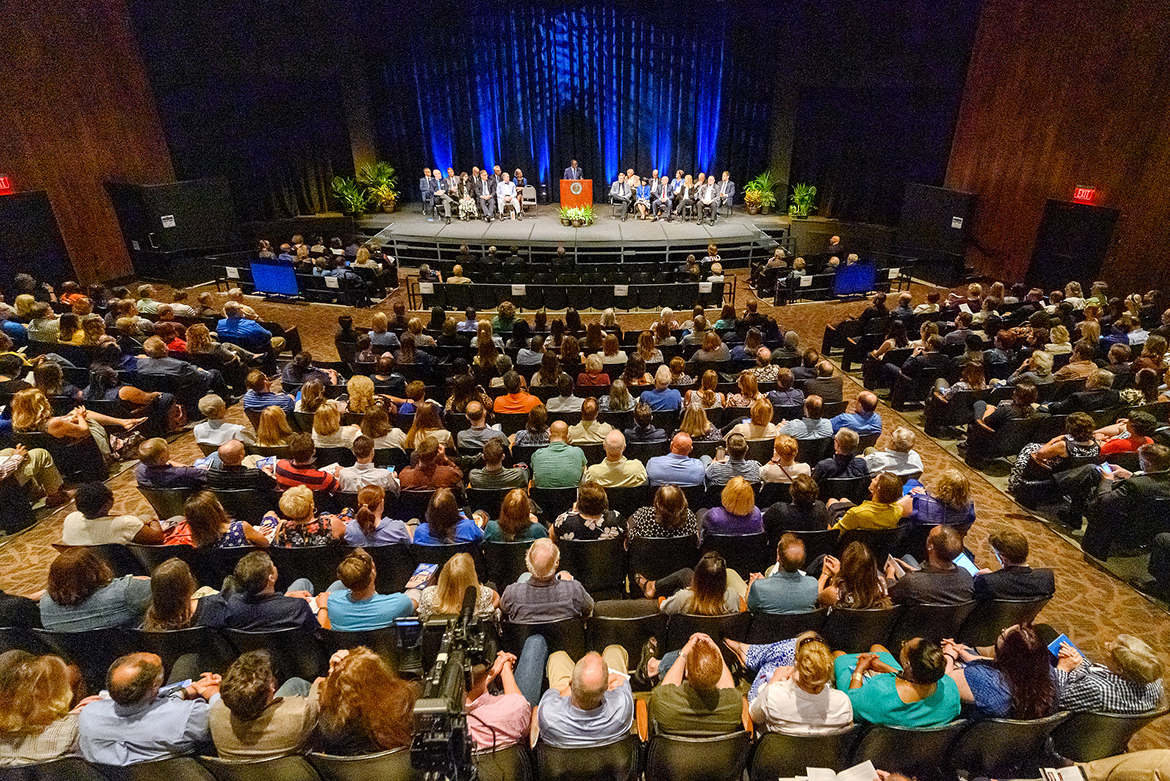 A large crowd looks on as MTSU President Sidney A. McPhee gives his annual State of the University Address during the Fall Faculty Meeting held Thursday, Aug. 22, inside Tucker Theatre. (MTSU photo by J. Intintoli)

McPhee encouraged faculty and staff to build on recent successes such as the university’s first-ever designation in The Princeton Review‘s list of “The Best 385 Colleges” in the nation for 2020 — only 13 percent of institutions made the list.

He also applauded efforts from across the university — from reforms to the general education curriculum to fundraising successes securing millions in private donations; and from nationally recognized academic achievement by student-athletes to expanding study-abroad opportunities for hundreds of MTSU students.

“This annual gathering provides an important opportunity for all of us to reconvene, reconnect, and reaffirm our commitment to lift up the lives of our students through education, and to use our scholarship, research and discovery to benefit and strengthen our communities,” he said.

While pledging to continue seeking ways to increase faculty and staff salaries, McPhee noted that the MTSU Board of Trustees approved a 2 percent salary pool for pay raises, with half of that going to a 1 percent across the board raise to begin the new academic year and the other 1 percent earmarked for market adjustments for certain positions that go into effect in January. And for the first time in 20 years, the university was able to give raises to adjunct faculty.

And though fall enrollment numbers are still preliminary, McPhee pointed to a 14.5 percent increase in new freshmen, an almost 5 percent jump in transfer students and overall numbers that are very comparable to the previous year.

Having already overseen more than $1 billion in campus improvements during his tenure, McPhee also noted that this year’s budget from Gov. Bill Lee that was approved by the state Legislature included funding for a new building for the School of Concrete and Construction Management.

The $31.6 million, 54,000-square-foot building will offer flexible instructional spaces and discipline-specific labs and is projected to be completed in late 2021. To make room for the facility, Abernathy and Ezell Halls on the east side of campus will be razed.

McPhee also pointed to construction progress on the College of Behavioral and Health Sciences’ new academic building that will house the Criminal Justice Administration, Psychology and Social Work departments.

The $39 million, 91,000-square-foot building is expected to be finished by Fall 2020, providing needed classroom, offices and lab spaces. 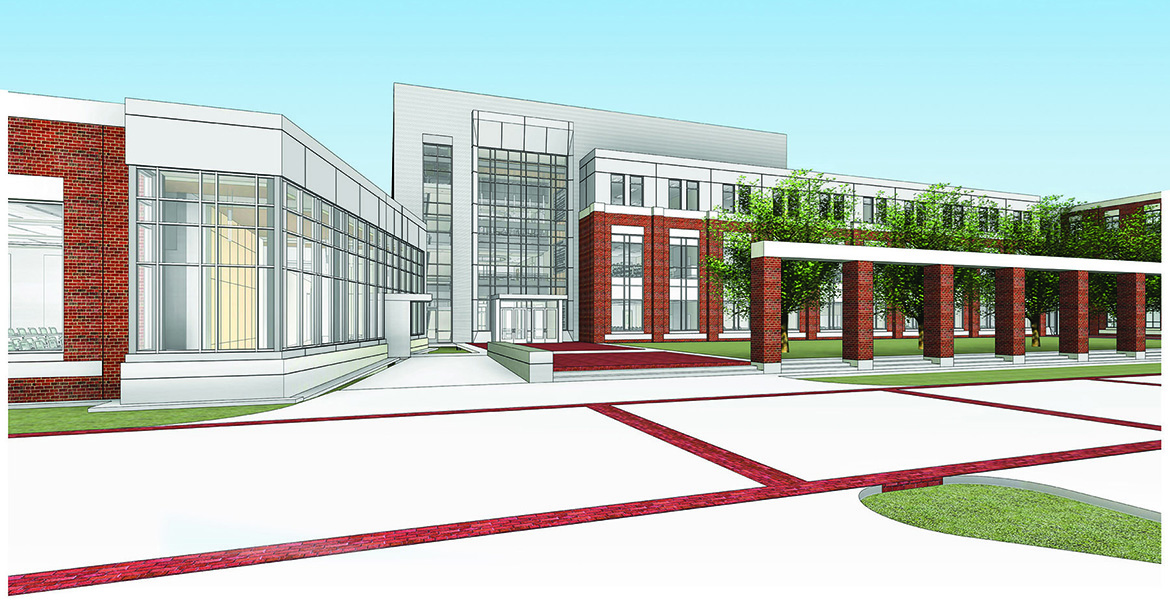 This architectural rendering by shows the exterior of the new academic building that will house the criminal justice, psychology and social work programs within the College of Behavioral and Health Sciences. The $39.6 million, 91,000-square-foot building will be located north of the Student Union Commons and is expected to be finished by fall 2020. (Courtesy of Bauer Askew Architecture PLLC)

Robertson accepted his award as part of the presentation of the 2019 MTSU Foundation Awards and Faculty Recognitions, which annually recognize, celebrate and reward university faculty members for their accomplishments in and outside the classroom.

University Provost Mark Byrnes noted that Robertson has been a professor of physics at MTSU since 1995 and is internationally recognized for his collaborations with undergraduate students on fast acoustic and electric pulse tunneling and his patents for optical sensors and acoustic lenses.

Calling the award “an immense honor,” Robertson recalled coming to MTSU years ago when the university placed much more emphasis on “being first and foremost a teaching school.” But he was still allowed to develop undergraduate research within the Department of Physics and Astronomy as other faculty members adjusted workloads to allow more flexibility for research-focused faculty like himself.

“I’ve benefitted from the sacrifice of my colleagues and also benefitted from their friendship, advice and support. I could not have achieved what I’ve done without their help. In a very real way, my success is their success,” he said. 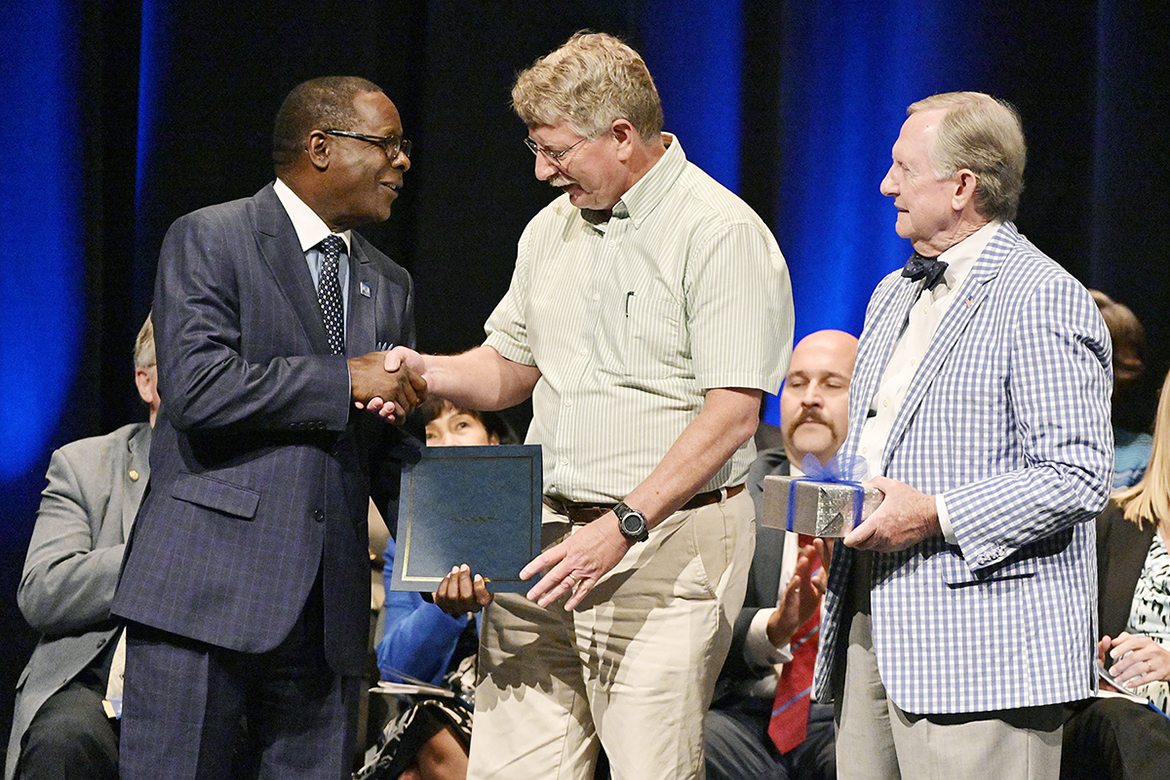 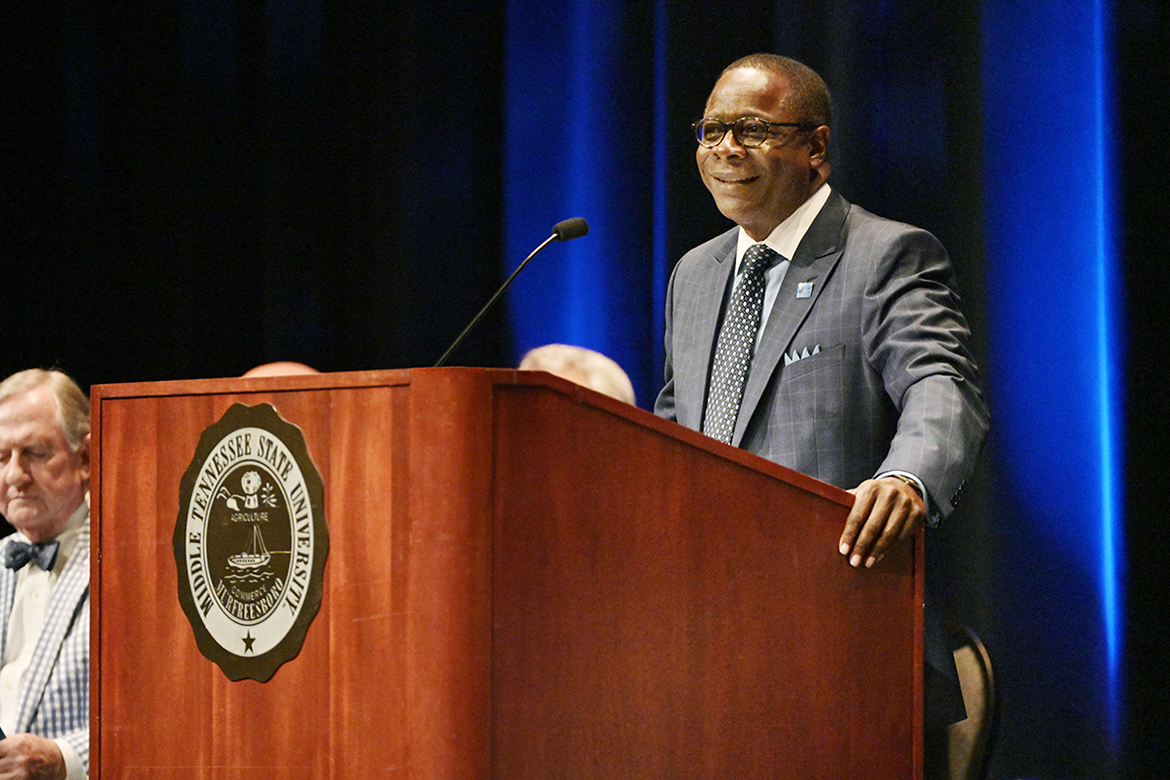