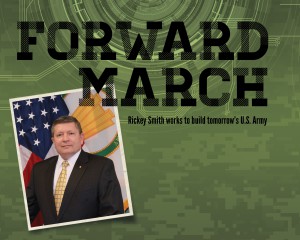 Rickey Smith (’78) draws wisdom from the past. He quotes great military strategists as easily as most of us recite our phone numbers. But as director of ARCIC Forward—the strategic engagement wing of the Army Capabilities Integration Center— he’s focused on the future, helping transform the U.S. Army into an ultramodern fighting force ready to battle on any front, whether subterranean or in cyberspace.

That’s no small task. Historically the least agile branch of the U.S. military, the Army has 980,000 active and reserve troops. The Department of Defense is reducing military spending as the war in Afghanistan draws down, yet far greater threats to American interests remain. Those threats are global, complex, and constantly changing, and as the logistical backbone of the joint military forces, the Army must be ready for them.

“Have you ever heard of building a bridge while walking on it?” Smith asks. “Welcome to my world.” 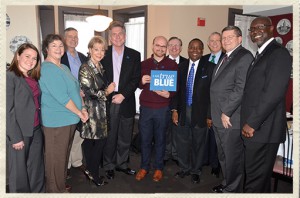 The center’s job is to plan how to train, structure, equip, and position the Army to thwart present and future enemies as quickly and efficiently as possible. Smith’s job is to convey that vision to those inside the Washington beltway. He works with Congress, administrative offices, and think tanks to help keep the ARCIC mission moving forward and to explain why, in a remote-control world, America’s land fighting force is more relevant than ever.

Before he retired from the U.S. Army and became civilian director of ARCIC Forward in 2009, Smith did “futures work” on the military side, helping oversee the most sweeping reorganization of combat operations since World War II. Now an even more dramatic modernization is underway, and Smith is helping shape a force facing limited funding but near-limitless combat scenarios.

“I don’t use the phrase ‘irregular warfare,’” he says. “It’s just warfare. What used to be conventional is now unconventional. That’s the chaotic dynamic we’re working in.” So while the Army has institutionalized the practice of learning from its mistakes (with, for example, the Center for Army Lessons Learned), its best weapon going forward might be adaptability.

Troops may fight the next big battle in one of the growing number of “megacities,” tracking a loosely organized enemy through sewers or high-rises. Or they might have to swap their Humvees for horses, using GPS to call in airstrikes, as they did in the mountains of Afghanistan. “Our challenge is we have to do these things as an away game anywhere on the globe,” says Smith.

He predicts that cyberspace will become more treacherous as hackers learn to disable military computers and redirect GPS units. (“That’s what we would do, so that’s we should expect our enemy to do. They’re not idiots.”) He also considers chemical and biological weapons credible threats.

“We’re facing an active, dynamic, resourceful adversary that doesn’t have the same legal or moral structure that we do,” he says. “How do we deal with that?”

ARCIC offers two answers: adaptation and innovation. The hoped-for result is a leaner, smarter, more flexible U.S. Army that leaders expect to have in place by 2025.

ARCIC helped shape new cyberspace operations units, including one focused on missile defense, as well as a “consequence management” formation to assess and contain damage from a weapon of mass destruction. The center has also increased the Army’s focus on biometrics and forensics and sees particular promise in human performance and material science research.

And then there’s technology that should make formations faster and more resilient: innovations such as bandages that cauterize wounds, uniforms that store solar power or a soldier’s own kinetic energy, “Iron Man” helmets with heads-up displays, and devices that pull water from air. “Some of these things are past the testing phase,” Smith says. “Now we’re assessing where we should put them in the force.”

Whether the question is where to station troops or what technology to buy, Smith says it all boils down to cost-benefit analysis—a perfect challenge for a former finance major.

Smith attended MTSU on a four-year ROTC scholarship, choosing his hometown school out of 350 options because he felt it offered him the best chance to succeed on his own merits. “Even with the growth of the University,” he says, “it remains a place where you can achieve your personal excellence, even if you didn’t come from a long line of college graduates, which I didn’t.”

Yet succeed he did.

At MTSU, Smith joined the riflery team and was cadet battalion commander. He also married his high-school sweetheart, Margaret Smith (’84). After graduating in 1978, he joined the Army as a field artillery officer, completing tours of duty in Germany and Korea. He earned an M.B.A. and a master’s in national security strategy. He participated in START treaty negotiations in Geneva and after 9/11 was a Department of Defense coordinating officer for disaster relief and homeland security before moving on to futures work.

All along the way, he says, he’s drawn on lessons he learned as a cadet at MTSU. “The notion of being able to examine problems, come up with courses of action, do a kind of cost-benefit analysis . . . that all stems from those early days.”

As ARCIC’s point person in Washington, Smith considers himself less an advocate than an educator, and those analytical skills are still critical. At a time when military decisions can boil down to numbers, he presents the cost of arbitrary change versus the benefit of restructuring the Army in an intellectually driven way.

“At the end of the day, the nation will have the army it wants to resource,” he says.

Central to ARCIC’s philosophy is the conviction that no unmanned system and no amount of remote firepower can replace the need for boots on the ground.

“Don’t get me wrong—I want the world’s greatest air force and navy,” Smith says. “But that won’t drive you to a strategic resolution . . . and by launching that bomb, you may have created ten adversaries you didn’t have before.”

With troops in more than 100 countries, the U.S. Army is positioned to deter war by addressing its underlying human causes, he says.

“Clausewitz said that war is the ultimate expression of politics. . . . The human aspect of military operations is about changing behavior. Lethal means—the battle, the firefight—that’s a last resort. If you really want to change behavior, you’ve got to start through engagement.”

Smith says human capital is the Army’s most precious commodity, and today’s soldiers come with fresh, invaluable skills: they are digital natives who find new ways to use technology, often write their own apps, and solve problems through crowdsourcing.

Then again, Smith says, some things haven’t changed since he was a cadet at MTSU. “We’ve got a lot more gee-whiz things now,” he says, “but strength of character, the Army values we embrace—those are enduring.”