From Literary Canon to Vampire Slaying

Welcome to the Future

From Literary Canon to Vampire Slaying

Dr. David Lavery is crafting a new pop canon, one Buffy at a time 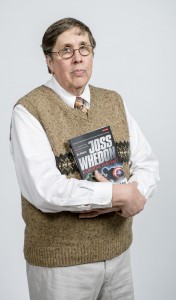 I’ve been asked a hundred times why I’m interested in Buffy, the Vampire Slayer,” says Dr. David Lavery, director of Graduate Studies in English at MTSU. “I say it’s because it makes me feel like my education wasn’t for nothing.”

Connecting the respected canon of literature to a TV show about vampires and a heroine slayer isn’t the typical self-reflection one might expect from a professor of English literature with curriculum vitae long enough to warrant an ISBN number. But Lavery isn’t typical.

Since 1978, when he earned his Ph.D. in English at the University of Florida, Lavery’s career trajectory, which began with a desire to focus on American literature and specialize in Native American literature, has taken a surprising detour out of the realm of the canon and into the uncharted waters of popular culture, particu­larly television studies. The first leg of that journey was his dissertation, which came out of a push to see a Federico Fellini film. Then, during an early stint at the University of Memphis as a professor of communica­tion and film studies, Lavery was asked to teach a class called TV and Culture.

“At first, I thought it was ridiculous, but I enjoyed it,” he said. Little did he know, but he was in the first group of scholars engaged in groundbreaking studies about TV and its impact on our culture.

Since arriving at MTSU in 1993, he has continued to break new ground, bridging the gap between pop culture and the canon.

“It’s exciting to teach at a school with such a comfort level,” Lavery says. “Here at MTSU, I can teach Wallace Stevens and then Joss Whedon,” the latter being the creator of Buffy, the director of recent box-office smash The Avengers, and other iconic shows and movies. (Lavery recently published a book titled Joss Whedon: A Creative Portrait.)

According to Lavery, the division between low and high culture is not as strong as it once was—or as people thought.

“As a graduate student, I used to hate TV,” he admits. “I thought it was Orwellian and would ruin our souls. I never pictured myself here, in this career. And I’m having fun.”

One promising aspect of this burgeoning area of study? The need for scholarly articles and books. Lavery created the first scholarly book devoted to an individual TV series, Twin Peaks.

“No one had thought of taking on a book about TV—and I certainly never anticipated being that person,” he says. Since that seminal work, Lavery has authored, coauthored, edited or coedited over 20 books and over 150 published essays, chapters, and reviews, including the aforementioned book-length biography of Whedon.

Lavery believes MTSU is a leader in the integration of pop culture and traditional English studies. He acknowledges that while English depart­ments have accepted film studies, many have not yet taken on TV, which he calls misguided.

“TV shows are like novels,” he says. “They cover a long narrative time, and they should be part of the canon. The canon will grow.”

For Lavery, it all starts with Buffy.

“I hated the movie, so I didn’t watch the show on TV,” Lavery admits. “Four years in, students wanted me to watch. They said, ‘It’s your kind of show!’ I finally watched it, and it changed my life. Those students changed my life.”

And what about Joss Whedon, around and about whom a good deal of Lavery’s work has been centered?

“Whedon is the champion out there for all of us out here who once thought we were losers,” he says.

Lavery boldly places Whedon studies as a natural complement to those of a better-known literary icon.

“Shakespeare . . . has kept English teachers busy for 400 years,” Lavery says. “Whedon . . . has tapped into how our imaginations work and changed TV. He has reached whole families and spoken in a language we understand. Like Shakespeare in his day, Whedon is one of us.”

Lavery is one of us, too. Tori Warenik, a former student of Lavery’s who received her master’s in English from MTSU in 2013, says she enrolled specifically to study under Lavery.

“I first met Dr. Lavery in 2010 at Slayage, a popular culture conference on Joss Whedon, which convenes every other year. When applying for graduate programs, I contacted Dr. Lavery, who volunteered some advice: ‘Go where you feel like you belong.’” (Lavery was a cofounder of the Slayage conference, and the Slayage Journal—each outgrowths of the Whedon Studies Association Lavery also cofounded.)

“Many people don’t get the opportunity I did to make a connection with someone so plugged in to his area of interest as well as to his legacy: his students,” Warenik says. “Though he has written and edited a veritable shelf of books and academic papers, Dr. Lavery wants his students to succeed in their chosen paths as he has, which in academia, is actually extraordinary.”

Warenik, now a high school English teacher in Florida, says she is excited to try to make those same types of connections with her own students.

What is next for David Lavery? His ambitions are many and varied. He certainly doesn’t want to be pigeonholed. He admits that he has always chafed at the “turf ” of academia.

“In my perfect world, the English Department and the Chemistry Department would teach together,” he says.

Lavery says he has enjoyed teaching in the Honors College and would like to teach an interdisciplinary course on the topic of creativity.

“Our Honors [program] does an incredible job of giving good students a chance to think outside the box,” he says, acknowledging that MTSU is the number-one target for the state’s best and brightest students.

In summer 2014, Lavery is teaching Special Topics in Popular Culture: James Tiptree, Jr. and Science Fiction—a graduate class. He is also finishing a book called Finale about the great television finales of all time.

“I’d like to write a book on Wallace Stevens,” Lavery says with a smile.

Find out more about MTSU’s English Department below: