'Nursing the Media': Listen to.. 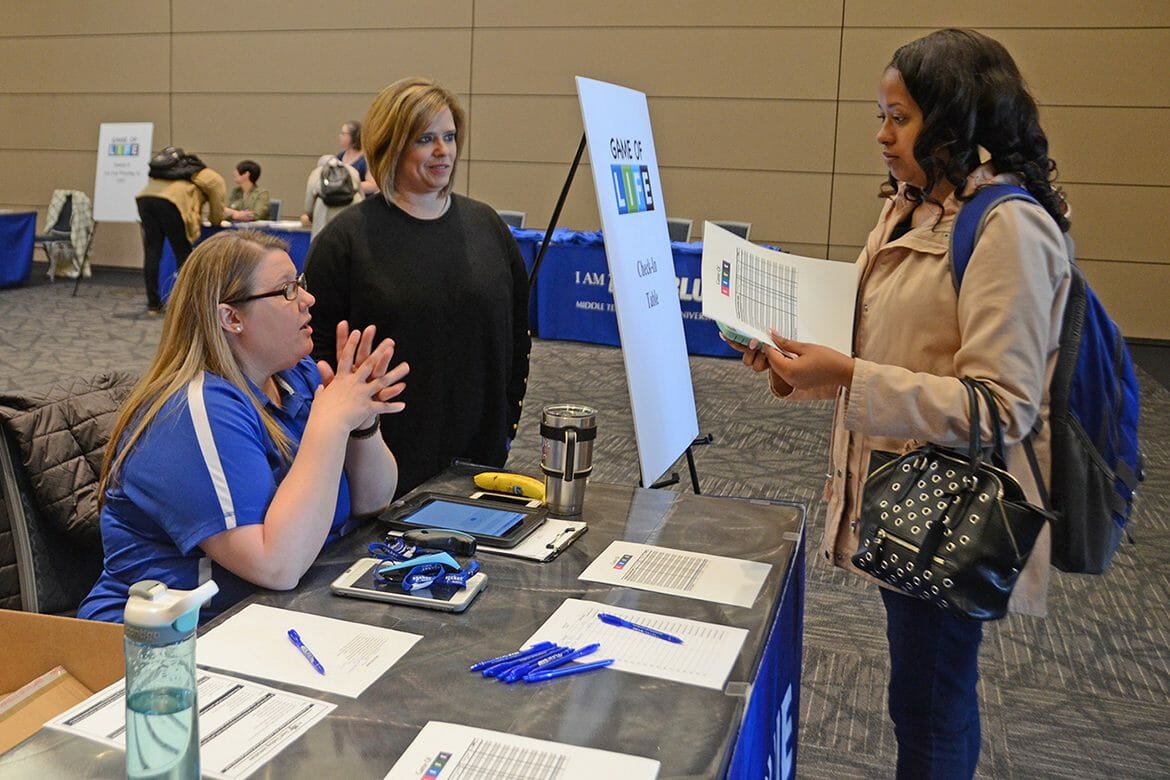 In honor of Financial Literacy Month, the Student Services and Admissions Center presented the inaugural “Game of Life” on Wednesday, April 5, in the Student Union Ballroom. MTSU students were able to project the cost of living based on the careers of their choosing.

Sponsored by MT One Stop, the event set up nine stations to give insight on factors including student loans, unexpected life events and many other financial components to think about before and after college.

More than 100 students selected their career path and salary and then visited each table to determine money lost or gained depending of their cost of living.

Opheim, a social work major, said her math professor encouraged her to participate in the event to grasp a better understanding of what’s to come after receiving her degree.

“It was fun … I was kind of stressed going into it thinking I was going to have to do it by myself, but everybody helped me through it,” Opheim said.

The Rockford, Illinois, native didn’t realize how important it is to budget for the rest of life, even while in college, until she went through the stations.

“I need to start saving money now so I don’t go broke,” she said.

Opheim noted that the experience was a real wake-up call, especially for someone who moved here from out of state.

“It’s tough having to buy every little thing for myself like laundry detergent and shampoo,” she said.

Each student who played received a “connection point,” free lunch and prizes, including a T-shirt or Connection Point button while supplies lasted. Connection Point is an MTSU student program that provides incentives and prizes as a reward for students who “connect” to the campus community through participation in student activities.

“It’s a great opportunity for students to learn how to budget,” said Kristen Russell, coordinator of outreach and support programs. “Even though MT One Stop put the event on, we honestly couldn’t have done it without the help of representatives from other departments.”

Jerrick Farmer, a junior audio production major from Memphis, Tenn., holds up the T-shirt he earned after completing the “Game of Life” financial literacy challenge set up April 5 in the Student Union Ballroom. (MTSU photo by Jayla Jackson)

MTSU freshman Justin McCrary has lived in Murfreesboro, Tennessee, his entire life. But he doesn’t plan on staying here after college, noting that the event filled him in on the financial challenges that await.

“My biggest fear would have to be moving into my own house, having to pay for my own bills and medical stuff, but this event helped me out big time,” McCrary said.

Laurie Witherow, associate vice provost in the Student Services and Admissions Center, believed it was important for students to receive information on economic literacy during each hands-on activity.

“It’s definitely a culminating activity to have them start thinking about what everything is going to cost after they leave this little bit of a bubble, which is higher education,” Witherow said.

The MT One Stop provides services in the areas of financial aid, course registration, tuition and billing and transcripts. It is located in the Student Services and Admissions Center.

Shatayia Wilson, right, an MTSU sophomore social work major from Knoxville, Tenn., checks in to the “Game of Life” financial literacy challenge April 5 in the Student Union Ballroom. At left, seated, is Kristen Russell, coordinator of outreach and support programs in MT One Stop, and Jackie Victory, director of Student Organizations and Service. (MTSU photo by Jayla Jackson)