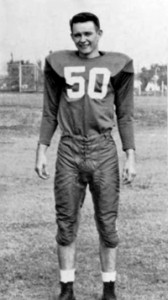 Legendary MTSU coach Charles “Bubber” Murphy once called Gerald “Mama” Johnson (’54) the best athlete he ever coached at MTSU.  Among MTSU’s last three-sport standouts, Johnson particularly excelled at baseball, hitting, .369 in 1950.  An end in football, a forward in basketball, and a first baseman in baseball, Johnson went on to become a coaching legend himself.  The Franklin resident died Nov. 14, 2010, at the age of 79 from complications of Alzheimer’s.

A graduate of Battle Ground Academy and MTSU, Johnson served in the Marine Corps and went on to earn a master’s degree before beginning his legendary teaching and coaching career -one marked by his drill instructor coaching style.  He is a member of the Hall of Fame at both MTSU and BGA.  His career included two Tennessean Coach of the Year Awards, a 1980 baseball state championship, induction into the Nashville Amateur Baseball Hall of Fame, and the College Hall of Fame’s Roy Kramer Contribution to Football Award.

The list of high school athletes and coaches throughout Nashville and Middle Tennessee who were influenced by Coach Johnson is a long one.  A favorite quote? “You’re either moving forward or falling back; you’re never standing still.”