“I gave my two weeks’ notice to the artist I worked with at the time for the chance to get the Blake Shelton gig, no guarantee,” Tackett said. “My first show was with no rehearsal, and if I hadn’t done well, I would have been without a job!”

Thankfully, Tackett’s performance passed muster. Most recently, he wrapped up playing in Shelton’s Friends and Heroes Tour at the beginning of October.

A Kentucky-native, Tackett knew he was not done learning despite his years of real-world, hands-on experience. To stay prepared for his future in the ever-changing music industry, he began the master’s degree program at the MTSU School of Music, with an emphasis in jazz studies, in spring 2021. 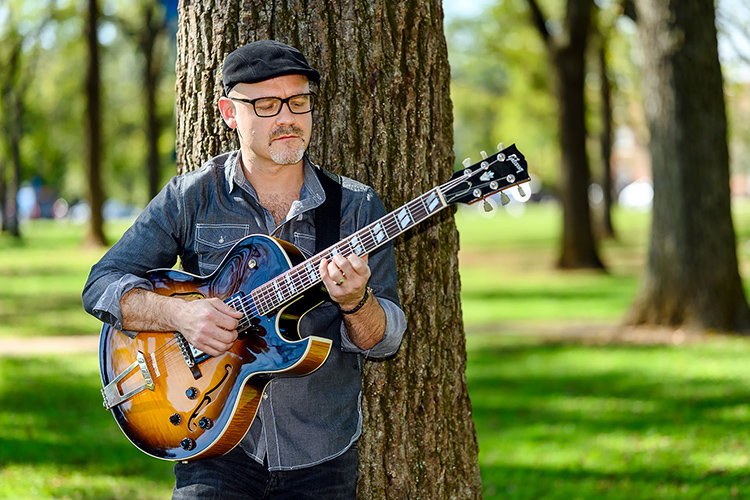 Professional guitarist and student Beau Tackett, a student in the Master of Music program, picks his guitar in Walnut Grove. (MTSU photo by J. Intintoli)

“I heard that the (MTSU) jazz program was a legit program,” Tackett said. “(Plus) I had taken a class from Chip Henderson who is the jazz guitar instructor. I knew I would be studying with him. I was impressed by his knowledge in the genre and his playing…. It’s great so far.”

The Master of Music program has seven different specializations, such as the jazz studies focus, including collaborative piano, conducting, composition, musicology, performance, and education, which has a fully online option. 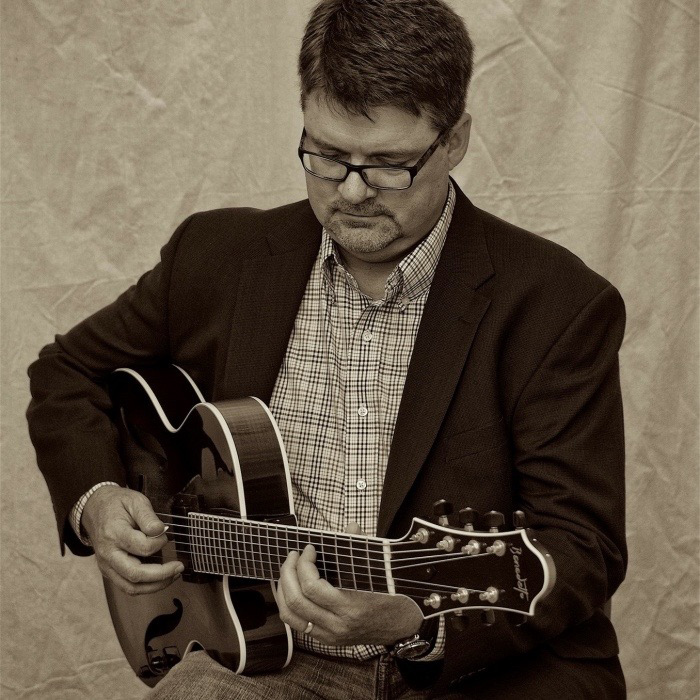 “I had long discussions with both of them over the course of months, to see if this degree path would truly be a good fit for them,” Henderson said. “In an average year we may hear from a few professional musicians interested in the graduate program; but the pandemic (along with the shutdown of touring and performances) gave many of these professional musicians a chance to look into continuing their education during the shutdown. There is a lot of front-end research involved; it’s not a snap decision.

“Once they decided it fit with their schedules, finances and needs, we spent months talking about the degree and the expectations that would be placed on them. In the end, we both knew this degree was something they could do that would help prepare them for the next phase of their careers. 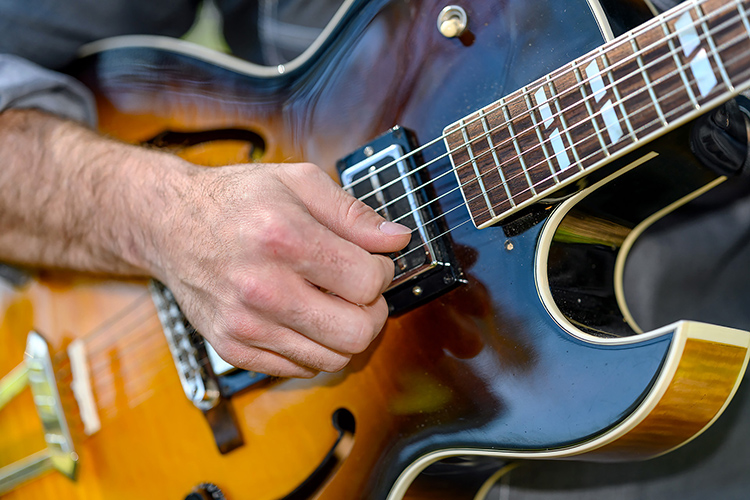 This closeup shot shows professional guitarist and student Beau Tackett, a student in the Master of Music program, picking his guitar in Walnut Grove. (MTSU photo by J. Intintoli)

“And,” Henderson added, “It’s mutual. They share their vast experience with their peers and undergraduates and act as mentors, which adds to everyone’s experience.”

The program has helped further solidify Tackett’s passion for teaching at the university level that he wanted to pursue further.

“COVID kind of highlighted that (passion) with the halt of the touring and the live music,” he said. “I know that having a master’s degree can only benefit me in all areas of teaching at the next level, and I’m also thinking down the road when it’s time for an old man like myself to get off the tour bus…. I want to have something for the future.”

“Becoming a better jazz musician (in graduate school) makes me a better musician in general and that spills over into my day job as well side gigs and recording opportunities,” he said.

“Knowledge is power, and a musician should always be getting outside their comfort zone in order to grow. That happens here for me.”

Like Tackett, Adam Davis, another graduate music student in the jazz program, decided to return to school after years of an ongoing, successful music career. 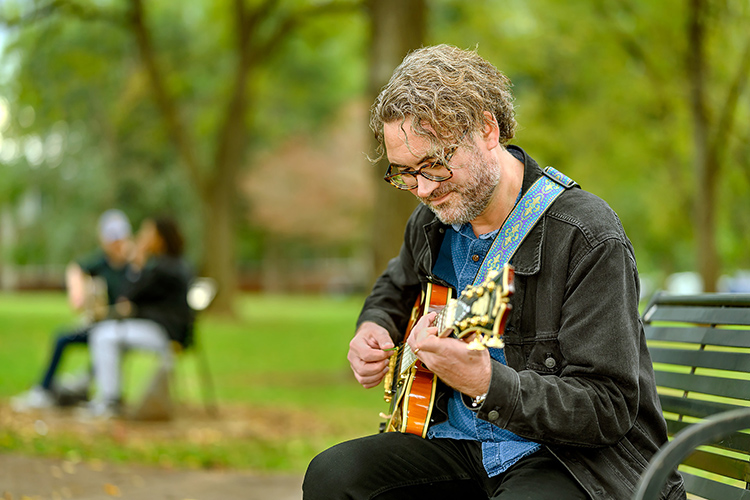 “I’m the father of three small children, so I’m hoping to increase the number of different environments that I can teach in,” Davis said. “A graduate degree can only help with all that. And of course, I’m always trying to improve as a musician, and there are many great faculty members at MTSU to help me along that path.”

Originally from Indiana, Davis was touring around Philadelphia when he decided to take a chance and move to Nashville in 2009.

“I came to Nashville just to explore the music scene and see if I was a fit,” Davis said.

Davis did prove to be a good fit — he worked for years as country singer Sturgill Simpson’s guitarist and with other musicians. 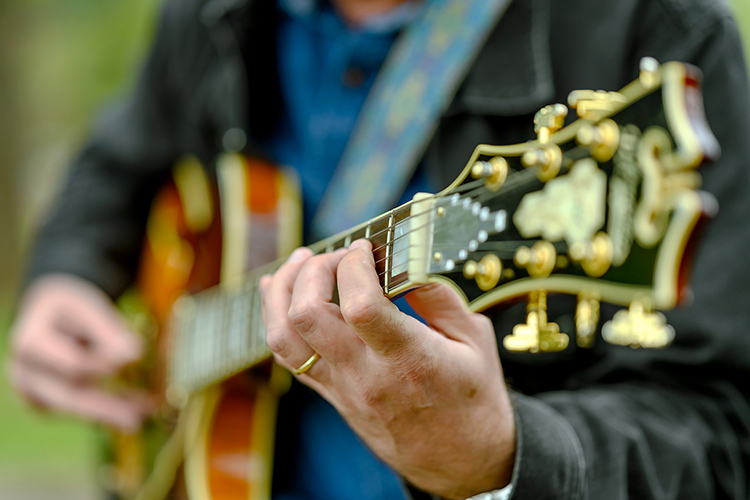 He was also already familiar with the caliber of Blue Raider education before starting graduate classes this fall.

“I finished my undergraduate degree at MTSU, so I was well-aware of the quality of the program,” he said. “For what I want to do, it’s by far the best choice in the Nashville area.

“When you’re surrounded by people who are not only great teachers but are deeply experienced in their profession, it can only make you better.”

For more information on the School of Music, visit the website https://mtsu.edu/music. 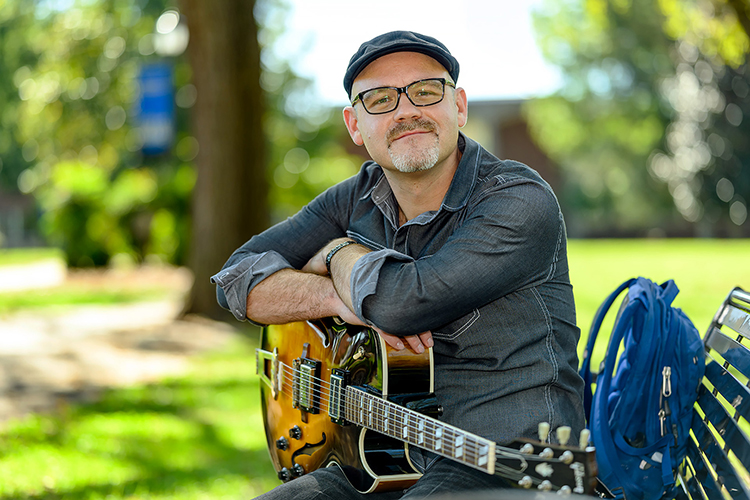 Professional guitarist and student Beau Tackett, a student in the Master of Music program, poses for a photo in Walnut Grove on the MTSU campus. (MTSU photo by J. Intintoli) 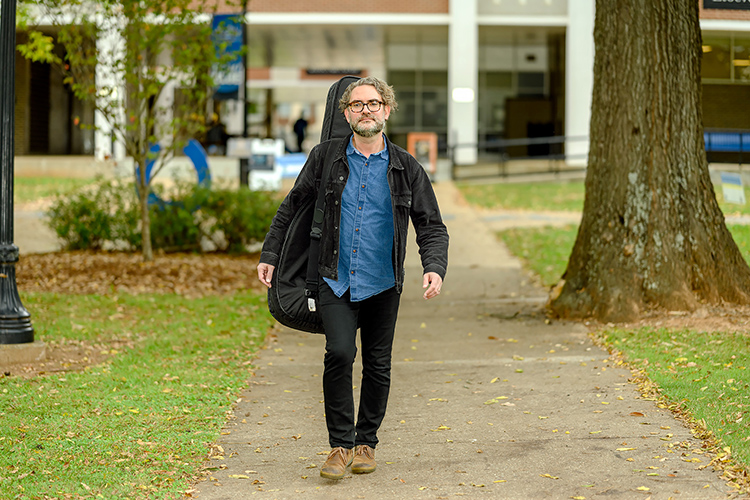 Professional musician and returning student Adam Davis, who’s studying jazz in MTSU’s Master of Music program, walks down the sidewalk in Walnut Grove from Peck Hall with his guitar during the fall 2021 semester. (MTSU photo by J. Intintoli)