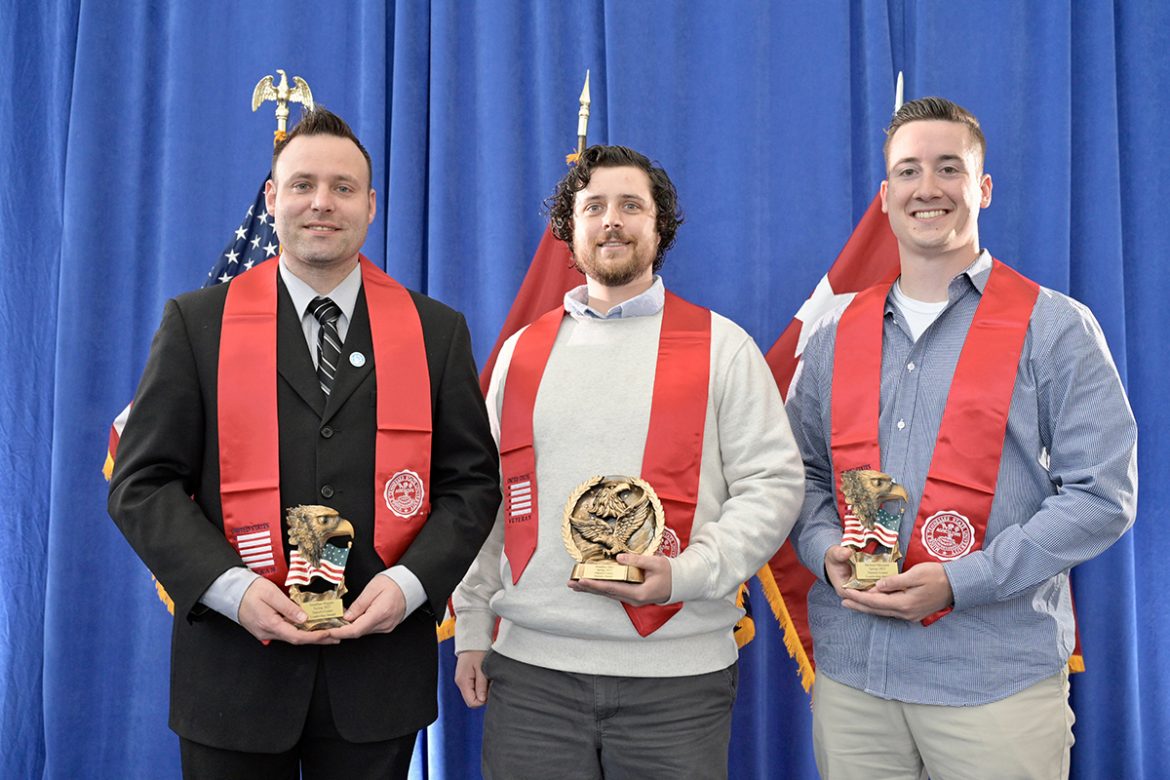 In a room full of fellow graduating MTSU student veterans receiving special red stoles Wednesday, April 27, for the upcoming spring commencement ceremonies, Tatyana Brasswell’s story played out differently than all the others.

Dozens of student veterans were recognized by top Middle Tennessee State University officials in the ceremony in the Miller Education Center second-floor atrium on Bell Street. They have not only served their country or will continue doing so, but have successfully completed their academic studies while awaiting their future challenges. 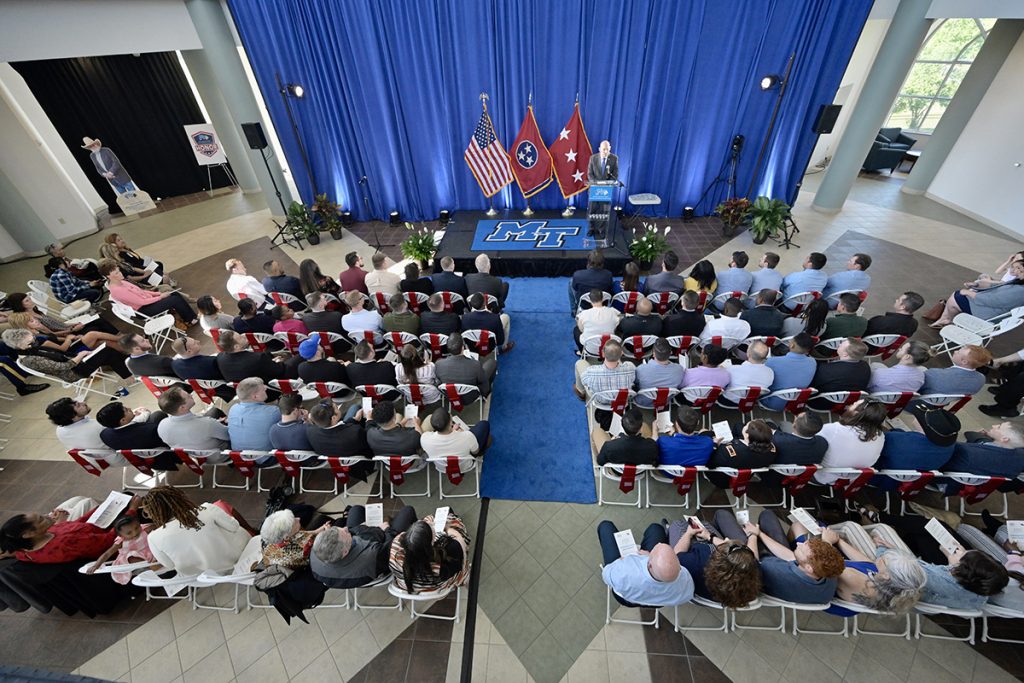 The Graduating Veterans Stole Ceremony Wednesday, April 27, in the Miller Education Center’s second-floor atrium drew nearly 65 student veterans who are scheduled to graduate from MTSU on May 7 in Murphy Center. Nearly 120 student veterans will be graduating. (MTSU photo by Andy Heidt)

Three graduation ceremonies will be held at 9 a.m., 1:30 p.m. and 6 p.m. Central Saturday, May 7, in Murphy Center. Nearly 120 student veterans will graduate, with 64 attending Wednesday’s stole ceremony. All will earn degrees from a variety of MTSU programs.

“You represent the armed forces and spouses of the armed forces of the United States of America,” said Keith M. Huber, senior adviser for veterans and leadership initiatives and a retired U.S. Army lieutenant general who served nearly 40 years in the military. “Embrace that responsibility.”

Five months from graduating from MTSU, Brasswell found herself in a quandary. Her looming assignment as a U.S. Air Force staff sergeant meant a six-month stint this year replacing deployed personnel in the 164th Air Lift Wing in her hometown of Memphis, Tennessee.

Brasswell’s education appeared to be on hold. Then, suddenly things worked out, but she had missed the registration deadline. This created another problem: She lost crucial funding she needed to pay for her final semester. She reached out to mentor Hilary Miller, director of the Charlie and Hazel Daniels Veterans and Military Family Center. 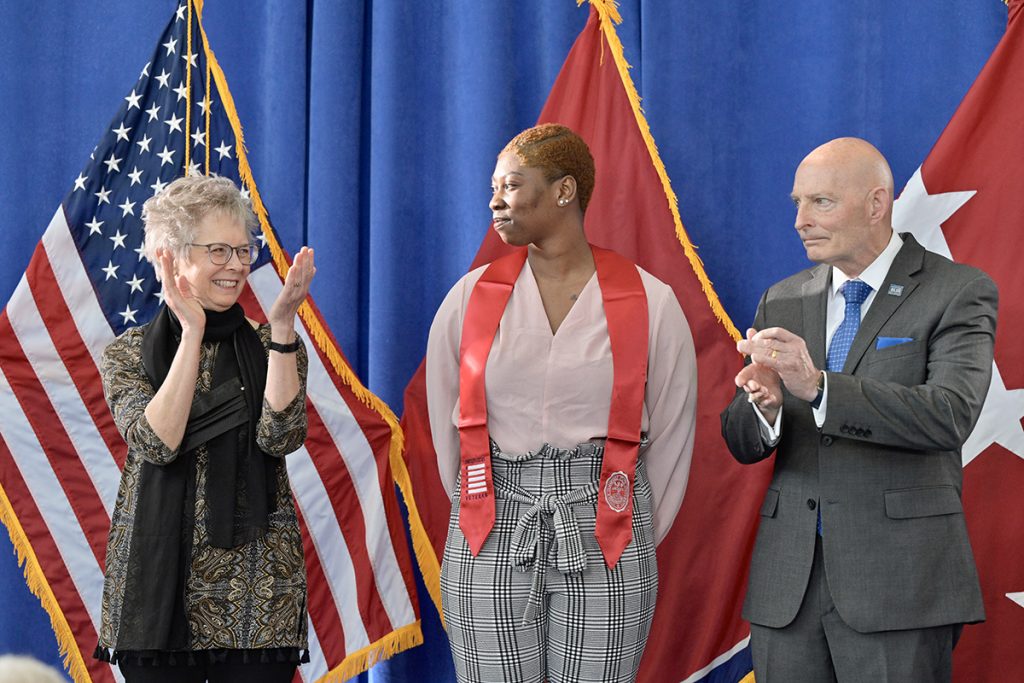 MTSU’s Deb Sells, left, vice president of Student Affairs, and Keith M. Huber, senior adviser for veterans and leadership initiatives, show their approval after Sells shared how Tatyana Brasswell had overcome obstacles and became the first recipient of the Avery King Memorial Scholarship this semester. On Wednesday, April 27, at the Miller Education Center, Brasswell and nearly 65 others were recognized with red stoles to wear at commencement in May. (MTSU photo by Andy Heidt)

“Dr. Miller said she could not make any promises, but she stepped in and saved the day,” Brasswell said. “There was an obstacle in the road I was able to overcome and achieve my goal (graduating). This scholarship shows they believed in me. I honestly wouldn’t be walking across the stage in May if not for this.”

Brasswell plans to graduate with a degree in leisure sport and tourism studies and an entrepreneurship minor. She plans to extend her Air Force commitment, but eventually wants to pursue a career working for a professional sports team. She has networked with the NHL Nashville Predators.

King, who died Sept. 22, 2021, was represented at the event by wife, Lynda King, and daughter, Amber King. He was HCA military affairs program manager and Air Force veteran.

“This means everything,” Lynda King said. “Avery absolutely loved working for HCA and he loved being a veteran, and being able to help veterans through HCA was the highlight of his life. If he knew how much he was helping someone like this, it’s the biggest blessing we’ve ever had.”

HCA pledged $25,000 to start the scholarship, which may be used to supplement educational costs or as a one-time grant for emergency needs. To learn more, contact Miller at Hilary.Miller@mtsu.edu. 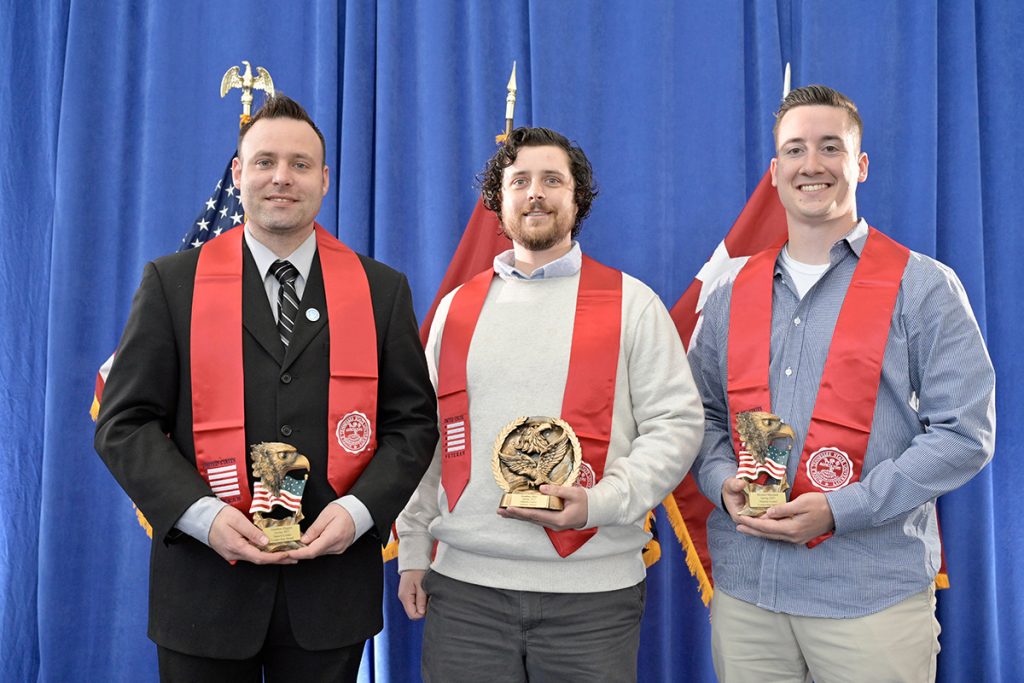 Deb Sells, vice president for Student Affairs and vice provost for Enrollment and Academic Services, told the honorees and their families MTSU “is so blessed to have a group like you” be a contributing force on campus.

Then, she recognized three recipients of annual awards. They included:

• Jon Allen, 33, of Columbia, Tennessee, winner of the Daniels Center/Journey Award, left the U.S. Marines with the rank of corporal.

The Columbia, Tennessee, resident said “this award means a lot. Coming from everything I’ve come from, there’s people that I need to live for that aren’t with us and just knowing I came in — I’ve been a member of SGA, the senate for two years and trying to step up and help people outside of a classroom as well as inside on this campus, it means a lot to get recognition for all that.”

“It means the world,” Higgins said. “I have catered to veterans for the past two year. I love ’em. They’re my lifeline just as much as I am their lifeline. I couldn’t do it without them. This (award) is for them.”

• Michael Maynard, 26, of Pleasant View, Tennessee, and formerly from Plymouth, Massachusetts, will continue serving in the U.S. Army in supply chain management. He also received the Daniels Center Leadership Award.

“It’s a privilege and an honor,” said Maynard. “The reason I came to MTSU was to better my leadership and mentorship for soldiers. I love training and mentoring soldiers, so to get an award that resembles leadership is beyond a privilege to me. It means a lot.” 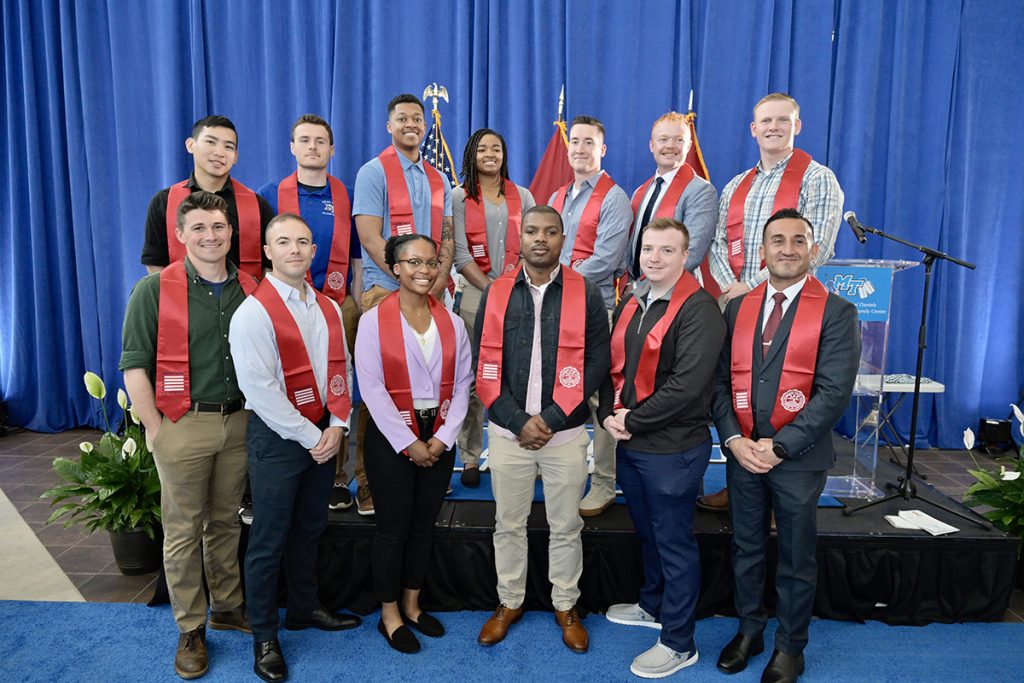 The Graduating Veterans Stole Ceremony Wednesday, April 27, in the Miller Education Center’s second-floor atrium included 13 Military Science ROTC cadets. They will be commissioned May 14 outside the Tom H. Jackson Building near the MTSU Veterans Memorial. (MTSU photo by Andy Heidt)