MTSU returns to the Grammys after COVID hiatus [+V...

MTSU returns to the Grammys after COVID hiatus [+VIDEO]

MTSU President Sidney A. McPhee joined faculty, students and administrators from the colleges of Media and Entertainment and Liberal Arts in Las Vegas, Nevada, for the 64th annual Grammy Awards, where the rescheduled and relocated ceremony will take place Sunday, April 3. 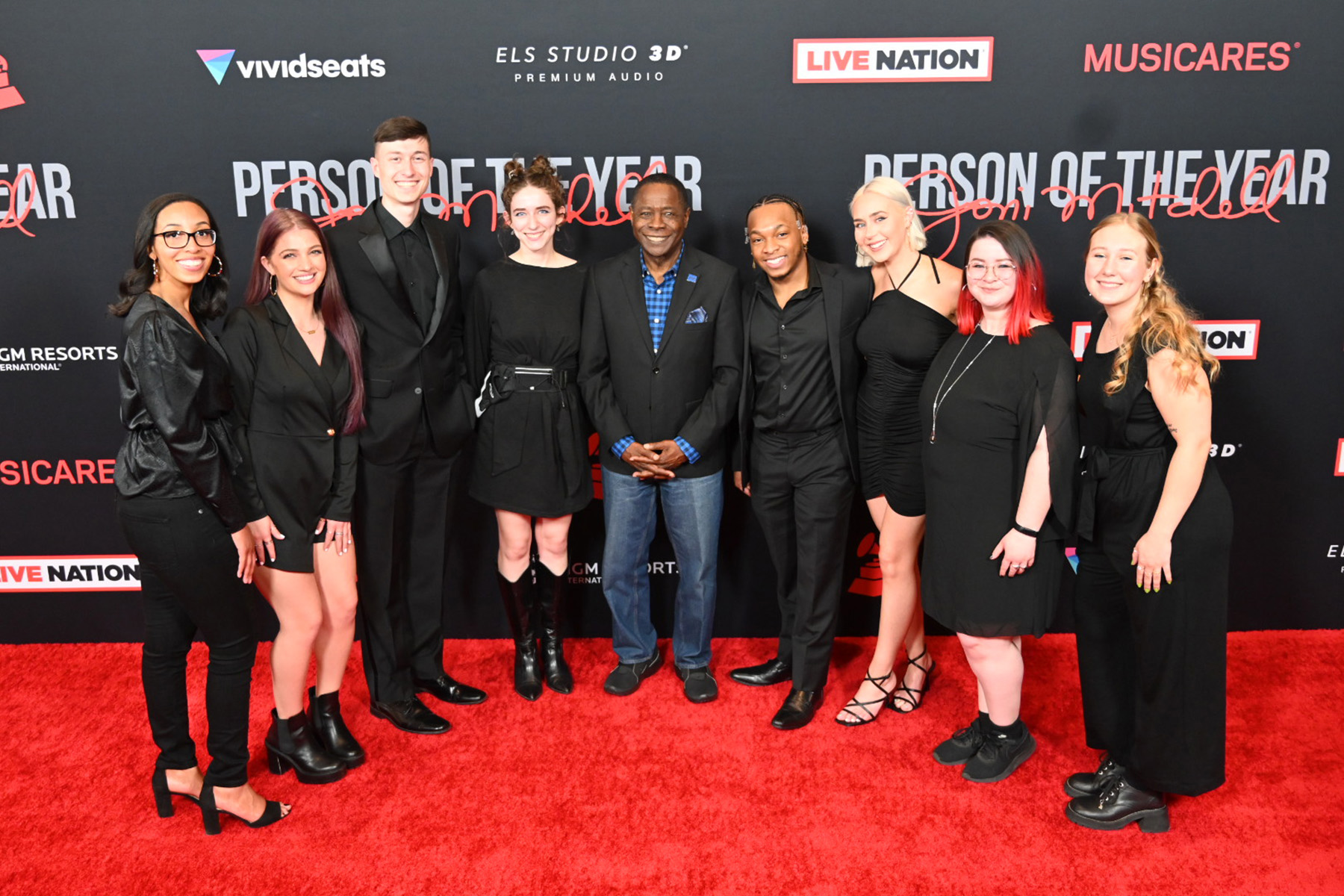 MTSU President Sidney A. McPhee, center, stands with students and recent alumni from the university’s Department of Recording Industry on the red carpet before Friday night’s MusiCares fundraiser at the site of the 2022 Grammy Awards in Las Vegas. (MTSU Photo by Andrew Oppmann)

COVID-19 concerns in 2021 broke MTSU’s seven-year streak of hosting Grammy site events and lining up student experiences. The pandemic also delayed the 2022 event by three months, forcing it away from Los Angeles for an open venue.

“I’m pleased that our annual recognition of our alumni Grammy nominees and this amazing student learning experience is back on track,” McPhee said. “It underscores our standing as a premier and accomplished music business institution.”

At least nine alumni were nominated for Grammys this year, in categories ranging from country to pop to Latin music to bluegrass to gospel. They will be recognized by the university at an MTSU Alumni Association gathering Saturday in Las Vegas.

Students Cole Arn, Kevon Cole, Breanna Beahler, Jolie Harper and Sam Long helped MusiCares ready the room for a reception and silent auction, followed by a dinner and tribute concert honoring Mitchell’s impact on the music industry and the inspiration she has provided to artists over the years. 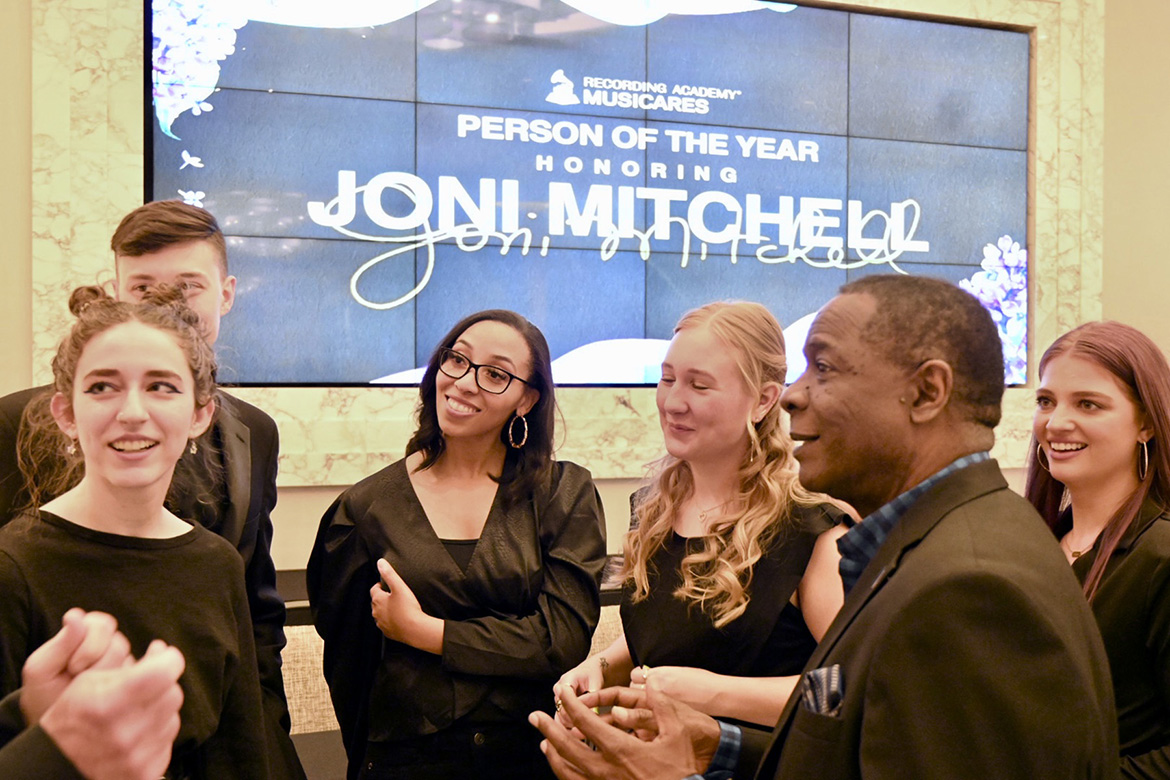 MTSU President Sidney A. McPhee, second from right, chats with students and recent alumni from the university’s College of Media and Entertainment before Friday night’s MusiCares fundraiser at the site of the 2022 Grammy Awards in Las Vegas (MTSU Photo by Andrew Oppmann). 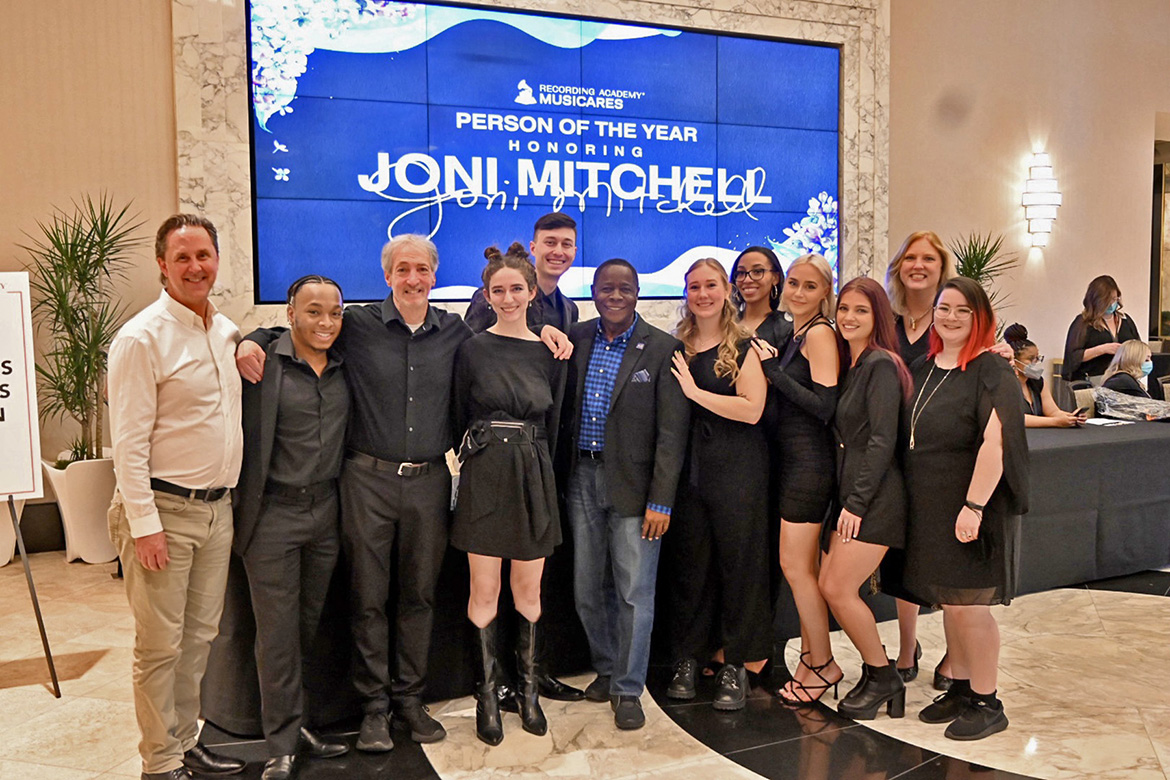 MTSU President Sidney A. McPhee, center, stands with faculty, students and recent alumni from the university’s College of Media and Entertainment at the entrance of Friday night’s MusiCares fundraiser at the site of the 2022 Grammy Awards in Las Vegas. (MTSU Photo by Andrew Oppmann)

“Getting to go on this trip is the opportunity of a lifetime,” said Harper, a senior majoring in music business from Nashville, Tennessee. “I’m so thankful that MTSU has provided me with the chance to meet industry professionals, see Las Vegas and have an amazing experience with my peers — all at the same time.”

Beahler, a junior majoring in music business from Cosby, Missouri, said she was “so thrilled and thankful to be a part of this experience. I know I am going to learn so much on this trip.”

“Experiences like these help our students better understand the inner workings of major entertainment events,” Keel said. “We show them how many of the elements for the industry’s biggest event come together and how things get done.”

National news outlets in 2019 began calling MTSU a “Grammy-winner factory” in the wake of the multiple nominations and wins by alumni, students and staffers from Media and Entertainment’s Department of Recording Industry and Liberal Arts’ School of Music. The university routinely makes Billboard’s list of top music business schools

MTSU alumni, former or current students, and faculty have been a part of more than 125 Grammy nominations in the last two decades. After the 2021 ceremony last March, the number of MTSU-connected Grammy winners since 2001 has risen to 15 with a total of 37 Grammys, including nine repeat recipients.