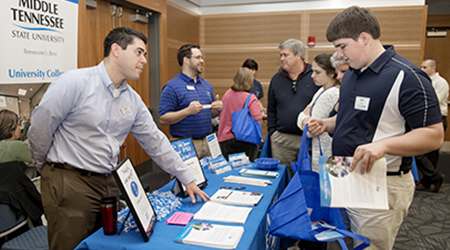 From as far away as Missouri and New York City, a record number of people attended the fourth annual University Honors College Presidents Day Open House on Feb. 18.

The open house, which has become a campus tradition, welcomes prospective students — from freshmen to high school seniors — to gain a glimpse of campus on a day when most of the younger students are out for a school holiday. Family members joined them on the visit, resulting in a record 375 people in attendance.

For Kaleb King, who is expected to sign to play baseball for the Blue Raiders and who already is a 2013-14 Honors College Buchanan Fellow, this trip marked his third visit to campus.

“I found the Honors College through Coach (Jim) McGuire when I came for a visit,” said King, a pitcher and outfielder for St. Louis University High.

He called the Paul W. Martin Sr. Honors Building “a really nice building. I like how the Honors College classes are small.”

King, who was visiting with his father, Greg King, said he is still undecided on a major.

Shelley Cobb of Antioch, Tenn., also a 2013-14 Buchanan Fellow, said she plans to major in biology with a pre-med track.

“This has been really good,” said Cobb, s senior at Hume-Fogg Academic High School in Nashville. “I went to the Buchanan breakfast, which was real personalized. I talked to a current Buchanan Fellow.”

Cobb, who was visiting with her parents, 1984 MTSU alumni Carol and Gregory Cobb, said the visit allowed her “to get to know a lot about the school I didn’t know.”

Her new opportunities included learning more about the Buchanan Fellowship and the advantages of the Honors College and being able to study abroad.

Aiman Farooqui, a senior at Cambridge High School in Milton, Ga., said he plans to study pre-engineering with a mechanical engineering emphasis in college. He and his mother, Iffat, attended the open house and were awaiting his father’s arrival.

Since his father, Hassan Farooqui, has taken a job in Franklin, Tenn., Aiman Farooqui said he is “very likely to come here (to attend MTSU). I find the school very interesting. It has what I need, plus it is close to where my dad works.”

Knoxville Catholic junior Bailey Poteet, who said she plans to be a psychology major, made MTSU her first college visit with her parents, Rhae Nell and Steve Poteet.

“I like it,” she said of the campus visit. “I like how there’s people you can talk to in the departments.”

Eight other students came to visit MTSU with New York City-based Shiloh, a not-for-profit Christian organization that helps at-risk youth. They are touring other university campuses too.

Clippard said the Presidents Day schedule provided a mixture of information about MTSU, educational events and fun activities. Guests ate lunch and were able to tour campus housing, the College of Mass Communication, the Department of Aerospace’s Air Traffic Control Training and Research Facility and the School of Nursing facilities.

Other open-house activities included a “mad science” event, a mock trial demonstration and tours of the Honors College.

For more information about visiting the University Honors College, contact Laura.Clippard@mtsu.edu or call 615-898-5464.