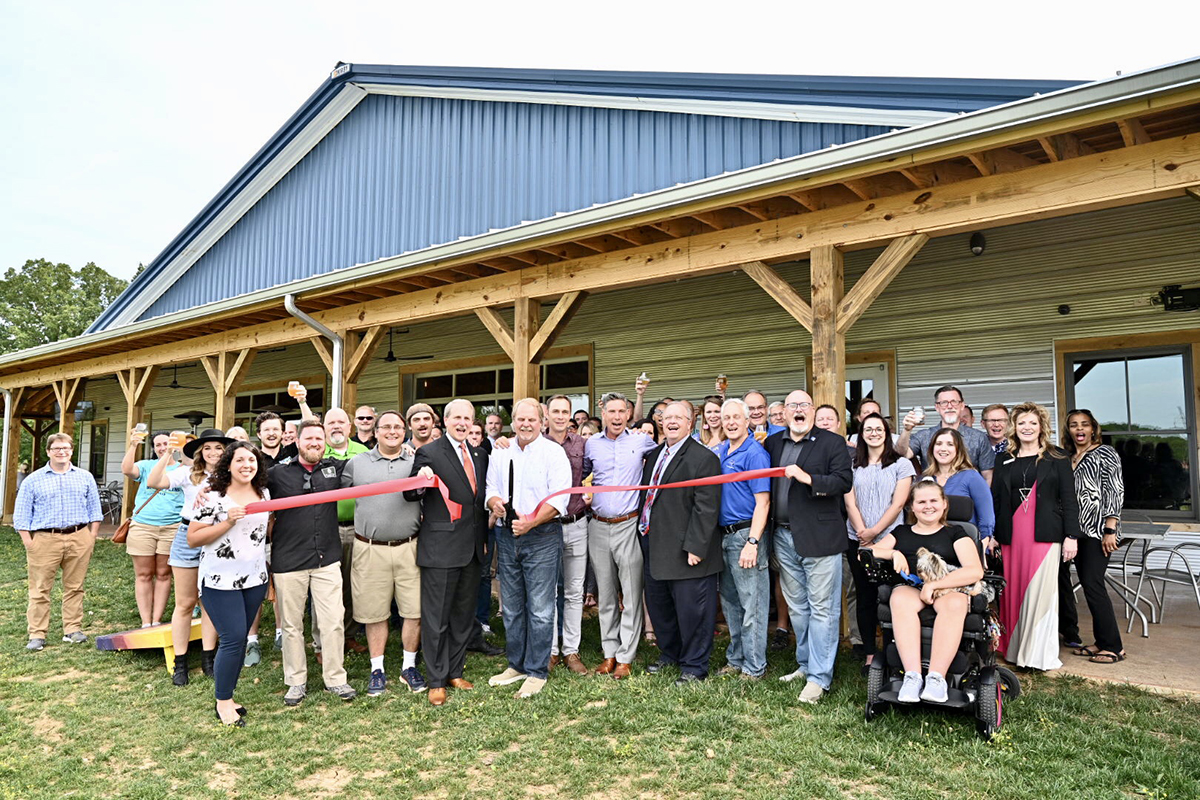 Invited guests, MTSU staff and administrators and Hop Springs owners and personnel participate in the Rutherford County Chamber of Commerce ribbon-cutting Thursday, May 23, to celebrate the grand opening of the facility and partnership with MTSU fermentation science. (MTSU photo by J. Intintoli)

The event included music, food and beverages and tours of the new analytical and fermentation science labs in Hop Springs’ building space.

The MTSU degree program, which recently graduated its first class, has gained interest from prospective students from all across the country. The recent grads had internships with Yoplait yogurt, Hop Springs and other companies.

Jones, an MTSU School of Agriculture alumnus, and business partner Derrick Morse, opened their venture and partnered with MTSU to provide lab space in the large facility that features soon-to-open Steel Barrel Brewery.

It’s a merging of academics and agritourism.

“We have an analytical lab as well as a sensory lab,” Johnston told the audience. “The analytical lab is for traditional chemical analysis of foods and other products and the sensory lab can be used for almost anything anyone wants to evaluate. And, believe me, I am grateful to have those facilities.” 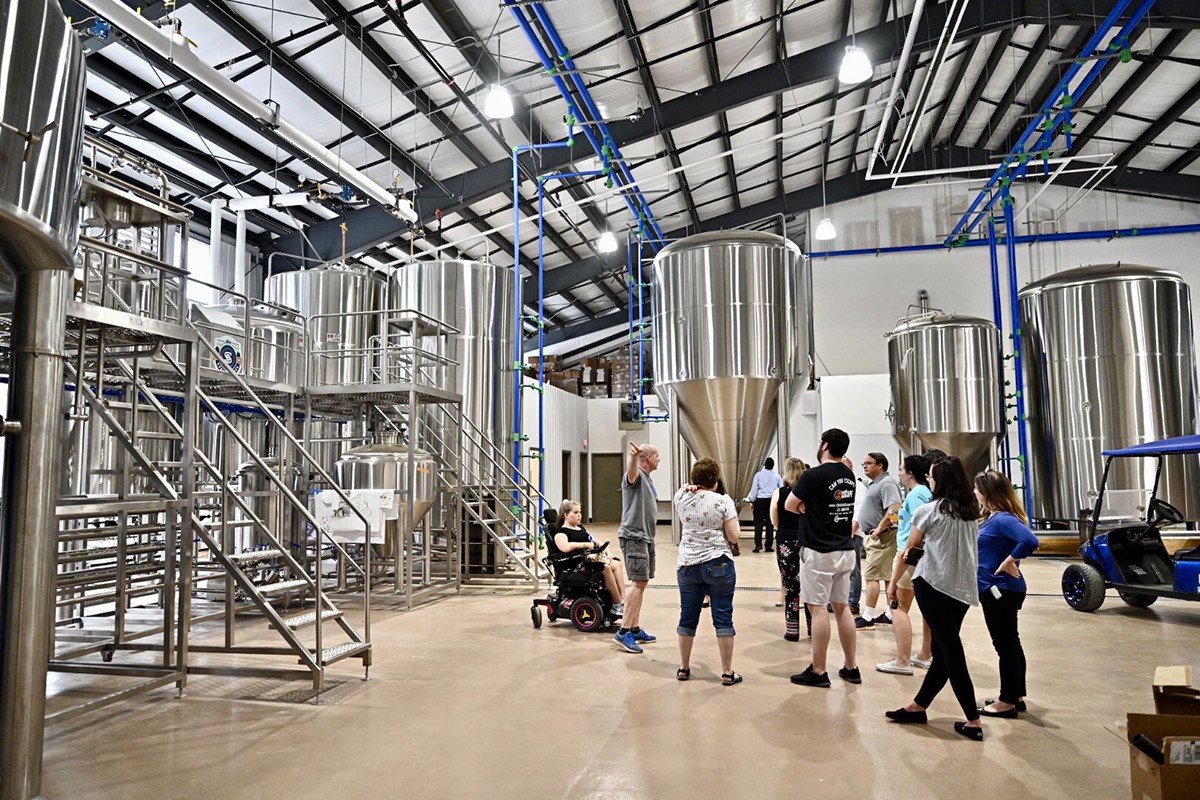 On a tour of the Hop Springs facility Thursday, May 23, visitors learn about the brew house on the left and the large fermentation and regular tanks in the room. MTSU and Hop Springs celebrated with a grand opening of the facility. (MTSU photo by J. Intintoli)

Jones said it is a lab that “can do analysis for companies all across the country. It can collect data. All of our tours will go through the sensory lab. I can find out colors, names of new beers, names of carpet. Whatever it is, we can gather that data, sell that data back to the company requesting the research (and) both of those labs are functioning.

For College of Basic and Applied Sciences Dean Bud Fischer, “the best part is our students get the opportunity to see the whole process while getting to perform analytical analysis and sensory testing.” He added it has led to internships for several of the first-time graduates with Yoplait yogurt, Hop Springs and others.

Kelly Beam with the Rutherford County Chamber of Commerce called the facility “one of the new jewels of the community” and shared how MTSU fermentation science and Hop Springs have formed a great partnership.

Fermentation science has had its first graduating class of six students, who are now working in the industry.

In a small group later, Jones said how Thursdays have become an “MTSU night” with “Trivia and MTSU True Brew” — live music featuring university students starting at 4 p.m. and Brainiac Trivia at 7 p.m. He also discussed allowing MTSU students to utilize some of Hop Springs’ outdoor activities for free. 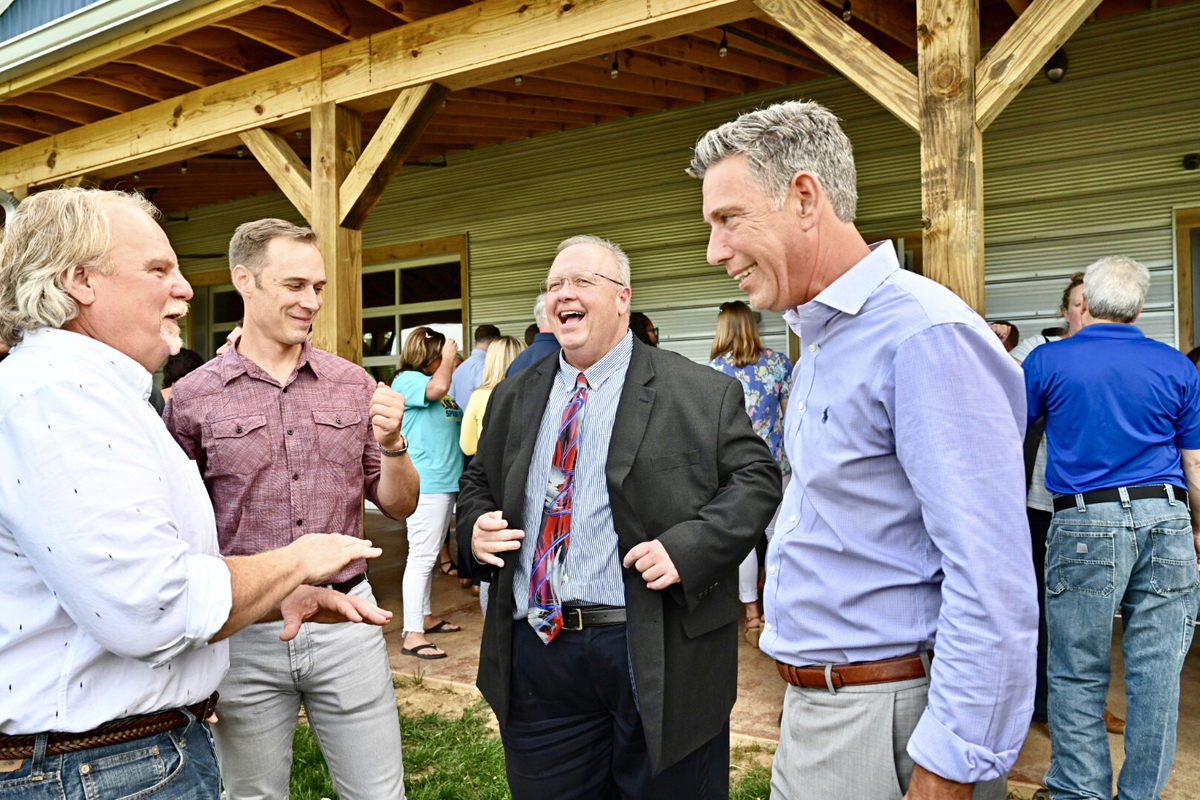 Hop Springs will host WMOT Roots Radio’s 895 Fest on May 31-June 1, the first music festival to be held at the new venue. It will feature Rodney Crowell, Lee Roy Parnell, Mandy Barnett, Sarah Potenza and a number of other Americana entertainers. Two-day ticket packages are available on Eventbrite. WMOT is found at 89.5 on the FM dial.

To learn more about the fermentation science program, call 615-898-2421 or email Tony.Johnston@mtsu. The program has gained interest from prospective students from all across the country.

In addition to numerous craft beers, customers can purchase a craft root beer and extremely popular MTSU chocolate milk along with a menu of food items. To learn more, visit https://www.hopspringstn.com or call 615-628-8776. 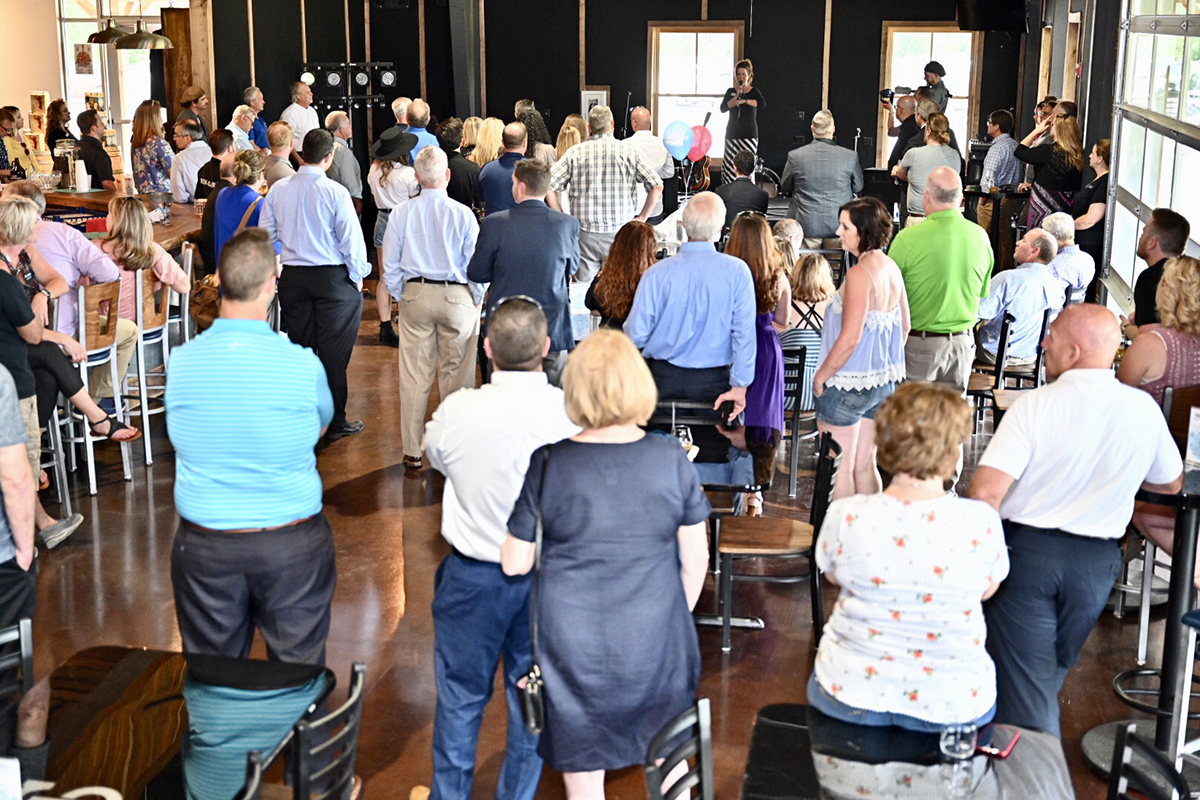 People attending the Thursday, May 23, grand opening of Hop Springs Beer Park in Murfreesboro and its partnership with MTSU fermentation science listen as Kelly Beam with the Rutherford County Chamber of Commerce talks about “one of the new jewels of the community.” About 150 invited guests took tours, participated in the ribbon-cutting ceremony and learned about an academic side to the agritourism venue. (MTSU photo by J. Intintoli)