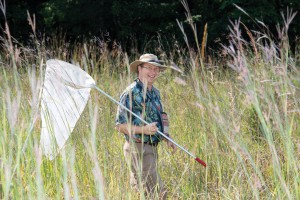 At an age when most kids were sitting on the family room floor watching Captain Kangaroo, Andy Brower was running across the green hills of Trinidad, watching his parents collect butterflies. Both were renowned entomologists: his mother, Jane, conducted groundbreaking research on butterfly mimicry, the protective adaptation by which one species develops the markings of another; his father, Lincoln, built on her research and also received acclaim for his study of the unique migratory pattern of the monarch butterfly. The scientific term “Browerian mimicry” was named for them. (“My parents were high school sweethearts,” Brower says. “Nerdy, bug-collecting sweethearts.”)

By age seven, Andy had tagged along on several research trips to Trinidad and, shepherded by graduate assistants, amassed his own “little-kid butterfly collection” of brightly colored tropical species.

Now, Dr. Brower is a renowned entomologist in his own right. A graduate of Yale and Cornell, he conducted postdoctoral research at the Museum of Natural History and the Smithsonian Institution, and he has published more than 60 peer-reviewed articles and become an internationally recognized expert on butterfly evolution.

In 2006, he left Oregon State University to join the biology faculty at MTSU, where he recently earned the University’s Distinguished Research Award.

One of Brower’s advantages over his parents is technology they didn’t have that allows him to study butterflies at the chromosomal level. Over the past 20 years, he has been piecing together an evolutionary history of a group of South American butterflies, studying their DNA to figure out how certain mimetic patterns developed over time in that continent’s diverse geography. Did those patterns stay essentially the same, he wondered, or did they change—and what role did genetics play in the process? He hypothesized that the butterflies evolved their wing patterns independently and “mimicked” one another many times in different areas. When he began the research, he says, “The access we had to the genome was pretty limited. It’s much broader nowadays, but subsequent research has largely borne out what I said.”

Brower has secured more than $1 million in external funding for his research, and he just received funding from the National Science Foundation to begin new fieldwork in South America. He and several Brazilian scientists will collaborate with the American Museum of Natural History, the New York Botanical Garden, the Field Museum in Chicago, and the Natural History Museum of Los Angeles County to construct a Pleistocene history of the Amazon Basin. “We’ll be looking at genetic patterns of variation in a variety of model organisms including birds, monkeys, trees, and then butterflies,” he says. “We’re going to try to do some next-generation sequencing, which is something I haven’t done before.” He hopes to begin in the spring.

Researchers like Brower are playing beat the clock, because thousands of species of plants and animals are threatened with extinction each year. “There are too many people, the climate is changing, and it’s an ecological catastrophe for most other living things in the world right now,” he says. “And as countries like China and Brazil become more economically advanced, it speeds up the destruction of natural resources—they get whittled down to little national parks and places like that.” The next few decades will be the most critical in history for understanding and preserving biodiversity, Brower says—and that requires coordinated, systematic research.

To promote that collaborative mission, Brower has added his expertise to the Tree of Life Project, a web-based “family tree” charting genetic interconnections among all living things. Scientists and nature enthusiasts around the world have contributed to 10,000 web pages, each devoted to a different group of plant or animal, from tyrannosaurs to fungi. (Thanks to Brower, it includes more than 40 varieties of Heliconius butterfly alone.) It is an ambitious undertaking, a blueprint of the evolution of life on earth. 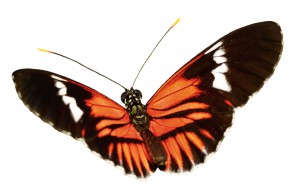 Because Darwinian theory underpins Brower’s research—mimicry is evolution by natural selection—he’s well aware of the attendant political and religious baggage. While his own fieldwork never crosses the perilous intersection of human and ape, he does teach an evolution course required for biology majors. Brower begins by acknowledging to his students that a majority of Americans reportedly don’t believe in evolution—and then he reminds them that for scientific purposes, absolute truths are less important than hypotheses and data, the framework for understanding biology. “You don’t have to believe it,” he tells them, “but you’ve got to understand it.”

To understand. If work like Andy Brower’s could be distilled to a single concept, that would be it. Unlike applied science, whose goal is problem solving (often through the development of marketable technology), basic science has no agenda beyond furthering understanding of the natural world.

Certainly applied science is built upon that understanding: as Nobel prize–winning astrophysicist George Smoot once noted, “If we only did applied research, we would still be making better spears.”

But as academia pushes the more lucrative applied side, Brower says he feels fortunate to do what he does for a living. “My work is like art, in a sense, and my artistic medium is that I generate stories about the evolutionary history of butterflies.” When he tells those stories well, he doesn’t just help people understand biodiversity—he gets them excited about it. Then, perhaps, they’ll be motivated to preserve it.