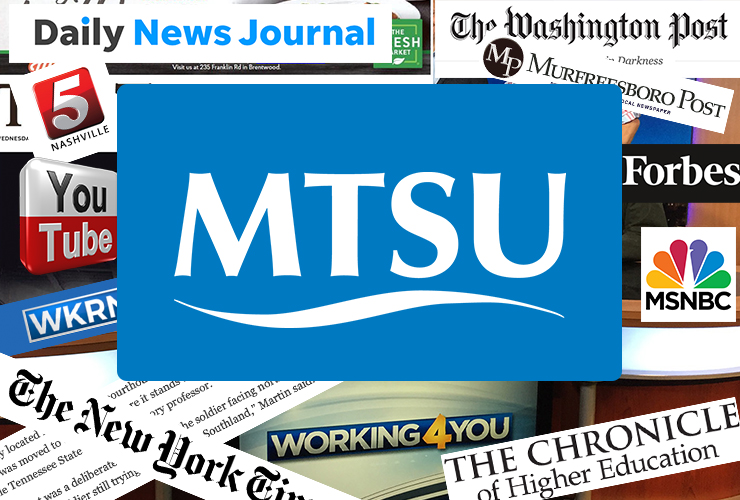 • Dr. Neda Naseri, a lecturer in the Department of Physics and Astronomy, co-authored an academic research paper on electron energization dynamics. The article, which was published May 5 in “Scientific Reports,” can be accessed here.

• Dr. John Vile, dean of the University Honors College and a Constitutional law scholar, explained how the nominating process for potential U.S. Supreme Court justices has lowered the public’s faith in governmental institutions in the May 4 edition of the “Listening to America with Clay Jenkinson” podcast. The audio and transcript, which were posted at http://www.governing.com, can be found here.

Vile also explained the history of the Roe v. Wade Supreme Court case on the May 12 edition of “OpenLine” on NewsChannel5+ in Nashville. The video can be seen here.

Vile offered his analysis of the leaked draft opinion on a Mississippi case challenging Roe v. Wade and whether the 1973 decision will be overturned in a May 14 article at http://www.christianpost.com. The story is available here.

• Dr. Mei Han, director of the Center for Chinese Music and Culture, directed the MTSU Chinese Ensemble in concert April 26 and 27 with musicians from the University of North Texas. The video, which was posted to YouTube May 6, can be seen here.

• Dr. Tony Johnston, a professor of agriculture, explained MTSU’s fermentation science degree in a May 6 interview on WGNS Radio in Murfreesboro. The audio and transcript can be accessed here.

• Dr. Andrei Korobkov, a professor of political science and international relations, was interviewed May 8 by the TRT network in Turkey on the evacuation of Ukrainian civilians from the Mariupol steel plant in Ukraine. The video can be seen here.

• Ken Paulson, director of the Free Speech Center, analyzed a bill passed by the Tennessee General Assembly to allow public school libraries to ban books considered to be “dangerous” on the May 11 edition of “MorningLine” on NewsChannel5+ in Nashville. The video can be viewed here.

• Dr. David Steffensen Jr., an assistant professor of management, discussed how the stress from work emails can spill over into home and family life in a May 11 report that aired on WXTL-TV in Tallahassee, Florida, and more than 40 other television stations. The video and transcript are available here.

• Billy Pittard, chair of the Department of Journalism and Strategic Media, described the type of images that can be created with the department’s new XR Extended Reality Stage for a May 12 report by WTVF-TV in Nashville. The video and transcript can be accessed here.

Pittard also explained the new technology for a May 12 story in the Daily News Journal of Murfreesboro. That story can be read here.

• Craig Myers, an editorial assistant for the Division of Information Technology, explained why he decided to embark on a humanitarian mission to war-torn Ukraine in a May 16 story for Main Street Nashville. His comments are available here.

• Dr. Perry Cotham, a retired professor of communication studies, wrote a column about how legendary orator Stephen Douglas became an ally of President Abraham Lincoln after losing his own bid for the presidency. The column, which was published May 17 by The Tennessean, can be accessed here.

• Dr. Amy Harris, a professor of information systems analytics, explained how to get into the information technology professions in a May 18 video for the Greater Nashville Technology Council. The video can be viewed here.

• Dr. Alisa Hass, an assistant professor of geosciences, asserted that heat mapping in urban areas can help city officials better understand how to mitigate extreme heat in a May 18 story at http://www.gcanews.com. Her views can be read here.