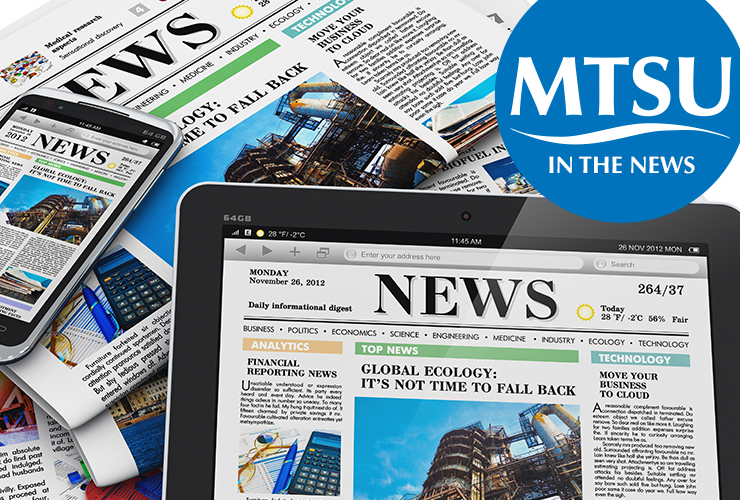 Several media platforms recently posted the insights of MTSU faculty on various topics, including national politics, climate change, dyslexia, urban heat, the cost of a new stadium and the economy, among other issues.

• Dr. Sanjay Asthana, a professor of media studies, delivered a presentation titled “Geography, Media, Environment: Reflections on Earth Ontologies and the Human Finitude” at a climate change conference by the Council for Earth Leadership and Sustainability Aug. 6 in Telangana, India. Video of his lecture, which has been posted to YouTube, can be viewed here.

• Dr. John Vile, dean of the University Honors College and a political scientist, discussed national politics on “MorningLine” on NewsChannel5+ in Nashville. The video, which was posted Aug. 8, is available here.

Vile wrote an editorial calling on citizens to become better educated in order to preserve democracy. The column, which was published Aug. 11 in The Tennessean, can be read here.

• Dr. Richard Tarpey, an assistant professor of management, talked about whether the United States is in a recession on “MorningLine” on NewsChannel5+ in Nashville. The video, which was posted Aug. 8, is available here.

• Dr. Ben Stickle, associate professor of criminal justice administration; Dr. Trisha Farwell, an associate professor of advertising and public relations; and Dr. Denise Shackelford, an assistant professor of recording industry, delivered a virtual presentation of their research into product placement in rap music at the 2022 Media and Entertainment Industry Educators Association Summit. The video, which was posted to YouTube Aug. 9, can be seen here.

• Dr. Michelle Conceison, an assistant professor of recording industry, delivered a virtual presentation of her research into the study of diversity in the music industry at the 2022 Media and Entertainment Industry Educators Association Summit. The video, which was posted to YouTube Aug. 9, can be seen here.

• Kent Syler, a professor of political science and international relations, explained the low voter turnout in Tennessee’s Aug. 4 primary election in an Aug. 10 article in The Tennessean. His views can be accessed here.

• Dr. Daniel Smith, director of the Political Economy Research Institute, co-authored an editorial cautioning Nashville taxpayers to be wary as Mayor John Cooper seeks pay for a new stadium for the Tennessee Titans with tax revenues. The column, which was published Aug. 10 by the Tennessee Star, can be read here.

Smith and Gabriel F. Benzecry, a Ph.D. fellow in economics with the Political Economy Research Institute, co-authored a column about the prohibition of street vendors in downtown Nashville that was published Aug. 11 in The Tennessean. The editorial and video are available here.

• Dr. Tim Odegard, holder of the Katherine Davis Murfree Chair of Excellence in Dyslexic Studies, said schools are having difficulty identifying dyslexic students when so many students are struggling with reading in an Aug. 10 article at https://www.laist.com. His comments can be accessed here.

• Dr. Alisa Hass, an assistant professor of geosciences, co-hosted a virtual presentation on urban heat islands on “Sustainable in the City,” a livestreamed series by Zero Waste Nashville and Urban Green Lab. The video, which was posted to YouTube Aug. 10, can be seen here.

• Dr. Rafet al-Tobasei, an assistant professor of computer science, co-authored a research paper on genetic reactions in Nile tilapia that have been deprived of food. The article was published Aug. 12 by the academic journal Cells and can be read here.