Eight MTSU grads ‘JET’ off to Japan to teach Engli...

The Japanese language has nearly two dozen words for all the shades of indigo blue. Perhaps there’ll soon be a new word for “True Blue,” too, now that a record number of MTSU graduates will join that country’s most prestigious teaching exchange program in August.

Eight MTSU alumni will soon begin their new yearlong adventure with the Japan Exchange and Teaching Program, or JET, where they’ll live and work in communities across that nation.

Jetting off on this cultural adventure are:

• Rebecca Clippard of Murfreesboro, a 2018 University Honors College grad who earned a 4.0 GPA and dual Bachelor of Science and Bachelor of Arts language degrees in Spanish and Japanese, respectively. She’ll be teaching in Minamisatsuma in Kagoshima Prefecture and studied in Japan with a 2016 Phi Kappa Phi Study Abroad Scholarship.

• Caleb Dunaway, a Henderson, Tennessee, native who earned dual MTSU bachelor’s degrees in English and Japanese this past May. He also studied abroad for a year at Saitama University in suburban Tokyo.

• Chris Johnson, a Smyrna native now living in Nashville who earned a 2014 bachelor’s degree in computer science from the College of Basic and Applied Sciences. Also a study-abroad student at Saitama University, he minored in Japanese and mathematics and was part of a student team that developed the MTSU Mobile App.

• Shannon Wilkinson of Antioch, a Metro Nashville Public Schools elementary school teacher who earned her English as a Second Language post-graduate certification from MTSU’s University College in 2018. She’s taking her teaching skills to Kawanishi, Hyogo, for the next year.

“This is truly the opportunity of a lifetime that I’ve been looking forward to since my freshman year,” said Cetinel. She’s set up a new Instagram account, @ashleysaitama, where she intends to share her adventures.

MTSU has been a part of the JET Program since 2008 and has sent 25 participants to Japan during those 11 years. Organizers say that eight assistantships from one university in a single year is quite an accomplishment.

“We want people who are passionate about Japan,” said Tye Ebel, coordinator for the JET Program at the Consulate-General of Japan in Nashville, where the service region covers Tennessee along with Arkansas, Kentucky, Louisiana and Mississippi.

“That’s one of the reasons that MTSU students stand out: it’s because you have such a strong Japanese language program there on campus. It’s been a great school to work with. MTSU is usually one of the powerhouses in the state as far as reliability … to send several students each year for the JET Program, but this year, these eight graduates bring it up almost to the national level.”

The JET Program, the only teaching exchange program managed by the Japanese government, began in 1987 and has welcomed more than 66,000 participants from around the world, including almost 34,000 Americans.

About 5,000 U.S. citizens apply each year for a yearlong contract with a five-year renewal option; Japan chooses about 1,000. The assistantships feature a first-year salary of about $31,000 and include health insurance and subsidized housing.

JET Program participants work as assistant language teachers in Japanese public and private schools or as interpreters and translators in local government offices, most often in smaller towns and villages.

Dr. Priya Ananth, who teaches Japanese and coordinates the Japanese Language Program in MTSU’s Department of World Languages, Literatures and Cultures, said the JET process is a year-round effort, launching each fall with informational sessions for students and help with applications, reference letters and interview preparation.

Applications are due in November. Each consulate interviews selected applicants in January and February, decisions are announced in April, and the new JETs depart in July and August for their year in Japan.

“I’ve been doing this for 10 years, since 2009, and this year we did a panel … with MTSU alumni who were JET participants talking about their experiences,” Ananth said. “In addition, we invited Tye Ebel to do a one-day special event at MTSU, where he led multiple information sessions on the JET program. ​These sessions were open to all MTSU students, and that was another reason for a larger pool of great applicants this year.”

She noted that Tennessee and Japan’s strong, decades-long economic and cultural partnerships encourage educational and business exchanges like the JET Program.

“JET’s very popular for those interested in teaching, and there are other, privately run programs … that are always looking for people with employment opportunities,” the professor said. “Japan also is putting a lot of focus now on attracting more English-speaking people this year because they’re hosting the Tokyo Olympics next year.”

MTSU’s participation in the JET Program is only one facet of the study, research, teaching and other unique educational opportunities coordinated via the University Honors College’s Undergraduate Fellowship Office.

Laura Clippard, international fellowships and Honors College coordinator, helps students earn scholarships, awards and fellowships from organizations ranging from the Fulbright Program to the Peace Corps. She recently returned from her own two-week Fulbright adventure in Japan, the International Education Administrators seminars, where she learned more about the country’s culture and education system.

“We encourage students with good communication skills, good community involvement, strong academics and leadership to consider fellowships like JET and Fulbright, because you want someone for JET to be conscientious and represent the United States in a positive way,” said Clippard.

“They want people who are very interested in the culture of Japan and are very flexible and have an interest in teaching and communication.”

Ebel at the consulate urged those interested in the JET Program, regardless of their fluency in Japanese, to learn more and prepare an application to be a “grass-roots ambassador.”

“The more the merrier!” he said. “It’s not just about teaching kids. You’re giving those kids and giving your host communities a window into what it is to be American, what it is to be from Tennessee. You’re really helping to build bridges and strengthen that bond between the U.S. and Japan.”

A video with more details about the JET Program is available above. For more information about the Japan Exchange and Teaching Program, visit https://jetprogramusa.org. 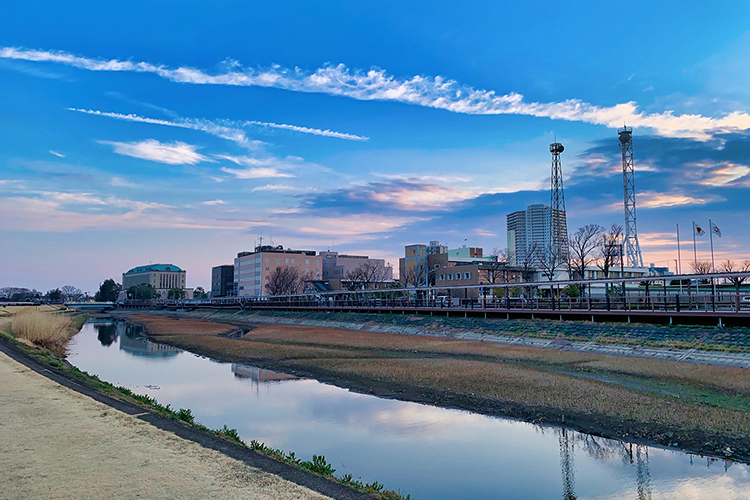 The sun begins to set on an early spring afternoon in Koshigaya, Japan, a Tokyo suburb and regional commercial center located in Japan’s Saitama Prefecture, where MTSU alumna Ashley Cetinel will be living for the next year and teaching English at three area high schools. Cetinel is one of eight MTSU graduates participating in the prestigious Japan Exchange and Teaching Program for 2019-20, thanks to the Consulate-General of Japan in Nashville. (Photo courtesy of Pixabay)