Alumna, now a Buddhist nun, outlines her life on ‘...

Alumna, now a Buddhist nun, outlines her life on ‘MTSU On the Record’ 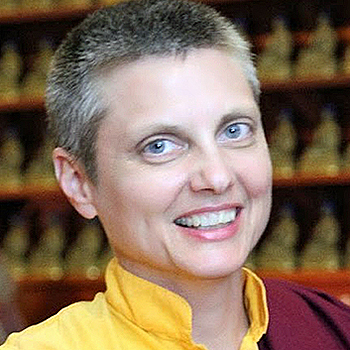 MTSU alumna Dolma Johanison, whose personal path has led her from toting a gun to becoming a nun, was the guest on a recent edition of the “MTSU On the Record” radio program.

Host Gina Logue’s interview with Johanison originally aired July 28 on WMOT-FM (89.5 and www.wmot.org ). You can listen to their conversation here.

Johanison graduated from MTSU in 1988 with a bachelor’s degree in criminal justice. Her career includes a stint with the Army National Guard, a job as a criminal analyst at the Pentagon and her current profession as an acupuncturist in Poolesville, Maryland.

She considers her conversion to Buddhism, however, to be the defining moment of her life. In 2008, she took more than 200 vows at Poolesville’s Kunyang Padyul Choling temple to become a nun, dedicating her life to alleviating suffering wherever she finds it.

“We all possess what is referred to as ‘the Buddha seed,’” Johanison said. “And ‘the Buddha seed,’ upon watering and nourishment, will grow and flourish internally, reaching our spiritual attainment, ascending to a higher level of being.”