MTSU alumna Keel takes reins of College of Media a... 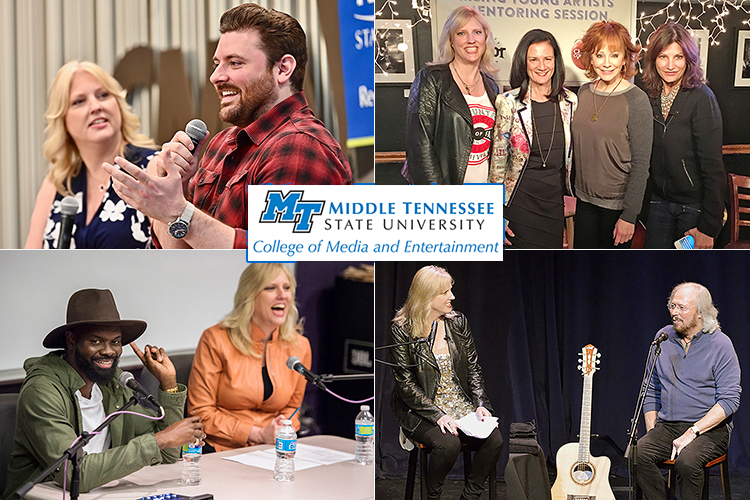 Beverly Keel, chair of MTSU’s top-ranked Department of Recording Industry, will take the reins of the university’s College of Media and Entertainment as its new dean, University Provost Mark Byrnes announced to campus Wednesday, Oct. 23.

Keel, a six-time honoree in the Nashville Business Journal Women in Music City Awards and a member of its Hall of Fame, will begin her new role Jan. 1.

“I want to provide our students with the opportunities, knowledge and experience necessary to compete in the quickly changing workplace,” Keel said. “I want to add value to a degree from MTSU’s College of Media and Entertainment and do work that continues to make our faculty, staff and alumni proud.”

In his announcement, Byrnes credited Keel’s “significant experience in journalism and media arts as well as in the recording industry,” the three core disciplines represented by the college.

MTSU President Sidney A. McPhee echoed that point, adding, “Chair Keel’s deep and extensive ties to the recording industry, as well as her considerable experience in journalism and strategic media, elevated her to the top of an impressive list of finalists.”

Keel, who received her bachelor’s degree from MTSU in 1988, joined the recording industry faculty in 1995 and was named chair of the department in 2013.

“Attending MTSU was one of the best decisions of my life because it prepared me for a multifaceted career in media and entertainment and profoundly shaped my life,” she said.

Keel, who will be the first female dean in the college’s history, joined forces with Tracy Gershon and Leslie Fram in 2014 to create Change the Conversation, a coalition designed to help fight gender inequality in country music.

During her tenure at MTSU, she also served as director of the John Seigenthaler Chair of Excellence in First Amendment Studies and as president of the International Association for the Study of Popular Music-US.

She spent a decade as the Nashville correspondent for People magazine and was the celebrity columnist at The Tennessean newspaper for two years, winning the Charlie Lamb Award for Excellence in Country Music Journalism. 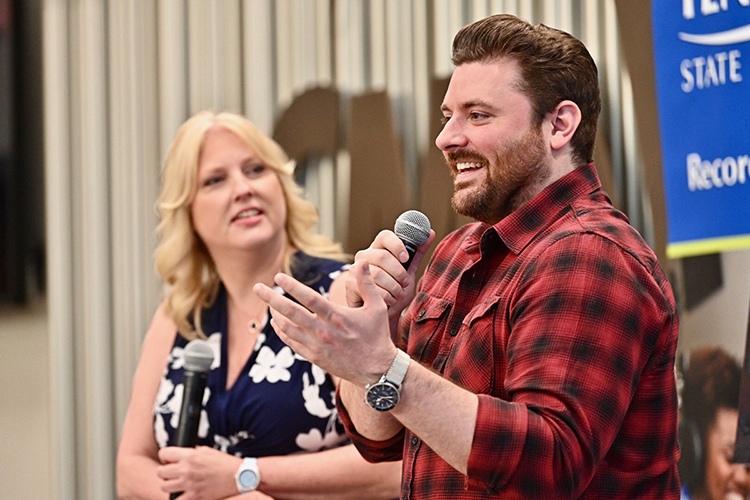 A former music industry columnist for the Nashville Scene and Nashville Banner newspapers, her journalism has received awards from The Associated Press and the Association of American Newsweeklies.

Keel has served as a commentator on country music personalities and events and has been featured on ABC’s “Six Degrees of Martina McBride” and CBS’ ”48 Hours Mystery” as well as numerous shows on VH-1, Bravo, CMT, GAC and other networks. She has been quoted as a music expert in publications such as The Washington Post, Chicago Tribune and Reader’s Digest.

In 2015, Keel was inducted into the Metro Nashville Public Schools Hall of Fame; in 2016 she was named an honoree of the YWCA Academy for Women of Achievement; and this year she was named to the Source Hall of Fame, which recognizes accomplished women professionals working in Nashville’s entertainment industry. 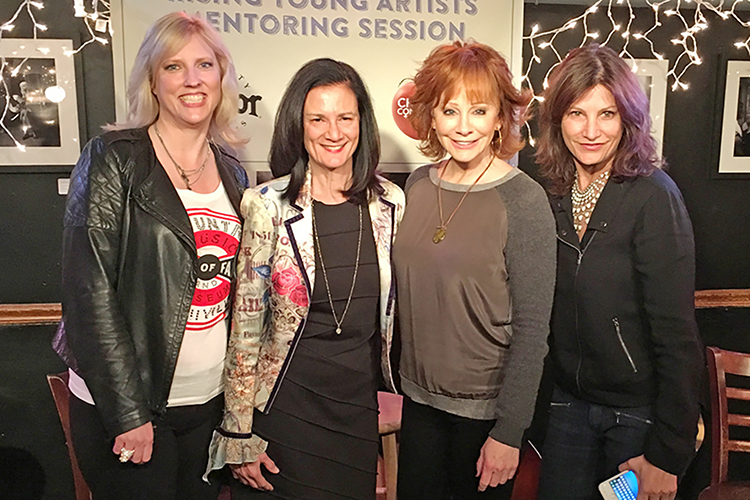 MTSU alumna and Department of Recording Industry Chair Beverly Keel, left, is shown with her co-founders of Change the Conversation, a coalition designed to help fight gender inequality in country music group, and country superstar Reba McEntire during a special 2016 mentoring sessions event for young artists at the Bluebird Café in Nashville, Tennessee. Keel, who has been named as MTSU’s new dean of the College of Media and Entertainment, is shown with Leslie Fram, CMT senior vice president and Change the Conversation co-founder; McEntire; and Tracy Gershon, Rounder Records Group’s vice president of A&R and Change the Conversation co-founder. (File photo courtesy of Justin McIntosh)

A Nashville native, she earned her master’s degree from the Columbia University Graduate School of Journalism.

In 2019, MTSU’s recording industry department made Billboard’s annual list of America’s top music business schools for the sixth year, once again joining its counterparts across the country as top producers of ready-to-work music industry pros.

Keel was also instrumental in securing the support of former student and multiplatinum country artist Chris Young and Country Music Hall of Famer Charlie Daniels for two centers on the MTSU campus that bear the celebrities’ names.

“Being named dean of the College of Media and Entertainment is the greatest honor of my career,” she said. “I take this responsibility not only seriously, but also personally, because I was once one of the students walking these very halls.” 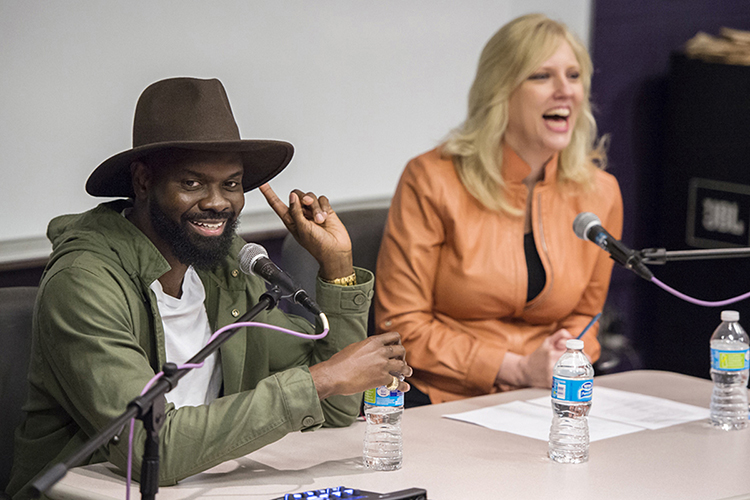 MTSU alumna and Department of Recording Industry Chair Beverly Keel, right, reacts as fellow grad Torrance Esmond, answers a student’s question during Esmond’s March 2015 return visit to campus. Esmond, who’s known professionally as “Street Symphony,” is a two-time Grammy winner and multiple nominee based in Atlanta who established the “Street Symphony Scholarship” for MTSU recording industry students. Keel has been named as MTSU’s new dean of the College of Media and Entertainment and will take the reins Jan. 1. (MTSU file photo by Andy Heidt)

One of the largest communication programs in the nation, MTSU’s College of Media and Entertainment offers degree concentrations in 14 major areas — ranging from journalism to digital media and media management to recording industry management — and is accredited by the Association for Education in Journalism and Mass Communication.

In addition to the Department of Recording Industry, the college includes a Department of Media Arts and a School of Journalism and Strategic Media and offers Bachelor of Science degrees in media and entertainment, animation, video and film production, interactive media, journalism, recording industry and audio production; a Master of Fine Arts in Recording Arts Technologies degree; and a Master of Science in Media and Communication.

Along with the Seigenthaler Chair and the Free Speech Center, the college is home to WMOT-FM, a 100,000-watt public radio station, the Center for Innovation in Media and the Center for Popular Music. 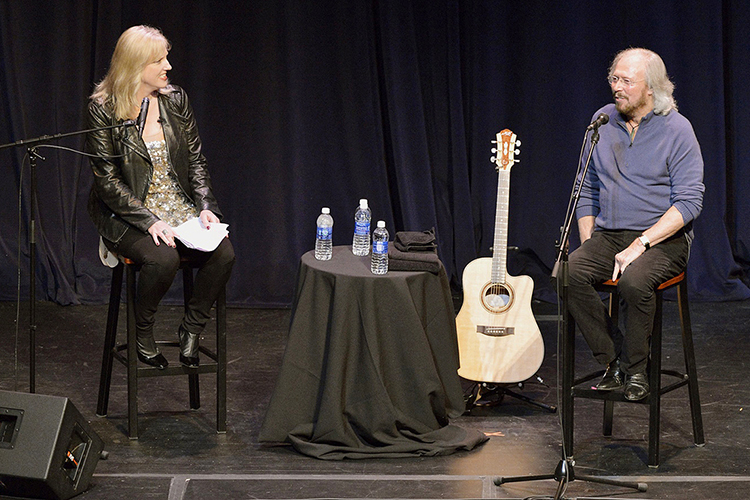 Music icon Barry Gibb, right, is caught off-guard by a question from Beverly Keel, chair of MTSU’s Department of Recording Industry, during a special performance-lecture inside the university’s Tucker Theatre Oct. 28, 2013. Keel has been named as MTSU’s new dean of the College of Media and Entertainment and will take the reins Jan. 1, 2020. (MTSU file photo by Andy Heidt)