NASHVILLE, Tenn. — The amazing Alnassar triplets are preparing to enter MTSU. They will be dual-enrollment students next fall and full-fledged freshmen in the future.

After meeting the 13-year-old whiz kids, university President Sidney A. McPhee said he looks forward to their youthful vitality and presence becoming a part of campus soon.

Make that the Alnassar triplets plus one: Their mother, Khaeijah Alnassar, also will be a freshman in 2020, joining Zaynab, the elder sister by one minute, Fatimah and brother Ahmed when they take dual enrollment classes.

The Alnassar family was among more than 100 prospective high school and transfer students and several hundred others attending the MTSU True Blue Tour recruiting event Tuesday, Oct. 22, at the Millennium Maxwell House Hotel. 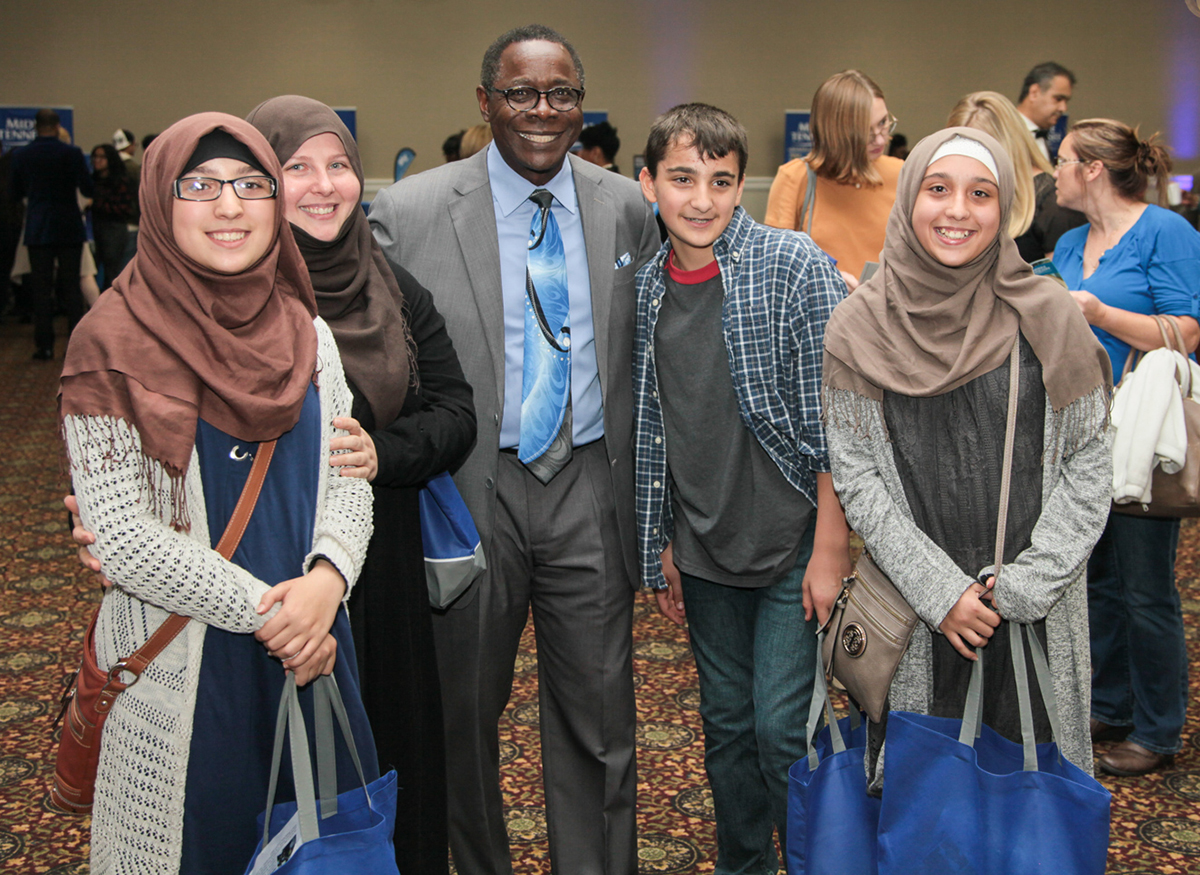 MTSU’s tour is taking the university to 14 cities in four states as it recruits prospective students for 2020 and beyond.

The Alnassar triplets are 10th-graders at Metro Nashville Public School’s Virtual Academy. Their mother has them on a 9 a.m.-to-5 p.m. academic routine.

“This is history,” McPhee said while talking with the family, acknowledging that this will be a first for the university.

“It’s really incredible. To have triplets and Mom as part of their education together … I’m just thrilled they selected MTSU. I look forward to seeing you all on campus.”

A proud Khaeijah Alnassar said her children “are ready to go to college.” They plan to be part of MTSU’s Dual Enrollment Program, where students can earn both high school and college credit hours from the same class.

The triplets are not only gifted academically but as artists, too. They are multiple award winners at the Tennessee State Fair, their art and crafts have been displayed at the La Vergne Public Library, and all three have published novels and attended nine weeks of summer camps this year.

Ahmed Alnassar, who will study pre-med at MTSU, is a trained boxer who attended MTSU Department of Aerospace aviation camps this summer.

“I want to be a surgeon or doctor and help people who can’t help themselves so I can make a difference,” he said. He added that if he chooses the heart surgeon route, it’s because a younger brother was born with 17 holes in his heart.

Fatimah Alnassar wants to major in biology and minor in animation. She also wants to be a physician.

“I want to go to other countries and give them the medical support they need,” she said, adding that with her animation training, she could produce a video or videos “to help fund charity organizations.”

Zaynab Alnassar wants to be a veterinarian and plans to study chemistry and biology at MTSU.

“I like having the opportunity MTSU provides,” she said. 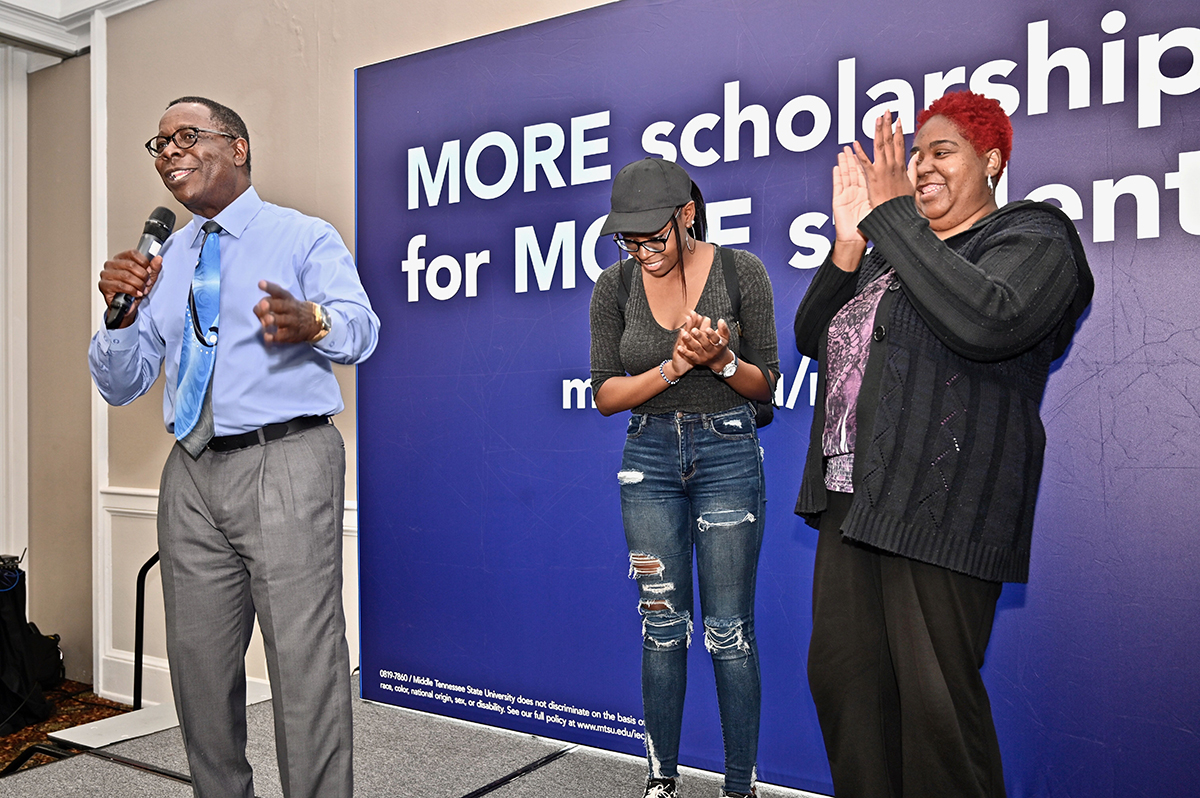 • Arianna Smith, 17, a Hume-Fogg Academic High School senior with an eye toward MTSU’s Department of Physics and Astronomy, walked out of the event with a $6,000 scholarship. “Awesome” is how Smith, who takes honors courses at Hume-Fogg, said she felt after her name was called. “God is good,” her mother, Casius Smith, added.

• Lauren Averill, 17, of Portland, Tennessee, and a Portland High senior with a 4.0 GPA and 33 ACT score, said she and her mother, Maureen Averill, are quite impressed with MTSU’s animation program, which is one of the best in the nation.

“I’m really excited to graduate from high school and get in the program,” Lauren Averill said. She also plans to apply for a Buchanan Fellowship — the top scholarship at MTSU — from the University Honors College.

• Josie Gillespie, 22, of Thompson’s Station, Tennessee, will graduate in May 2020 with an associate degree in graphic design from Columbia State Community College. She and her mother, Amanda Webb, have joined two True Blue Tour events and took a campus tour, all in October.

• George Samir caught McPhee’s attention when he learned Samir is a potential transfer from Tennessee Tech University, where he’s a civil engineering student. Samir’s name was drawn for a special MTSU blanket — and the president added a $1,000 scholarship to influence Samir’s decision.

• National Alumni Association President Shawn Johnson, a Class of ’93 grad in liberal arts, attended both the luncheon and student reception. The student reception audience heard from alumni James Payne, a 2006 music business graduate, and 2018 MTSU alumna Barbara Pafetti, who earned a Bachelor of Business Administration degree focusing on supply-chain management and graduated with distinction from the Honors College.

“We have one of the best music business programs in the world,” Payne told the crowd. “The friendships I made at MTSU meant the world to me. The MTSU experiences taught me valuable lessons.”

On deck for the True Blue Tour

MTSU administrators and staff will travel next to Chattanooga Tuesday, Oct. 29, to the Chattanooga Convention Center, before heading to Atlanta Wednesday, Oct. 30, to the Hyatt Regency Atlanta Perimeter at Villa Christina, 4000 Summit Blvd. NE. At both venues, MTSU will entertain counselors and community college staff with a 12:30 p.m. luncheon and students and families with a 6 p.m. reception 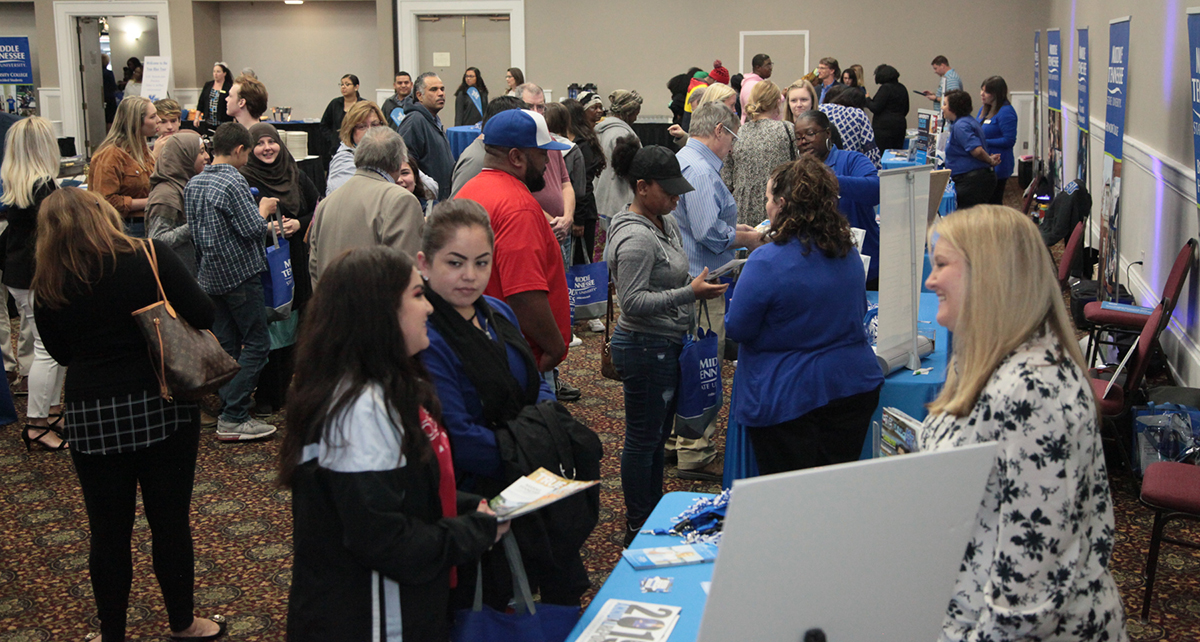 Part of the crowd attending the Nashville True Blue Tour visit Tuesday, Oct. 22, at the Millennium Maxwell House Hotel asks questions and learns more about the university from staffers, faculty and administrators. Attendees learned about MTSU’s more than 300 programs, housing, scholarships and more during the two-hour event. (MTSU photo by John Goodwin)