As MTSU’s Division I prowess grows, so does the attention it receives from both rule breakers and rule enforcers. 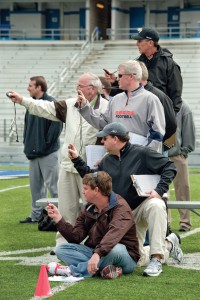 Field of Dreams: Coaches, scouts, and agents descend on the MTSU campus each spring to attend Pro Day, where MTSU football players hoping to ascend to the professional level take to the field to demonstrate their physical prowess.

Student-athletes play for the love of the game and, in the case of a few elite athletes, the prospect of financial rewards after graduation. That prospect of a future payday attracts agents who may be tempted to bend or break NCAA rules, usually at the expense of schools and students.

“If your signing bonus is $1 million, if there’s a potential to make a lot of money in the future with your athletic ability, they will be around,” says Associate Athletic Director Daryl Simpson, who leads MTSU’s efforts to comply with NCAA rules that are intended to protect the integrity of collegiate sports.

MTSU has developed an 800-page booklet to help guide undergraduate athletes through the maze of problems to avoid and rules to follow. The NCAA allows students to meet with agents, but they can’t enter into contracts or accept any “extra benefits” that other students wouldn’t get. That includes meals, transportation, or gifts. Doing so can jeopardize their eligibility to play and place the school at risk of sanctions.

The trap of accepting an extra benefit is easy to stumble into. The Blue Raider football program suffered a setback last season when quarterback Dwight Dasher accepted a $1,500 loan from an acquaintance. The University suspended Dasher for four games.

“If we had not, we would have had to forfeit every game he played,” says Terry Whiteside, dean of the College of Behavioral and Health Sciences. As faculty athletics advisor, Whiteside reports directly to MTSU President Sidney A. McPhee regarding the University’s compliance with NCAA regulations. “We’re playing by the rules, and we expect students to play by the rules,” says Whiteside, who reminds students of their priorities while at the University.

“At MTSU, we expect you to win, but we demand that you graduate,” he says.

Agents are supposed to register with the University, but there are no guarantees. That’s why Simpson devotes so much time and effort to education and communicating with coaches to see if “somebody questionable” is hanging around practices. Cell phones and social media such as Facebook make the job tougher.

“It’s hard for an 18-year-old kid to turn down gifts or money,” Simpson says. “So it’s about educating the kids.”

All the effort is necessary, even though problems are more likely to occur on campuses where large numbers of athletes enjoy the likelihood of multimillion dollar careers, Simpson says. Even now, the NCAA is mounting investigations at several large universities where athletes may have received favors from agents. For athletes in a mid-major sports program like MTSU’s, there’s less chance of falling victim. On a campus where about 300 students participate in team sports, eight were drafted by professional sports teams last year. One student-athlete, baseball star Bryce Brentz, was a first-round pick by the Boston Red Sox. Everybody carefully followed the rule book, Simpson says.

Wherever they turn up, shady agents could face prosecution or other penalties. Former U.S. Rep. Bart Gordon (‘71), was instrumental in passing the Sports Agent Responsibility and Trust Act (SPARTA), which empowers state attorneys general and the Federal Trade Commission to prosecute agents.

Gordon emphasizes that the weight of compliance still falls most heavily on schools and athletes. “The bottom line in all this is a sports agent has nothing to lose,” he says. But professional leagues may be beginning to take the problem more seriously, as well. Former agent Josh Luchs was decertified last year by the NFL Players Association after writing in Sports Illustrated magazine that he made payments to recruit college players.

As MTSU athletics continues to grow in prominence, the burden to protect athletes will continue to grow, as well. MTSU

Unscrupulous sports agents can cause
great damage to a university’s athletics program,
but if you ask Bruce Pearl or Jim Tressell, they’d probably
tell you some wounds are self-inflicted.
That’s why MTSU created “Compliance Corner” on its
website to help boosters avoid NCAA rules violations
that could result in sanctions against a student-athlete or
the University. There could even be serious consequences
for the offending booster, no matter how innocent the
mistake might seem.
“If you do things you aren’t supposed to
do, you are only hurting the school and
may be ‘disassociated.’ You wouldn’t be
allowed to go to games,” says Assistant
Athletic Director Daryl Simpson.
According to faculty athletics advisor
Terry Whiteside, the NCAA’s rules
are strict.
“We have a saying that if something
is just good old-fashioned Southern
hospitality, it’s probably an NCAA
rules violation,” he says half-jokingly.
Fortunately, boosters don’t have to guess at what’s
permitted and what’s out of bounds. The dos and don’ts
are spelled out at www.goblueraiders.com.
Examples include that MTSU student-athletes may
not receive a special discount, payment arrangement
or credit on a purchase (e.g., airline ticket,
clothing) or a service (e.g., laundry,
dry cleaning) from an MTSU
employee or an MTSU booster.
It is also not permissible to allow
MTSU student-athletes to use a
telephone or credit card for personal
reasons without charge or at a reduced cost.
Boosters at MTSU have not caused any difficulties
with the NCAA, but at other schools there have been
instances of “boosters run amok,” Simpson says. “A lot
of things don’t seem like a big deal, but the rules are in
place because someone did something.”
Be a fan. Follow the rules.