Ten Commandments up for discus.. 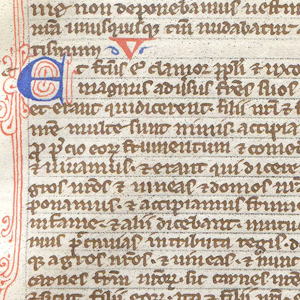 “Huaca Huaca Batch” is part of Assistant Professor Kathleen O’Connell’s book arts exhibit, “Crossing Time and Space,” on display now at MTSU’s James E. Walker Library. The final card reads “Inspired by the occasions that I have come across a huaca in Lima (Peru).” The Quechuas of South America use “huaca” to describe a revered object, sometimes a monument.

“The Art of the Page” features manuscript leaves from western Europe to India. The exhibit, which represents both Christian and Muslim cultures, includes secular and sacred texts and books produced before and after the onset of print technology.

Before and, in some parts of the world, even after the invention of moveable type, books were made by hand with elaborate script. Oversized initial letters, marginal glosses, gilding and the use of various ink colors characterize those distinctive tomes.

This display contains a teaching collection of manuscript and early print leaves as well as facsimile editions of manuscript books from medieval and later periods.

The second exhibit, “Crossing Time and Space,” features the work of Professor Kathleen O’Connell of MTSU’s Department of Art. She cites time, space and travel as major elements of her creative process.

This hand-written page from a medieval Bible is part of a new display, “The Art of the Page,” now at the Walker Library.

The exhibit on display at Walker Library highlights O’Connell’s book art produced during the last seven years. She also works in printmaking, drawing and sculpture and incorporates aspects of these media into her artists’ books. For photographs of her other works, visit www.kathleenoconnell.net.

Both exhibits are free and open to the public during regular library hours, and both will be on display on the library’s fourth floor through December 2012.