Making Your Voice Heard from Campus to Capitol

Making Your Voice Heard from Campus to Capitol 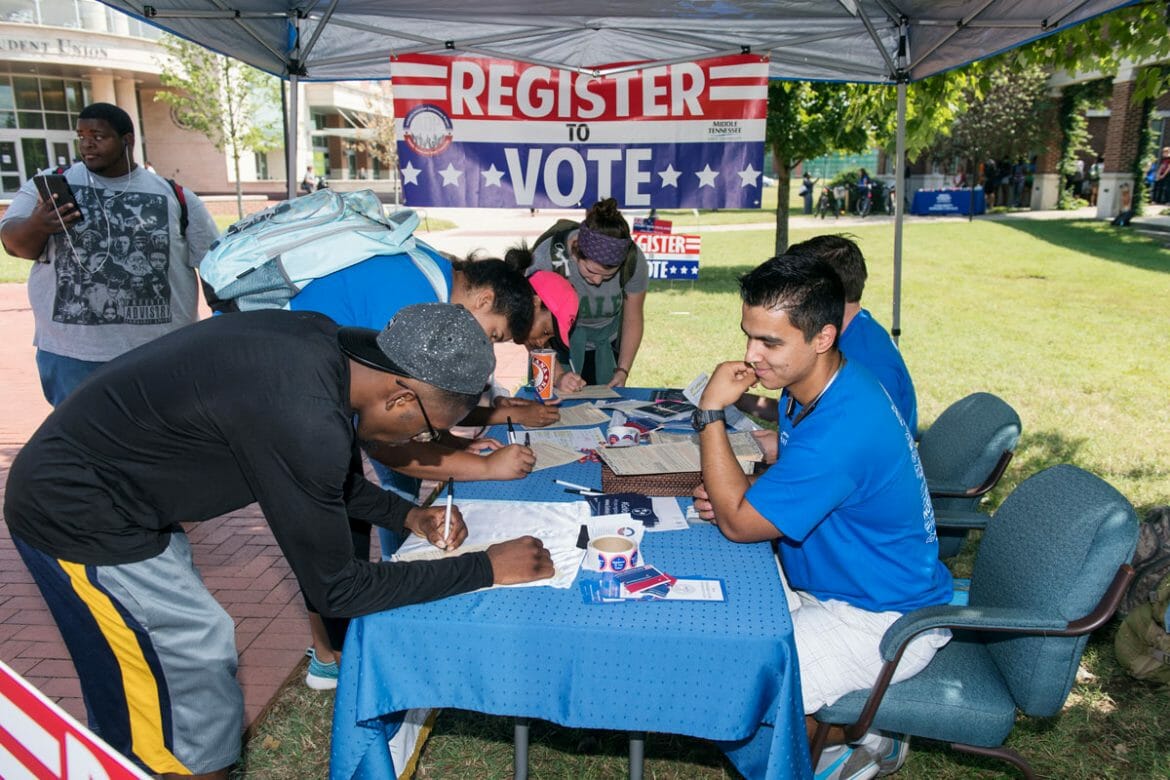 My dad loves coaching baseball. He has a simple philosophy that he gives his players when they’re the victim of a bad call: “Don’t do anything. Let me, the big loud guy, be the one that argues and gets in trouble.”

This is the kind of relationship we create when we elect people into public office. From Student Government Association Senators to State and U.S. Congressmen, those we vote for become our personal “big loud guy.” They devote a large chunk of time researching and finding solutions to issues you may face on your campus or in your community.

For example, there were many variables that went into building a new Student Union building at MTSU. SGA senators, voted into office by the student body, did the dirty work of researching those variables and debating how to go about massive project. If students attempted to work out something of this scale as individuals, there would likely be chaos. Who would lead the discussion? How would we come to a consensus on each individual detail? There is no telling how many generations of students would have come and gone before our Student Union would have been built.

This is why the Student Government Association was formed. Putting a set amount of people in an administration-supported organization, tasked with speaking up for those they represent, can encourage quick and positive change.

You also have officials representing you in local, state, and federal offices. They may get a bad rap but they are your connection to turning your opinion on those hot-button issues into action. Dealing with issues such as gun control and the environment without a contained, knowledgeable body would result in never-ending debate. They spend countless hours trying to come up with solutions that work for everyone they represent, which can be extremely difficult albeit necessary. Without these people, your voice would not be efficiently represented in decisions made by our country.

So, how do you take advantage of these resources and make your voice heard? In all honesty, it is as simple as you want it to be! You can just dip your toes into it, finding the right candidate for you and voting for them. To get the most out of it, you can go a step further and actively communicate with your representatives, help others get involved, or even run for office yourself. No matter how deep you want to dive into the process, it all starts with a single vote.

Voting is a simple yet odd process that leaves people wondering if it actually matters. On one hand, having a say in who speaks up for your issues is a major plus. On the other, how much impact can one measly vote make?

Even the most politically-engaged citizens have stopped and asked themselves that question. Trey Jones, a Political Science major and SGA Senator, says that it’s extremely important to vote, even if you don’t think yours matters. “It’s unfortunate to me that people pay taxes but don’t take time to vote on who they want deciding how to spend it, or in the case of SGA they pay tuition and fees and don’t vote on who they want to decide how to spend it,” he said. What he is basically saying is that you already are buying into the system. If you want any say as to how that system operates, you need to get out and vote.

Here is a challenge for you and a great jump-start to giving your voice more meaning:

Start with the Student Government Association and send an email to each representative of your college. You can find who represents you in SGA here. Talk about your background, your goals, and your issues that you have with campus, and they’d love to talk about how they can help.

Next, contact your local representatives. You are likely represented in both the county and city that you live in. If you live in Murfreesboro, here is where you can contact City Council. You’ll also want to contact the Rutherford County Commission, which is broken up into districts. You’ll find your representatives here. Once again, tell them who you are and the issues you care about. If you live outside of this area, a quick Google search will point you in the right direction.

Moving on up, contact your State and U.S. Representatives and Senators. To find the complete list of legislators who represent you, you can use this nifty tool. This is where you can talk about the issues you may have the strongest opinion about. With the ability to create federal law, these offices wield the most power. State legislators may not be able to do that, but they can make laws that are tailored to the needs of your specific state.

2. Find out which elections are coming up soon

Next, you should see when you’ll have your next chance to vote. Make a quick google search to check for elections in your area and ensure that you are registered to vote. Luckily, in the State of Tennessee, you can conveniently register online at GoVoteTN. In addition, MTSU has recently announced the True Blue Voter initiative, a partnership formed with the Rutherford County Election Commission. The Election Commission will be helping students at CUSTOMS orientation sessions register to vote and inform them of good voting practices.

Don’t live in Rutherford County and want to vote in an election back home without driving there? Absentee voting is just as easy and grants you flexibility on your Election Day. As long as you know your voting deadlines, voting has become a very simple process. To help you along, here is the election calendar if you are an MTSU student and/or live in Murfreesboro and Rutherford County:

Did the representative you contacted earlier not respond? Did he or she seem rude or uninterested in your opinion? This is where you have the opportunity to put someone more fitting of your needs into office. Now that you have a list of elections coming up, devote some time to research the candidates running for offices of which you are eligible to vote for. Pay attention to any campaign promises and their knowledge of the issues you feel most passionate about. Once again, you are hiring this person to decide how to best use your money. If you don’t see someone as your voice in the decision-making process, move on and find someone else who does.

As far as the Student Government Association is concerned, it can be really easy to find the candidate for you. The Executive Board debate is open to the public and live-streamed, and candidates are always looking for classes and organizations to campaign to. When election season rolls around, find out who is running and bring them in. Spreading their message via word-of-mouth is the primary campaign method on a college campus, so it is just a matter of finding someone with the same passion for your issues.

Finally, vote. Vote, vote, VOTE!. Bring your friends and family to vote. Bring your dog to vote (actually, maybe not. Service animals only, please). Vote in every election you can and encourage everyone you know to do the same. As mentioned countless times, voting is your key to letting your voice be heard. Your candidate may not win every time, but you will always be sending a message, which is what Democracy is all about. Whether you’re voting online for the SGA election or going to a voting center for the bigger ones, it is well worth the little bit of effort.

So get out there and find you that “big loud guy” to speak up for you. For every “bad call” or issue that you face, use your right as a voter to help create change. If my dad argues with umpires for free, your legislators will fight for you with a burning passion.