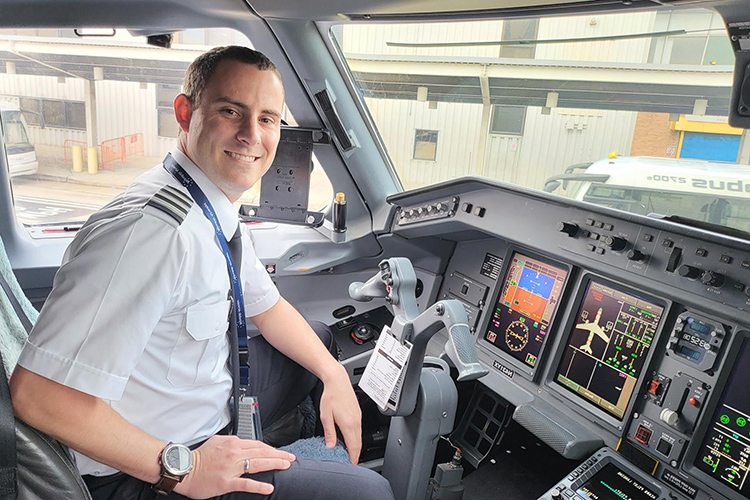 When Travis Houser, recent graduate of MTSU’s Aeronautical Science master’s program, finished his Marine service in 2014, he had no plans to become a pilot. He did not even have plans to attend college. But he had always dreamed of flying.

“I always wanted to be a pilot but couldn’t afford it, and I couldn’t afford college to be an officer in the Marines,” Houser said. “Being an aircraft mechanic got me close enough to that dream.”

Almost eight years later, Houser has hit nearly 1,500 flight hours as a first officer for Republic Airlines, and flying, unsurprisingly, is his favorite part of the new job.

“It is a ton of fun, especially going into New York and being at eye level with the skyscrapers,” he said.

Houser used his mechanic experience after leaving the military and a certification to land jobs doing aircraft maintenance for companies such as Boeing and Gulfstream. An opportunity with aerospace manufacturer Embraer in Nashville, Tennessee, prompted his move to Murfreesboro.

“Suddenly finding myself five minutes away from MTSU, I figured I might as well use my GI Bill to learn how to fly,” Houser said.

With his tuition and flight training covered along with a housing allowance, Houser pursued and graduated with his bachelor’s in aerospace with a concentration in professional pilot in 2020 — completing the degree in only two and a half years.

“My secret was full-time summer semesters and a boatload of studying,” he said. “I was extremely fortunate that my wife supported my endeavors. She did not complain a single time. Being extra studious was the least I could do while she supported our son and me.”

Graduating amid the height of coronavirus restrictions with financing from the GI Bill remaining and continued support at home from wife Amber and son Nikola, Houser went on to earn a master’s degree in aeronautical science with a concentration on safety and security management in fall 2021.

His undergraduate studies fulfilled the dreams he had growing up in Spencer, Tennessee, of flying a plane, and his graduate program expanded his understanding of flight safety and the importance of being a lifelong learner.

“The safety aspect really made me think more about how my actions can affect my flights and how I should learn from the mistakes of others and better myself,” Houser said. “Grad school taught me if you think you know it all, you don’t. Keep looking forward.”

Paul Craig, coordinator of the Master of Aeronautical Science Program and one of Houser’s professors, said Houser was always curious and took the extra step.

“When Travis received the good news that he had been hired by Republic Airlines, his new hire training week overlapped with the week of his master’s comprehensive exam,” Craig said. “Nine out of 10 students would have delayed the exam and graduation – but not Travis. Without saying a word, he passed the class and the exam!”

Craig said MTSU’s aviation safety and security concentration is unique because it focuses on real issues that graduates will face.

“We know that our graduates will soon become the decision-makers, so we take the curriculum out of the textbooks and into the real world,” Craig said. “The aviation safety class Travis took uses actual cases, some that are still unsolved. The students must become sleuths and try to crack mysteries to make real recommendations that can be applied in practice.”

It was Houser’s favorite class. “It was awesome thinking outside the box to solve the mystery with very little information,” he said.

Now living his pilot dream thanks to his hard work and True Blue education, Houser considered new dreams for the future.

“I think my long-term goal for now is to go to United Airlines,” he said.

To learn more about the opportunities with the university’s Aeronautical Science graduate programs, visit the website https://www.mtsu.edu/programs/aeronautical-science-ms/.